“Defending Jacob,” based on the hit book by William Landay and directed by Oscar nominee Morten Tyldum (“The Imitation Game”) suffers greatly from its format, stretching 120 minutes of story max into eight hours of episodic television. This is the kind of narrative that needs urgency and high stakes, but it’s drained of both by dragging out every revelation and development in each disappointing episode before limping to an unsatisfying conclusion, which, from what I understand, is drastically different than the book. The only reason to even consider looking at this high-budget misfire is the truly excellent work from Chris Evans and a few strong supporting performances. But with the amount of stuff out there to watch while we’re stuck at home, it’s sad how far down the list I would prioritize this project.

Jacob Barber (Jaeden Martell) has been accused of murder. The 14-year-old, upper class student has led a seemingly ordinary life, but all of that changes when his classmate Ben is found stabbed to death. When they find Jacob’s fingerprint on Ben and other kids start talking on social media about how Barber owned a knife he liked to show off at school, Andy Barber (Chris Evans) quickly becomes one of the only people who doesn’t think his son is a murderer. Even Jacob’s mother Laurie (Michelle Dockery) begins to question her son’s lack of empathy and dark sense of humor, wondering if she could have raised a sociopath. While Andy helps mount the defense with attorney Joanna Klein (Cherry Jones), his former colleague at the District Attorney’s office Neal Logiudice (Pablo Schreiber) builds a circumstantial but possibly convincing case.

Andy may be certain that Jacob is innocent but the show that bears his name plays fast and loose with viewer certainty. It’s one of those shows in which evidence for and against Jacob’s guilt bounces back and forth like a tennis match, designed to keep viewers wondering all the way to the end if he really did or not. To that end, there are other suspects, including a local sex offender and another classmate of Jacob’s, but most of “Defending Jacob” is spent in the Barber house, as Andy’s certainty drives him forward and Laurie’s uncertainty tears her apart.

Evans would have been excellent in the film version of “Defending Jacob,” but even his range and depth here suffers in a project that simply doesn’t justify its run time and can’t escape its dull “Prestige TV” visual style. You know how every episode of “Ozark” looks slightly washed in a blue filter? Yeah, Tyldum goes that route here too, and the results are depressingly sterile. The story of a child murder and the emotional tumult it creates in a community, and the family of the accused killer, needs to bleed and cry and scream. But “Defending Jacob” feels so removed from reality that it rarely allows itself an emotion that doesn't feel calculated by a production team. This needed to be the wailing grief of “Mystic River” or the vengeful horror of “Prisoners”—two projects about the death of children in suburbia—but it’s as if Tyldum and the writers were scared to get too honestly dark. It’s the kind of project that throws around phrases like “murder gene” and “cutter porn” like your uncle sharing a scary news story they found on Facebook, not in any way that reveals anything about the lie of the white picket fence of the nuclear family.

In all of this disappointing storytelling, there are moments from the cast that may carry viewers through. I’m really curious to see what Evans does post-MCU, and he proves he can handle mystery/drama here. Dockery is solid, but it’s really Evans’ show—Laurie feels more inconsistently like a device. As for supporters, Betty Gabriel and Cherry Jones are always welcome additions to any cast, and Pablo Schreiber is as consistent as they come, even if his part feels a little overwritten.

Mystery lovers will likely stick with “Defending Jacob,” which premieres with three episodes this Friday and then a new one every week to a total of eight, but it will quickly fade from memory. “Defending Jacob” should be a show about the impact of a murder investigation on parents who thought their lives were totally normal, but by keeping us in the dark, it feels more like a game, a cheap Lifetime mystery ... only four times as long.

Premieres with three episodes on Apple TV Plus today, 4/24. 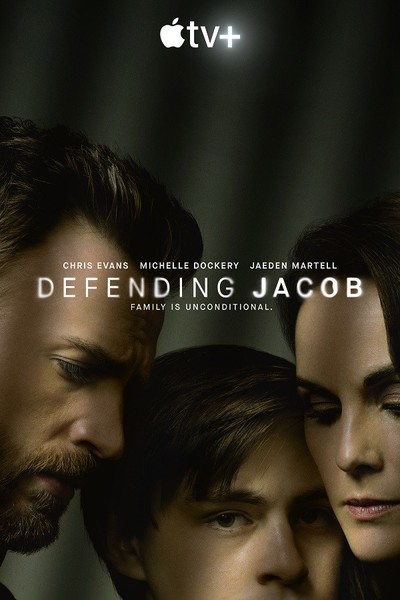