Park Chan-wook doesn’t make films that feel as traditional as the first hour of “Decision to Leave.” Anyone who knows that this is a movie from the director of “Oldboy” and “The Handmaiden” will be looking closely at the relatively straightforward thriller in front of them and trying to figure how it’s going to turn chaotic. The truth is that the first half of this film, despite its very strong craft, has a script that could have been a Bruce Willis erotic thriller in the 1990s with barely a rewrite. It’s another story of a good cop falling for one of his suspects and making the kind of mistakes that happen in thrillers when officers stop using logic. Of course, “Decision to Leave” does take a turn, although I wonder if it will be sharp enough for Park’s rabid fans. To this viewer, it develops into a pretty nifty piece of genre work, a thriller that’s expertly made even if it doesn’t quite hum like the best Park films. The fact that a good, well-made thriller feels almost like a disappointment given this creator’s pedigree is just a testament to the work he’s produced before.

Hae-jun (Park Hae-il) burns the candle at both ends as a Busan detective who has a “weekend marriage” with his wife in Ipo, meaning he’s only there when he’s not working cases. They seem happy enough but also have to keep discussing how they’re making this union work—never a good sign. That’s when Hae-jun meets Seo-rae (the excellent Tang Wei), the Chinese wife of a mountain climber who just fell from his favorite peak. Or did he?

Hae-jun’s partner immediately suspects Seo-rae; Hae-jun himself is quick to defend her. It was probably an accident or maybe even a suicide, right? This beguiling, elusive woman couldn’t be a murderer. And Hae-jun gets drawn into more than just the case as he surveils Seo-rae and becomes obsessed with her quirks. As he crosses the professional line to learn more about Hae-jun, he starts to make mistakes, and Park cleverly embeds focus issues into his story, whether it’s the morning fog of Ipo or the eye drops that Hae-jun has to use to clear up his blurred vision. He’s not seeing things right.

And then, of course, there’s a turn. It’s impossible to discuss the second half of “Decision to Leave” without spoilers so I won’t divulge details, but it echoes the first in increasingly fascinating ways. There’s another mystery that’s thrust into Hae-jun’s life and it forces him to rethink every decision he made in the first case and what matters to him now. Park plays with elements of not just noir but the old-fashioned romance movies that Seo-rae likes to watch. He basically sets these characters up, defining them in the first half, and then bounces them off each other in unexpected ways in the second half, ultimately leading to a rewarding thriller even if it lacks the sharp edges we’ve come to expect from Park.

Don’t get me wrong. This is not a mainstream, happy departure for Park Chan-wook. He’s still fascinated by the lengths, usually violent, that people will go to for emotionally irrational reasons. He really sets up Hae-jun as a rational creature so he can then unmoor him from his routines and see what happens. And he’s wonderfully playful here with the theme of communication—Seo-rae speaks Korean but sometimes has to use a translator app from her native Chinese, highlighting how these people aren’t really speaking to one another in a direct manner. I almost wanted more of this playful spirit, more of a sense that these are two people who become embroiled in a dangerous situation who can never really see each other through “The Mist,” which happens to be the name of Seo-rae’s favorite song.

Park is consistently juggling fascinating ideas in at least the back half of “Decision to Leave,” and he’s undeniably sharp in terms of craft, but he’s often, especially in the first half, restrained by the very familiar plot of the cop who tries to save the wrong suspect, a movie we have seen roughly 80 times. And even when he starts to unleash his storytelling, I feel like there’s a dirtier, less polished version of “Decision to Leave,” maybe one that Park would have made earlier in his career, that feels like more of a gut punch and less of a formal exercise. The latter is fun enough to recommend. The former is where great movies decide to stay.

This review was filed from the Toronto International Film Festival. It opens on October 14th. 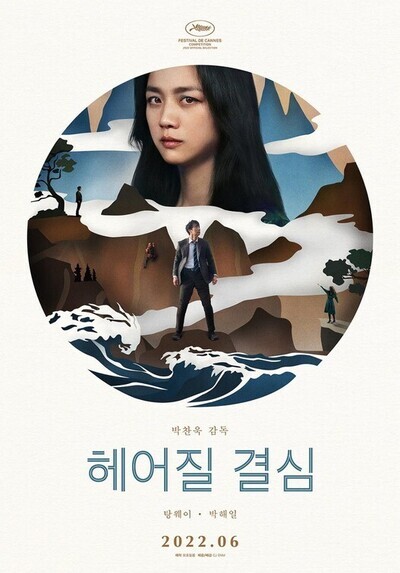