What if all those people who told you metal was the devil’s music were right? What if playing the right heavy tune could actually bring forth the end of the world? Such is the clever premise of Jason Lei Howden’s promising zom-rom-com debut “Deathgasm,” a film destined for midnight movie marathons. As is often the case with films that crib from the horror-comedy masters like Peter Jackson, the balance is tougher to pull off than it first appears, and “Deathgasm” gets a bit numbing and repetitive before it’s over, but there’s enough fun, clever material here for metalheads and horror fans to like until Sean Byrne’s superior “The Devil Candy” (a TIFF hit that also plays with that elusive dynamic between metal and Satan) lands sometime next year.

Brodie (the natural Milo Cawthorne) has just moved to a miserable new town, one in which he clearly doesn’t belong. Staying with his ultra-religious aunt and uncle, Brodie wears his metalhead status like a crown, refusing to give into bullies like his cousin or the perceived suburban norm. After a few false starts of friendship with other social misfits who have suffered similar bully abuse, Brodie finally thinks he’s found a soulmate in Zakk (James Blake) another guy who paints his face and rocks out. Brodie also notices the prettiest girl at school, the charming Medina (Kimberley Crossman), and falls hard, even though she’s dating his jock cousin. After being bullied one too many times and failing to win the heart of the blonde lass, Brodie plays a song with his new band, DEATHGASM (all caps, of course), and inadvertently brings forth a demon force known as The Blind One, instantly plunging their normal corner of the world into bloody chaos. Can the rockers survive the end of the world?

I do mean instantly. One of the more admirable elements of “Deathgasm” is how little time Howden wastes once the demonic viscera hits the fan. This is not a slow burn—it’s an orgy of crazy violence and impressive make-up effects. Before the guys know it, everyone around them has been possessed by something that looks like what Ash locked in the basement in “Evil Dead 2.” The summoning song is played and suddenly people are puking blood and faces are getting power-sanded. Through it all, Howden keeps an admirable, Jackson-esque levity in the film that works more often than it falters. Dialogue like, “It’s weird, but I think he would have wanted to go out like this,” after a particularly brutal death keep things from getting overly gross and repulsively gory for a while (I also particularly enjoyed a bad guy ordering someone be decapitated a second time to confused looks of his minions).

However, gorehounds need not worry that a movie called “Deathgasm” plays it safe. This is a defiantly, well, metal movie. From a possessed human being bludgeoned with a sex toy to a guy whose head and spine are literally ripped from his body, there are a number of opportunities for the film’s fanbase to give devil horns to the screen. At its best, it’s like a Megadeth album cover sprung to life. The only problems come, as they often do in films like this, in the pacing department. To be honest, it’s another trait shared with metal in that a lot of heavy albums get numbing and exhausting around the 2/3rds mark. That’s about when I was ready for “Deathgasm” to finish up its encore.

Howden’s debut is helped greatly by his cast, especially Cawthorne and Crossman, a cute couple who go well beyond “dork” and “popular girl” to ground their characters in ways that horror often misses. The director and his stars commit to the insanity of their project. They’re the kind of fans who don’t just go to a concert, they wear the t-shirt of the band playing that night, paint their faces, and trick out their car with paintings of devils and dragons. That commitment can be infectious—or at least admirable. 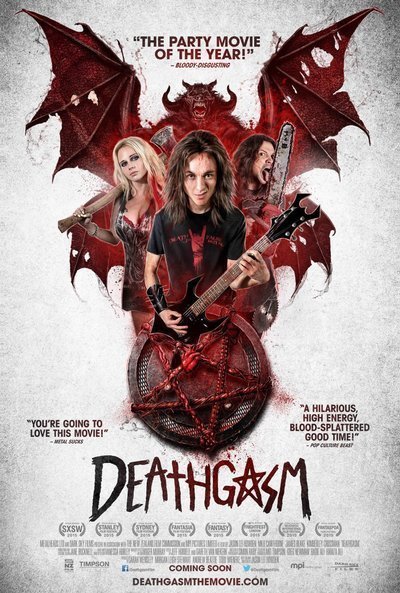