“Deadwood: The Movie,” a project that's been rumored and hoped for over the last decade, finally pulls into the station this Friday, May 31st, amidst revelations that creator David Milch is suffering from Alzheimer’s Disease. Even if one wasn’t aware of the tragic state of the film’s creator, there’s an unexpected poignancy in every frame of “Deadwood,” but the miracle of this production is how deftly Milch and company avoid emotional manipulation as they bring closure to an iconic TV show. Befitting one of the most complex television shows of all time, it's a rich 110 minutes of filmmaking that rewards fans without pandering to them. It is the product of someone who has been living with these characters since the show went off the air in 2006. You get the feeling that he knows everything that’s happened to them since then, and we drop in on their lives now as if they have gone on while we’ve been away. As much as fans have desperately wanted another season or movie before now, there's something so perfect and beautiful about how this movie came out that almost makes one feel like it couldn't have happened any other way.

It’s 1889, a decade after the action of season three of “Deadwood.” South Dakota is becoming a state, which means a visit to Deadwood by the villainous Senator George Hearst (Gerald McRaney), who rode off over the horizon at the end of season three after causing havoc and death. He is once again looking to expand his empire, trying to take land owned by Charlie Utter (Dayton Callie), and he’s particularly startled to find that his attacker Trixie (Paula Malcomson) is still breathing. (Her death was faked at the end of the series to satisfy his demand for justice.)

Meanwhile, we check in with most of the “Deadwood” familiar faces. Without too many spoilers, characters aren’t all that far from where we left them and yet there’s definitely a sense of time having passed as well. Milch is incredibly smart about how age doesn’t necessarily equate to wisdom, understanding, or drastic change. Time can mellow some antipathies, but it can harden others, and deepen emotions and resentments. When Alma Garret (Molly Parker) returns to Deadwood and crosses paths with Seth Bullock (Timothy Olyphant) there is both a sense of what they once had and that they’ve been happy apart. Both can be true. A vision of a content Bullock family—Anna Gunn returns as Martha and there are more children—and seeing a grown Sophia with Alma drives this home. And yet Milch drops in flashbacks to remind us of what these two once meant to each other, conveying how events can shape us but not always trap us. Seth and Alma moved on, but their relationship was formative. As were the events that transpired the last time that Hearst was in town.

Every single performer slides back into the characters that kickstarted their careers as if they never left. We have all seen long-delayed sequels or reboots in which the passage of time is barely alluded to and certainly not believable if it is. The three seasons of “Deadwood” gave us one of the most talented ensembles in TV history and it's striking how time has passed from the end of season three to now. Bullock seems more grounded, Sol & Trixie are about to have a baby, Cochran has the visage of someone who has seen a decade of drama, Joanie continues to struggle with her emotional demons—they are familiar and yet they bring the gravity of time with them, repeating old habits without feeling like they haven’t changed or aged at all in the last decade.

“Deadwood” was always a visually underrated show, but there’s a grace to the direction and cinematography to the film that feels denser and more poetic than the program. From the opening shot of a train emerging from a tunnel, the movie has an unexpected cinematic aesthetic. There are numerous scenes of bright sunlight across the faces of these characters. It’s almost as if Milch and director Daniel Minahan wanted to capture something magnificent about this small town before leaving it forever. Some of the best imagery in the entire arc of the show is right here in this movie.

All of this and we've barely mentioned Al Swearengen?!?! I’ll just say that Ian McShane’s show-stealing owner of the Gem Saloon does not get the arc fans might be expecting. The iconic anti-hero feels almost like a stand-in for Milch, as the movie opens with a dire diagnosis from Doc Cochran (Brad Dourif) that practically sidelines the prince of profanity. It’s interesting that Milch chose to turn his most outspoken and aggressive character into more of a supporting character in the film (which is not to say that McShane isn’t amazing here … he is), someone watching the action of the characters around him with a  stunning sense of finality. And yet “Deadwood: The Movie” is never the sentimental dirge it could easily have been. But don’t expect cock-eyed optimism either. Good men die. Bad men prosper. That’s life. What feels miraculous about "Deadwood: The Movie" is how much it captures the comfortable humanity in between those two extremes. It feels like the product of a creator who fully understands that this is his last creation, but even he refuses to end on an easy note. There can be closure without sentimentality. Sometimes we stop bleeding when we heal. And sometimes we stop bleeding when we die. 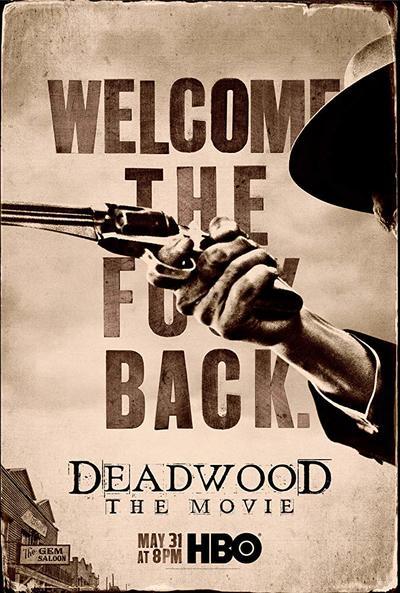