The Taiwanese drama “Days” is the sort of ethereal arthouse collage some critics will dismiss as a museum installation in movie drag. Believe me, I get it: “Days” doesn’t have a linear narrative or subtitled dialogue. Instead, it has a slow rhythm and a subdued aesthetic that only an arthouse devotee could love. To enjoy “Days,” you have commit to its earthy dream logic. It is an extraordinary movie; it is not an easy sit.

Also, while a lot happens in “Days,” the movie isn’t tense, nor does it feature a linear narrative to help us make sense of what we’re looking at. Most of the movie follows Kang (Kang-sheng Lee), an impassive loner, as he steeps in his overwhelming loneliness. Kang withdraws into his body and his immediate surroundings, and is slowly diminished (or maybe transformed) in time. That’s it, that’s the movie.

We watch as Kang haunts non-descript urban interiors, which are mostly characterized by harsh artificial lighting, glassy surfaces, impenetrable shadows, and the city’s usual rude, but reassuring ambient noise. Kang seems to be on a self-care kick: he enjoys a luxurious bath, some acupuncture, and plenty of time spacing out, unmoored from any professional responsibilities (could this be a vacation?). And for a moment, Kang develops an unexpected bond with Non (Anong Houngheuangsy), a masseur. Kang and Non’s moment lasts longer, and is therefore maybe more uncomfortable, than some viewers will be used to.

Writer/director Ming-liang Tsai (“What Time Is It There?,” “Goodbye, Dragon Inn”) tends to prefer mood over plot. He also likes to super-impose ghost-like images on Lee’s body, or to partly obscure our view of his environment. So when Kang soaks in an open-air bath, the clear water that covers his body also reflects a pocket of light just over his right hip (maybe from a skylight?). And when Kang undergoes an acupuncture treatment, Lee’s back is covered with needles, and a messy patchwork of tin sheets and cardboard strips. Kang’s acupuncturist tops up his needles with a well-used, industrial-length lighter (it almost looks like a Dust Devil); some ashes crumble onto Lee’s back. But Kang’s acupuncturist doesn’t seem to notice or care, and Lee’s body remains still. Some of the needles on his back ignite and smolder.

Many of the spaces that Kang occupies are not conventionally handsome. They’re dark and confining, and often look like they’ve been abandoned, or left to rot. Mildew stains fleck the walls, and rainwater gets into everything. Iron bars and metal grates cover everything, and light either bounces or pushes us to the corners of open doorways, cracked window panes, and narrow corridors. These images don't transcend their shabby nature, but we still develop affection for their moldering, tacky, liminal surfaces. We adapt to what we’re looking at, and maybe even come to anticipate the harsh clatter of closing doors, or the shuffle of flip-flops on cheap-looking tiles. The sigh of an old car’s brakes, and the angry rumble of its engine.

And in the midst of these overwhelming, isolated images and sounds, Kang and Non meet in a hotel room, where Kang undresses, and receives a massage. Non’s touch is methodical and repetitive, but still erotic: he rubs Kang between his thighs, and kneads his buttocks. Lee sighs with relief. Later on, Kang gives a music box to Non. They listen to it together, and at some length. The effect of this scene, which is presented in a typically static, uninterrupted take, is as mysterious as the scene is long. And as this delicate moment plays out, we watch Kang and Non sit together and struggle to make time stop.

The emotional weight of these half-alienating, half-enchanting moments can be pretty devastating, but only if you submit to Tsai’s generous rhythm and style. “Days” is not exactly a chilly movie, but it also isn’t an obviously warm one either. Sometimes, Tsai’s movie feels like a literal-minded, but intoxicatingly detailed translation of his dreams. And as we drift through the labyrinthine corridors of his subconscious, we’re encouraged to pore over a collection of sensory details that suggest a lot, but don’t necessarily announce their meaning.

You have to sit with “Days,” and let it reveal itself in its own time, like the angry purple bruise that appears on Lee’s left shoulder when Kang receives a typically methodical back massage. That sort of image requires an open mind, and some devotion, to be beautiful. And “Days” is beautiful; it radiates the sort of low-key intensity and punch-drunk wooziness that can become intoxicating, if you pay close enough attention. See it however and wherever you can, preferably with some strangers and with all the lights out. 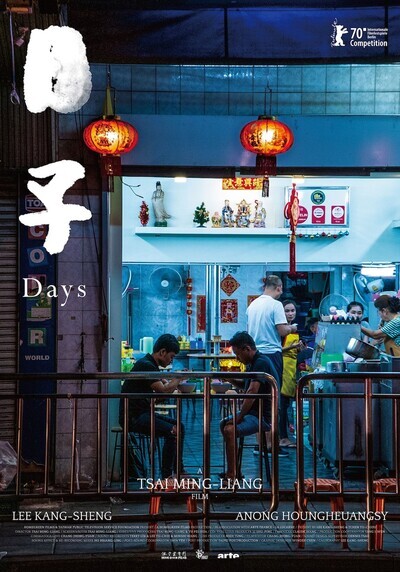