Dollar theaters were venues where people could see movies for just a few bucks in their "second run," after their initial buzz petered out and first-run theaters kicked them out to book something new. The prints were often beat-up, and sometimes the sound was warped from the film being played over an over in first-run houses. It didn't matter, because admission was cheap and the movie was only part of the reason for buying a ticket. Dollar theaters thrived until well into the nineties, when video rental stores started getting new releases in a matter of weeks rather than months. But until that point, they were havens for lower-budget genre films, particularly R-rated fare: outrageous horror and science fiction pictures, action movies, smutty teen comedies, erotic thrillers, and so on.

This little film exhibition history lesson is by way of letting you know that the straight-to-Netflix horror comedy "Day Shift" is a film out of its correct time period. When people say that a film is "made for theaters" they often mean that it's opulent, expensive, and long. But this movie belongs in a different kind of theater. Its flaws would recede in a packed house full of paying customers who sat down buzzed on their intoxicant of choice, eager to watch something that pushed their buttons. This is a movie that you talk back to, in excitement, fright, or amusement, or because it did something corny or dumb and you can feel that everyone around you recognizes it, too.

Jamie Foxx stars as Bud Jablonski, a working class Los Angeles pool cleaner who hunts down vampires to sell their teeth for cash. Snoop Dogg is Bud’s mentor Big John Elliott, a legend who used to be in the vampire hunter's union with Bud until the latter got kicked out for breaking too many rules and incurring too many disciplinary actions. (Kudos to the Van Helsings of Los Angeles for unionizing; hope they have a good medical plan, because they get knocked around a lot.) Bud is a struggling divorced father whose wife Jocelyn (Meagan Good) still loves him but just can't live with him because he's never around and keeps too many secrets from her. The first part of the movie is about Bud ramping up his vampire hunting to accumulate and sell more teeth so that he can make $10,000 in less than a week, give it to Jocelyn to catch up on the mortgage, pay private school tuition for their adorable daughter Paige (Zion Broadnax), and eliminate the financial necessity of Jocelyn selling the house, moving away, and taking Paige with her.

Elsewhere in the City of Angels, beyond the awareness of Bud and his workaday money troubles, a conspiracy is brewing. Audrey San Fernando (Karla Souza) is a Mexican-American vampire who's several centuries old but looks fabulous in the impeccably tailored power suits that she wears in her capacity as the owner and public face of a rapidly growing real estate empire. ("Day Shift" isn't big on satire or subtext and doesn't seem to want to be, but making the film's most fearsome bloodsucker a real estate developer is a pretty good joke.) Audrey is buying up homes in the Jablonskis' neighborhood to gentrify the place for bloodsuckers and create a homeland for them. She fixates on Bud because he killed an old lady vampire in the film's protracted opening fight sequence and extracted her teeth.

"Day Shift" is a movie in the vein (har har) of "R.I.P.D.," "Shaun of the Dead" and their early dollar theater progenitors: exuberantly goofy programmers like "Fright Night," "The Kiss," and "Return of the Living Dead." These kinds of movies are silly and trashy by nature, deal in familiar tropes/cliches, have a fair share of placeholder dialogue, and never make a move without keeping one eye on the audience's reaction, and they tend to vary in quality from brilliant and fun to awful but not without charm. This one falls somewhere in the middle of that spectrum, but there's no denying that it's made with skill. Everyone in this cast does their best to strike the right balance between seeming in on the joke and acting like all of this bloody absurdity is normal.

The first half of "Day Shift" will seem tediously familiar if you've seen the sorts of movies that it's modeling itself after—gore gag, joke, gore gag, joke, half-assed banter, shootout, etc. But first-time feature filmmaker J.J. Perry, a martial artist and former stuntman and stunt coordinator, keeps things chugging along, staging the mayhem with flair and humor, variously channeling "The Exorcist," Sam Raimi's "Evil Dead" films, and 1980s Hong Kong kung fu pictures, and setting up every battle in terms of escalating stakes and plans going awry. There are a few images in the film you can genuinely say you've never seen before, such as a drone shot that begins inside of a sports car, flies through an open sunroof, and rises over the road to take in a line of cars and bikes in a high-speed chase. The movie gets much more assured in the second half, when Bud and Audrey's stories begin to intertwine, and it finds the right balance of goofy deadpan comedy, martial arts-inflected supernatural brawls, gunplay, car chases, and gore.

It seems counterintuitive to say this way, but even though all of the characters in “Day Shift” fill predictable roles (stalwart hero, grizzled mentor, fretful wife, innocent daughter, etc.), each one of them is an individual, and the performers have fun playing them. Foxx is great at everything he does, and he makes a superb Schwarzenegger-like droll action figure here. The performance is reminiscent of Arnie in "Raw Deal," where he's the slightly befuddled straight man most of the time even though he's a badass who can kill ten enemies before they can draw their guns from their holsters. Dave Franco is a standout as Seth, an inexperienced, easily rattled young vampire hunter who approaches his job with unearned arrogance and ends up going through a more complicated, funny, oddly touching personal journey than he or the audience could’ve expected. Snoop plays, essentially, Kris Kristofferson in the "Blade" films, Compton version. His comic pitch is impeccable, and with his skinny frame and six-foot-four height, he looks magnificent in a ten-gallon hat and leather vests and dusters, like an animated cartoon version of an Old West gunfighter.

Aside from a handful of twists in the final act, there's nothing in "Day Shift" that you can't see coming long before it shows up onscreen, and the more potentially emotional aspects of the story are treated as glancingly/jokingly as everything else. (You'll know what's being referred to when you watch the film; it's the kind of parallel-constructed, "We're not that different, you and I" plot element that a director like Guillermo del Toro would milk for melodrama.) If you imagine a raucous Friday night crowd reacting to everything that happens, the movie seems better than it is. Maybe Netflix should add one more audio track to offerings like this: Dollar Theater Audience. 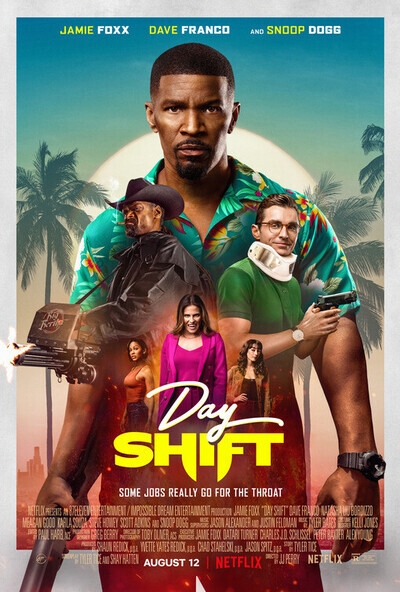 Rated R for strong violence and gore, and language.