Gillian Flynn’s script for David Fincher’s incredible adaptation of “Gone Girl” was a master class in genre, taking an admittedly ridiculous, twisting and turning narrative and making its plot holes forgivable through sheer force of entertainment value. It makes sense that another of Flynn’s novels, the sinister “Dark Places,” would get the cinematic treatment as well, although this failed exercise could be used comparatively with “Gone Girl” as a What Not to Do cinematic lesson. Whereas Fincher and Flynn brought style and flair to the saga of Amazing Amy, writer/director Gilles Paquet-Brenner presents a drab, dull, uninspired affair, enlivened only slightly by the talented cast assembled. Failing to find a visual language for the piece that reaches beyond a Lifetime TV Movie and adapting the material in such a way that makes her protagonist largely inactive in her own story, Paquet-Brenner only makes the already-underrated “Gone Girl” look even more accomplished.

When she was only seven, Libby Day (Sterling Jerins) suffered the unimaginable. Her entire family was murdered in a shotgun rampage like something out of “In Cold Blood.” In fact, the murders earned that kind of international attention, especially after Libby’s brother Ben (Tye Sheridan) was arrested and sentenced for them. Accused of dabbling in Satanism, Ben was convicted on little evidence, and true crime nuts have been convinced for years that there was more to the Day murders. Of course, there was, because, well, there’s no movie otherwise.

Bitter and hardened by life, grown Libby (Charlize Theron) hasn’t been in touch with her incarcerated brother (played by Corey Stoll older) since the crimes. That’s when she’s contacted by Lyle Wirth (Nicholas Hoult), a member of a true crime club that collects items and information from bloodbaths around the country. He convinces the broke Libby to tell her story to the club, and she needs the cash enough to do so. Of course, Lyle has ulterior motives, convinced that Ben is innocent, and he eventually talks Libby into digging deeper into what really happened that night.

Both narratives—the current-day investigation and the days leading up to the murder years earlier—are intercut in this murky, unrefined screenplay that piles up narrative and twists without ever considering the piece’s deadly lack of characters. Theron does her brooding best to make Libby three-dimensional, but, and this could be partly the fault of the source material, she is almost always merely a listener to someone presenting more details about her past or entirely absent in the extensive flashbacks. Consequently, “Dark Places” is a film without a protagonist, akin to watching recreated footage on “Dateline NBC,” as each flashback or revelatory conversation fills in a few more details of the overheated story without giving us a reason to care about it in the first place. Poor Theron wanders through a narrative designed around reveals; so she’s either remembering things she couldn’t have possibly known about or hearing about things she should have figured out a long time ago. As he often has lately, Corey Stoll actually makes out the best in a few crucial scenes as the older Ben, and Hoult certainly isn’t bad even if his character, like so many of them, feels like a plot device.

All of this leads to a distinct lack of urgency in “Dark Places,” which makes the dour, depressing subject matter that much harder to enjoy. It's a checklist of awful things that can happen to a Middle American family. The Day matriarch (Christina Hendricks) is afraid of losing the farm, their dad (a suspect in the murders) is missing, Satanism threatens to entice young Ben, the kid is accused of child abuse, drugs, teenage pregnancy—the whole thing verges on poverty porn given the lack of genre escapism provided. We needed a reason to wallow in the dark places of Libby Day’s horrible life to make the cinematic journey worthwhile. No one involved in the production of “Dark Places” ever asked a crucial question: Why should we care? 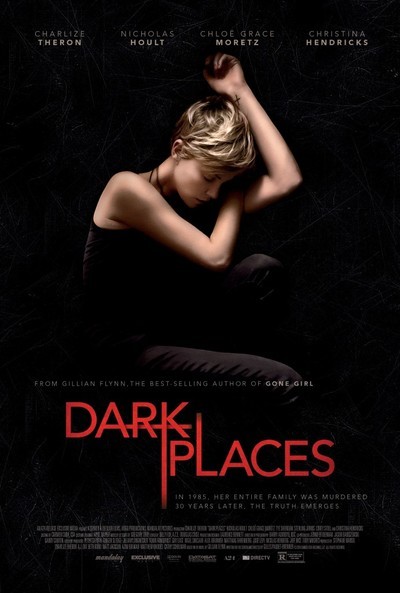 Rated R for some disturbing violence, language, drug use and sexual content