“You’re always sorry and there’s always a speech. But nobody cares anymore.”

It’s rare for a character to speak dialogue that so perfectly captures the critically flawed foundation of a film as completely as that particular line from “Dark Phoenix,” the last gasp of a franchise that has had remarkable highs and remarkable lows but never quite seen a film that felt so much like nobody cared anymore. Allegedly conceived as a send-off to the characters and cast introduced over the course of “X-Men: First Class,” “X-Men: Days of Future Past,” and “X-Men: Apocalypse,” Simon Kinberg’s directorial debut simply has nothing going on under the surface, and that's pretty bland too. It is a joyless, lifeless, boring affair that repeats ideas from better X-films and feels more like an obligatory reunion cash grab than a deeply considered goodbye to iconic characters.

When Jean Grey was a child, her parents died in a car accident after their daughter’s psychic powers manifested in a way that put mom to sleep behind the wheel. Professor Charles Xavier (James McAvoy) took in the orphaned girl, knowing that he could raise her in a way that controlled her powers, and she became a part of the X-Men, played when she’s older by Sophie Turner. In an early scene in “Dark Phoenix,” the X-Men are sent on a mission to save a crew of a space shuttle that is spinning out of control. Jean Grey, Professor X, Raven (Jennifer Lawrence), Beast (Nicholas Hoult), Cyclops (Tye Sheridan), Quicksilver (Evan Peters), Storm (Alexandra Shipp), and Nightcrawler (Kodi Smit-McPhee) spring into action. What follows is actually the best sequence in the movie as the X-Men combine their powers to save the crew, giving each a brief moment to shine. Jean ends up taking the brunt of what is though to be a solar flare at first but ends up being some sort of interstellar, planet-destroying force. And that force now lives inside Jean.

Renamed the Phoenix by some for the way she cheated death, Jean now has unusual powers that she struggles to control. She’s also flooded by memories of her past that Professor X helped repress, and the combination of her new rage abilities and a sense of betrayal by her father figure leads Phoenix to the dark side. It doesn’t help that an alien being named Vuk (who takes the body of Jessica Chastain) is encouraging Phoenix to go all space-mental, or that our heroine ends up killing someone she once loved. All of this brings Magneto (Michael Fassbender) back into the fold, and a whole lot of things go boom and bam. If you’re even remotely turned off by the trend of blockbusters climaxes that exist almost solely to present CGI versions of things smashing into each other, stay far from “Dark Phoenix.”

Actually, there are plenty of other reasons to stay away from “Dark Phoenix” too. The best “X-Men” movies contain a degree of subtext (often about outsiders), but “Dark Phoenix” is all flat text. Everyone says what they mean, feel, and need at all times, leading to dialogue that gets so repetitive that it becomes numbing for the LONG stretches between poorly-directed action sequences (there's one in which X-Men fight trying to cross a street that is comically bad in terms of choreography). People say generic Comic Book Movie Mad-Libs things like “When I lose control things happen ... bad things ... to people I love,” and you start to pray for Magneto/Fassbender to say something remotely witty or, gasp, whimsical. The truth is that Wolverine/Jackman added some playful energy to the other films, and it’s stunning that no one thought that maybe someone else should take on that role here.

It's probably because everyone was too bored to care. Jennifer Lawrence is a wonderful actress in the right material, but she simply can’t be convinced to feign excitement about playing this part one more contractually-mandated time. Jessica Chastain can usually bring depth and nuance to everything she does, but she gets lost in a non-character here. McAvoy and Fassbender have glimpses of the life they once injected in these characters but to contrast these performances to their work in “First Class” and “Days of Future Past” is like seeing an athlete at the beginning and end of their career. The heart’s just not there. And I don’t believe in being mean to young performers, so I’ll just say that Ms. Turner has not been directed here in such a way that convinces me that she can carry a movie. Her take on Grey/Phoenix is so far from what made the character interesting in the comic books that they aren’t really the same at all. One of the key problems with “Dark Phoenix” on a core level is that it’s ostensibly about a woman whose emotions turn dangerous but Turner doesn’t convey a single human one that feels relatable at all. She’s more like an android who has gone haywire than a human or even mutant lost control of her powers. Jean Grey's turn to the dark side needs to be about powerful, relatable, passionate emotion. Here it's just about an actress covered in CGI swirls.

Everyone seems to agree that this X-venture is the last cinematic one for a long time. Fox is being rolled into the Marvel empire and we probably won’t see Professor X, Magneto, or even Wolverine for years. By then, everyone will have forgotten “Dark Phoenix.” Heck, that will happen by the end of the month. After all, nobody cares anymore. 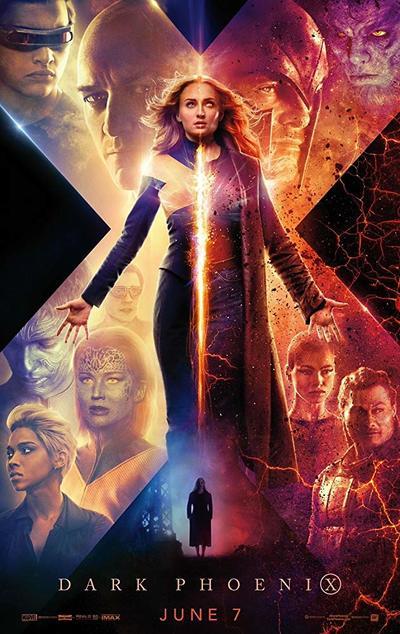 Rated PG-13 for intense sequences of sci-fi violence and action including some gunplay, disturbing images, and brief strong language.