To give credit where it's arguably due, "Dallas Buyers Club," directed by Jean-Marc Vallée from a screenplay by Craig Borten and Melisa Wallack, takes a different storytelling tack than might be expected of an aspiring-to-inspire based-on-a-true-story drama. Beginning in the mid-1980s, a period cited by journalists and historians as the height of the AIDS crisis in the United States, "Club" is about Ron Woodroof, a real-life figure. Woodroof was a hard-partying, ever-on-the-make quasi-cowboy who, on finding himself HIV-infected and with a very-soon-to-come death sentence hanging over him, began aggressively exploring alternative meds. He unwittingly became an advocate and activist, even as he kept himself alive for years longer than any medical experts had told him he could.

Woodroof was also, this story tells us, a bigoted redneck who bristled with more than just fear of mortality when he got his diagnosis. "Dallas Buyers Club" is not just about Woodroof going up against the FDA and Big Pharma and the other institutions and individuals who kept potentially life-saving drugs from sick people who needed them; it is of course also about Woodroof's Growth As A Human Being, and how this growth allows him to work side by side with a flamboyant transsexual, a person he not only wouldn't have given the time of day to in his prior mode of life, but possibly would have given a beatdown to.

But while it highlights performances by both Matthew McConaughey (as Woodroof) and Jared Leto (as the wily, poignant transsexual Rayon) that are models of both emotional and physical commitment (both actors shed alarming amounts of weight to portray the ravages the disease wreaks on their characters), "Dallas Buyers Club" largely goes out of its way to eschew button-pushing and tear-jerking. Shot mostly in a direct, near-documentary style, but edited with a keen feel for the subjectivity of its main characters, "Dallas Buyers Club" takes a more elliptical, near-poetic approach to the lives it portrays than the viewer might expect from this kind of movie.

As I mentioned at the start of the review, the approach is admirable in theory. In practice, though, it's sometimes mildly frustrating. The struggles of people suffering from AIDS in America were epic, and involved a Physician's Desk Reference worth of meds, and a near-army of regulations and regulatory agencies; that's a lot of data for one two-hour drama, and McConaughey's character has to act as both an audience surrogate and a hero, but he's also a man struggling with potent demons. Vallée's energetic direction keeps the narrative moving, and there's a real rush when Woodroof's hustling pays off with the creation of the movie's title entity, a sort of medical co-op that gets non-approved meds into the hands of the sick people the health care system can't or won't help.

The moment-to-moment approach gets choppy sometimes, as when Woodroof is suddenly portrayed in a slick international-drug-smuggler mode; one gets the impression of being in a different movie. Vallée also misjudges, I think, the scenes in which to lay on the portent, as the scene in which Woodroof muddles through his past to figure out how he got infected, and flashes back to a rather overly boogity-boogity scene in which Woodroof has aggressively unprotected sex with two women, one of whom is a junkie. On the other end of a particular spectrum, the movie's potential nod to sentiment, in the form of a potential romance between Woodroof and one of the few helpful/compassionate physicians he encounters (Jennifer Garner, who does good, understated work), seems a little half-hearted.

I understand these sound like quibbles, but I'm trying to come to terms with why "Dallas Buyers Club" is a somewhat more dry experience than I suspect it wants to be. The movie certainly does crackle courtesy of McConaughey. Even as his character is physically wasting away, the actor is unfailing in his portrayal of Woodroof's never-say-die indomitability, and is also unimpeachable in conveying the dangerous sleazoid charm that's a carryover from Woodroof's former footloose existence.

While Jared Leto's Rayon is often used as Woodroof's foil, Leto's attentive, detail-oriented portrayal of the fragile but supremely street-smart Buyers Club partner gives the character a distinct autonomy. The cast is packed with great actors (Steve Zahn, Dallas Roberts, Griffin Dunne and Denis O'Hare among then) buckling down, and that's key to the movie's pleasures. If "Dallas Buyers Club" falls somewhat short in the categories of historical chronicle, emotional wallop, and information delivery, its conscientious attempts to portray a group of people in trouble in a troubled time delivers mini-epiphanies in a series of small doses. And that isn't nothing. 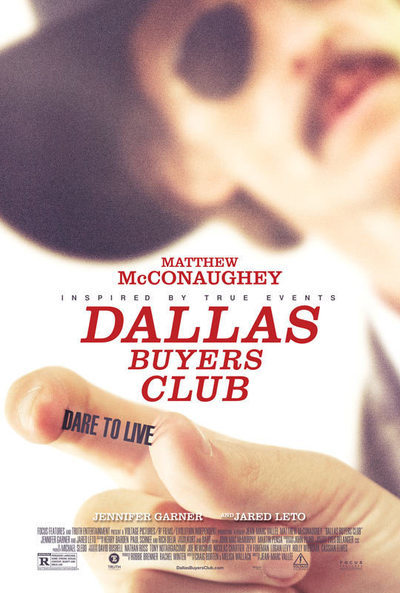