At one point in "Cymbeline," Michael Almereyda's modern-day take on the William Shakespeare play, the action stops for a minute for a scene featuring co-star Milla Jovovich singing Bob Dylan's "Dark Eyes." Speaking as an enormous fan of both of them, I thought this union of two favorites in the pop-culture firmament would be worth the price of admission all by itself. Alas, it is not because most of the rest of the film surrounding it is a conceptually weak and dramatically muddled mess that has acquired a game and good cast and then given them precious little to do.

To be fair, the basic material itself is not especially hot. Yes, it is Shakespeare but the play itself is little more than a rehash of elements that he has already handled with more insight in previous works ("Romeo & Juliet," "Othello," "Hamlet" and "As You Like It," to name a few) and is so plot-heavy that the characters feel more like traffic cops trying to move the story along than people about whom one is supposed to care. Many scholars have cited it as proof that Shakespeare was getting bored with his own work by this point in his career, though some, such as Harold Bloom, have looked upon it a little more forgivingly by suggesting that it was an example of Shakespeare deliberately spoofing himself. Whichever school of thought you subscribe to, this is not one of the Bard's more frequently revived efforts and after watching this take on it, I can understand why.

The action transposed to a modern-day American East Coast city, the film stars Ed Harris as Cymbeline, the king of the Briton Motorcycle Gang, a group that has forged an uneasy truce with the Roman police force that allows them to do business without interference. The apple of his eye is his daughter, Imogen (Dakota Johnson), his only remaining child after the disappearance of his two sons and the heir to his kingdom. He is insistent that she marry Cloten (Anton Yelchin), the son of his second wife, the Queen (Jovovich), but as the story opens, he learns that Imogen has defied him by falling in love (and secretly marrying) the penniless-but-true Posthumus (Penn Badgley). Cymbeline is outraged by this and sends Posthumus into exile. The Queen is no happier either by this revelation as she is the one behind the plan for Imogen to marry Cloten, so that she may then kill both Cymbeline and Imogen and make her son the king.

While the truce between the Britons and Romans falls apart and leads to bloodshed on both sides, Posthumus finds himself forced into a wager with the Iachimo (Ethan Hawke), an agitator who bets him that he can seduce Imogen and provide proof of the deed. Imogen manages to fend off his advances, but late one night, Iachimo fakes the evidence and the distraught Posthumus orders aide Pisanio (John Leguizamo) to murder Imogen in revenge for her unfaithfulness. Pisanio cannot bring himself to do this and instead advises Imogen to disguise herself as a man and go into hiding, which leads her to the doorstep of an old man (Delroy Lindo) and his two sons. This all leads to the usual array of Shakespearian plot twists--suicide, murder, war and magical potions that make people seem dead just long enough to cause a potentially grave misunderstanding or two.

This is Almereyda's second cinematic stab at modern-day Shakespeare, the first being his acclaimed 2000 take on "Hamlet." Like that film, "Cymbeline" more or less preserves the text but updates everything else--guns replace knives, motorcycles replace horses, directions to a faraway land are located using Google and Iachimo offers proof of Imogen's unfaithfulness through a seemingly incriminating selfie. However, his "Hamlet," though not without its flaws, was a conceptually intriguing take on the material that found ingenious modern equivalents for the textual elements (such as setting Hamlet's famous soliloquy of indecision while perusing the Action aisle of the local video store) and came up with some nifty casting ideas to boot--whoever thought of casting Bill Murray as Polonius deserves some kind of medal as far as I am concerned.

By comparison, "Cymbeline" is weird but in all of the wrong ways. For one thing, the idea of setting the action within the ranks of a motorcycle gang is a relentlessly terrible idea for any number of reasons--there is no real sense of conflict, either within Cymbeline's ranks or with the Roman police, the notion of a man living like suburban royalty as the result of leading a bike gang is hugely implausible and even if the other stuff worked, the concept would still invite too many comparisons to "Sons of Anarchy," another drama about motorcycle gangs that had plenty of its own Shakespearian undertones to boot. (At one point, the film itself was set to be released under the title "Anarchy" before saner heads prevailed and it returned to its original name.) For another, the focus on the test of Imogen's fidelity just does not make any sense in this revised context and makes Posthumus seem silly rather than tragic. The finale is also pretty much a train wreck; there are so many plot threads waiting to be resolved that you can practically see them in holding patterns waiting for their chance to touch down.

The casting for "Cymbeline" is also all over the place. The more experienced actors, such as Harris, Hawke (who starred in Almereyda's "Hamlet") and Jovovich handle the text well but are hampered by flaws in the script. Harris' character is hard to believe, Hawke gets stuck with the dumbest aspect of the plot and Jovovich disappears for huge chunks of the story. Meanwhile, the younger players struggle to find a hold on the material and their characters. Badgley's Posthumus comes across as more of a dweeb than anything else, Yelchin's Cloten is just plain irritating and Dakota Johnson is as wooden here as Imogen as she was in "Fifty Shades of Grey," though she happily takes far less abuse this time around, save for one inadvertent punch to the face.

Michael Almereyda is an interesting and ambitious filmmaker (his 1994 vampire film "Nadja" is one of the better contemporary riffs on the genre) who doesn't work as often as he should. Therefore, it is doubly depressing that "Cymbeline" never quite catches fire, either as a film or as a conceptual experiment. In writing about the original play, Samuel Johnson once said "To remark the folly of the fiction, the absurdity of the conduct, the confusion of the names and manners of different times, and the impossibility of the events in any system of life, were to waste criticism upon unresisting imbecility, upon faults too evident for detection, and too gross for aggravation." Imagine what he would have thought if he had seen smartphones. 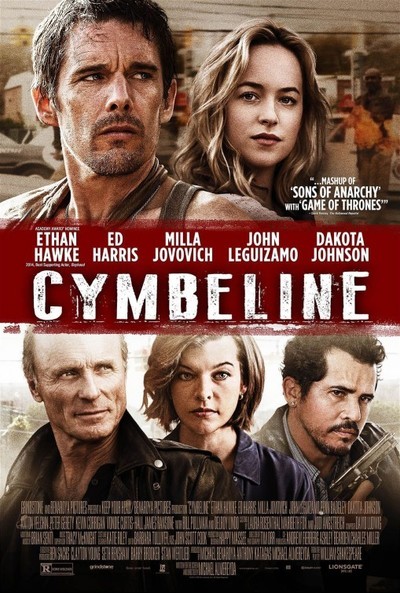