"Criminal Activities" kicks off like any good "Pulp Fiction"-inspired drama should: at a funeral, and then a diner. Four college buddies meet up for grub after they bury their friend Matthew. They run into Noah ("The Guest" star Dan Stevens), an awkward acquaintance that they used to bully back in school. The group—led by swinging-dick alpha male Zach (a very bored Michael Pitt)—embraces Noah after he offers to bank-roll a sure-fire stock tip. But when the group immediately loses their money, they find themselves in debt to eccentric (i.e.: kale-shake-drinking health nut) gangster Eddie (a heavily made-up and elaborately coiffed John Travolta). Eddie makes them a deal they can't refuse, and Zach's crew winds up kidnapping two-bit thug Marques (Edi Gathegi) for Eddie. Naturally, Marques is not who he appears to be, and the boys' scheme goes sour faster than you can say, "Wasn't that Travolta guy in 'Pulp Fiction?'"

Everything else that should happen slowly, and meticulously, feels similarly sped up. Haley has no patience, and doesn't linger on any of his actors' faces when they hold court and tell each other long-winded stories that often go nowhere. There's also no joy in scenes of violence, like when Gerry (Haley), Eddie's right-hand man, dangles a low-level crook over a multi-story building, and the terrified crook winds up falling to his death because of a little screw-up. The build-up to this shockingly abrupt death is negligible, as is the deadpan response that Gerry's men give.

There's similarly nothing pleasurable about the scene where Gerry recalls a childhood incident when a stray bullet inadvertently saved his left ear from being cut off. That scene should be a slow build-up to a shocking random murder. Instead, it feels like a jerky, smug story punctuated by crass, lazy jokes—Gerry's savior was originally trying to kill a stranger that he catches having sex with his obese, hysterical mother—that ends with an equally anti-climactic finale. These scenes are too unimaginative to be stylish, though they try very hard to impress viewers with many plot twists, shocking violence, and ostentatious Proust quotes (seriously, this movie's first line of dialogue is from Proust).

Then there's the matter of John Travolta. Travolta's recent performances have had their moments of campy zeal, particularly his over-the-top turns in "Savages" and "From Paris with Love." He's similarly fun to watch in "Criminal Activities," even if he's stuck playing a guy whose quotation and interpretation of "Macbeth" makes him sound like that one over-eager kid who always raised their hand in your college Film Theory class, but somehow never had the right answers. But there's the rub: why settle for kinda-crazy Travolta when you can enjoy uninhibited, old-man-character-actor Travolta in other films? In "Criminal Activities," you can't even get off on watching Travolta beat a guy with a tire iron because Haley doesn't know where to put his camera. Perhaps later, Haley will look back on scenes where he overlooked Travolta's goldmine of quirks and facial tics on poor-blocked speeches, and hopefully laugh. But in the meantime, the man needs to spend a few more hours watching Tarantino films. 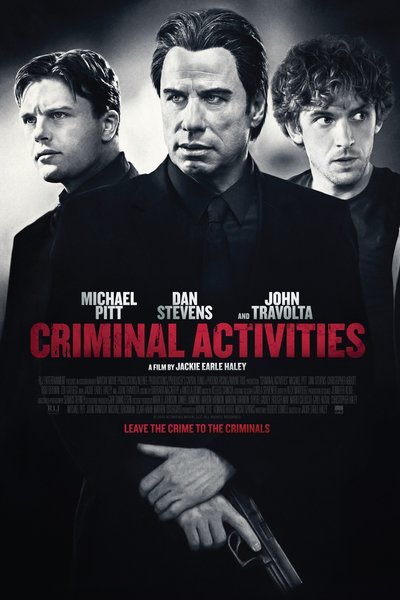