Much like the case it profiles, Netflix’s “Crime Scene: Vanishing at the Cecil Hotel” is not what it first appears. It’s better. The first episode of this four-hour docuseries from the great Joe Berlinger (“Paradise Lost”) sets up a story of a cursed location, a famous Los Angeles hotel that has been the scene of so many crimes that Ryan Murphy basically set an installment of “American Horror Story” there in the "Hotel" year. But the series then pivots to focus very tightly on one specific case, the fascinating disappearance of a Canadian traveler named Elisa Lam. In 2013, the 21-year-old Lam traveled from Vancouver down the coast, ending up at the Cecil Hotel in Los Angeles early that year. As of January 31st, she disappeared, and her case became an obsession for thousands of people online, trying to figure where she could have gone. Everything was greatly amplified by an elevator security video that would be the last footage of Lam alive. In it, she appears to be acting very unusually, pushing all of the buttons, making wild hand movements, and possibly talking to someone in the hall outside the elevator, which, inexplicably, doesn’t close. She leaves the elevator. Her body was found in the hotel’s water tank almost three weeks later.

What happened to Elisa Lam? As Berlinger captures in “Crime Scene,” that was a question that obsessed true crime fans around the world, who analyzed that camera footage more than the Zapruder film. Did it look to anyone else like there might be a foot in the hall, indicating another person? Why didn’t the doors close? What’s up with the weird timestamp that suggests possible manipulation by the hotel? Are they covering something up? Is it possible that the rumors of the Cecil Hotel being haunted are true? Or did Lam run into the wrong person that night, something that had happened to a number of people over the years at a location with a history of violence?

Berlinger and his team unpack all of these conspiracy theories, eventually ending up at what feels like the truth about Lam’s death, but they are more curious about how the history of the Cecil and the dissemination of the security video amplified the conversation around this case. Elisa Lam goes missing at a Marriott somewhere else in the country and there’s no truly haunting camera footage? It’s a tragedy but not one that’s getting a four-hour Netflix series. There’s something uniquely captivating about how this case unfolded, particularly in the way that all of the conspiracy theories arguably obscured the truth and tragedy more than clarified it. There are cases of internet sleuths aiding investigations, but there are also cases of true crime obsessives taking their out-there ideas down the rabbit hole of message boards. This seems like one of the latter, making “Crime Scene” an interesting story not of a crime itself but all the issues around it.

There are times when “Crime Scene” leans too much into that mindset of salacious true crime obsessives, but I believe it’s for the greater good in the end, illustrating how many of the conspiracy theories around Elisa Lam were misguided at best. The Cecil Hotel is a crime landmark, a place that Elizabeth Short (The Black Dahlia) may have been not long before she was murdered and a place that Richard Ramirez (The Night Stalker) is confirmed to have stayed. Berlinger interviews the former manager of the Cecil, who is candid about the history of the location that feels almost like a web in which Lam got stuck, and Berlinger even places it in the context of the city, noting its proximity to the notorious Skid Row.

“Crime Scene” does suffer from the modern Netflix true crime problem in that there’s a tighter, better version that runs the length of a feature film. Some of the reenactments of internet investigators staring at computer screens feel silly, and it’s a bit sad that the series doesn’t really get to know Lam, not interviewing anyone who actually knew her. Although I would argue that’s by design. It’s the story of someone that hundreds of people spent their days and nights trying to find, and then trying to bring justice to after her body was found, but none of them really knew her. 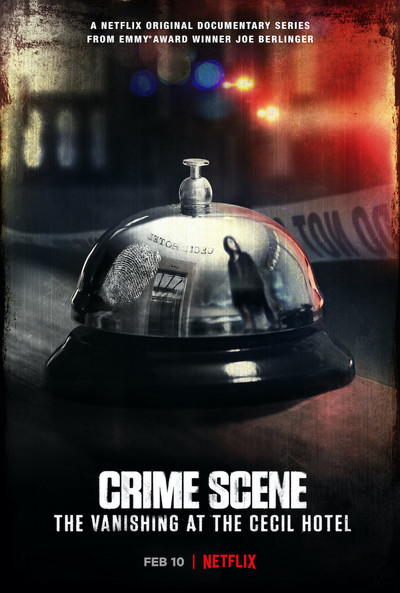 Crime Scene: The Vanishing at the Cecil Hotel (2021)