How could anyone forget 2010’s wildly hilarious gore-fest “Piranha 3D” and its gross-out buffet of dismembered spring-breakers? Don’t anticipate a comparable dose of gory schlock flood in the white-knuckled gator movie“Crawl” from the same director. Instead, expect a tone anchored somewhere between a relentless thriller with various satisfying (if not predictable) jolts and a summer flick that only tentatively dips its toes into deliberate silliness, scared to fully go into the water. You might at times find yourself wishing that French filmmaker Alexandre Aja (“The Hills Have Eyes”) had gone all out for something that approaches the campy amusements of “Piranha 3D.” Nonetheless, “Crawl” has a reptilian bite in its nods to the tradition of underwater monster flicks. It’s certainly not “Jaws” (what is?), or even “The Shallows,” but sloshing around the hazardous deluge of a Southwest Florida town on the brink of devastation by a Category 5 hurricane comes with its own kicks.

And of course we are in Florida. Where else would we find some sturdy yet weathered folk who have seen it all and then some, when it comes to extreme climate and resulting predators opportunistically circling the defenseless for a feast? That’s probably why the professional swimmer Haley (Kaya Scodelario) seems just scared enough, but not terrified, the first time she meets the jaws of a humongous brute at her estranged single father’s overflowing basement; a grimy, rat-infested labyrinth she stubbornly plunges into to check up on the old man she and her sister have not heard from in a while. In fact, she looks more irritated than afraid at the inconvenient sight of these nuisance neighbors who drop in uninvited for a meal.

In due course however, the panic of Haley and her father Dave (Barry Pepper) rises to the occasion, with co-writers Michael and Shawn Rasmussen throwing a series of claustrophobic, near-fatal challenges at them and sending a string of doomed side characters to the rescue, only to make us shriek at their helpless screams as they get eaten alive by the unforgiving beasts moments later. Meanwhile, Aja unravels some decent visual tricks he has up his sleeve. Among the scenes conceived as a clear nod to “Jurassic Park” is an effective one where a second, hidden-from-view gator materializes while the two carnivores strategically attack Haley like a pair of synchronized Velociraptors.

In the segment spent in the dark basement (the majority of the film’s 87 economic minutes), Aja utilizes location-specific features to drive the action forward before he runs out of (and thus, redundantly recycles) ideas. One moment, we are in a compartmentalized safe spot surrounded by pipes and wires that block the crusty creatures; the next, we follow Haley to dangerous entry or exit points as she makes risky leaps to find a way out. Meanwhile right across the street at a convenience store, we briefly follow a group of looters trying to evacuate after what looks to be a lucrative robbery. (Hint: they don’t get to evacuate but the scene among the shop’s flooding aisles is a fun diversion.) And we haven’t even mention the very good family dog Sugar yet, a miniature schnauzer-terrier of sorts who thankfully lives despite being put in danger’s way by her humans. (Yes, the dog lives!)

In direr news, Aja spends too much time in the ghastly and by all accounts, nasty basement—you desperately want to go outside where greater dangers surely await. Scodelario seems game for the punishing conditions however. She basically Kate Winslet-s her way through those unsafe pipes like a resilient passenger of the ill-fated “Titanic” as the entire world sinks around her. Don’t ask how she implausibly manages to keep all her limbs in tact however, after being the object of various severe bites and savage captures throughout. You’re also better off not questioning the sincerity of the laughably stagnant (and poorly dialogued) bits where Dave and daddy’s girl Haley settle old family scores about Haley’s mother—perhaps in the midst of an alligator attack is not the best time or place to analyze a family ordeal.

Still, “Crawl” offers up an adequately engaging disaster package with storm and gator effects of gripping believability. Far from a top-shelf entry to the genre, it might sink its teeth into your skin just deeply enough if you’re hungry for some mindless action mercifully devoid of tired superheroes and talking animals. It’s not a good movie, but not a bad time at the movies, either. 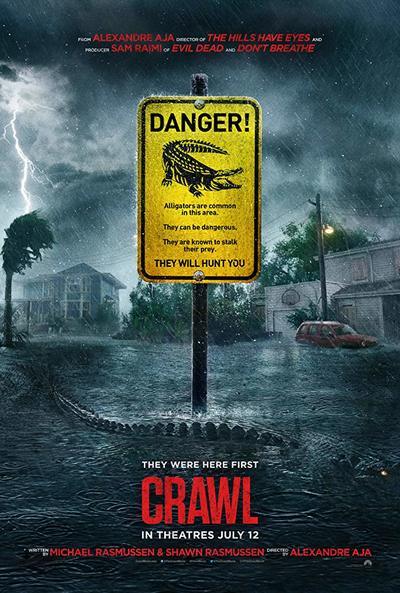