You know how, in the aftermath of a killing spree, neighbors often come forth and tell members of the media that the presumed perpetrator was just an average Joe who didn't bother anyone and never caused any trouble? "Crave," a creepy and deliberately paced thriller that is effective in its unpleasantness, is about exactly that kind of psycho next door.

From his outward appearance, Aiden (Australian actor Josh Lawson of TV's "House of Lies") suggests a shy and somewhat awkward thirty-something guy who hasn't fully committed to adulthood, judging from his lifestyle. He is a loner in a depressed area of Detroit (with Chicago as an occasional onscreen stand-in) who drives an ugly clunker that barely starts and is reduced to watching comedian Gallagher smash watermelons on TV.

But while he might look like a scruffier version of Chandler from "Friends," there is more than a smidge of Travis Bickle seeping into his psyche. It seems that Aiden hears voices in his head that urge him to commit gruesome acts of violence against those who offend his standards of conduct, from public-transit sexual harassers and drug addicts to bullies and the clueless lady in the grocery line who keeps banging her cart into him.

He fantasizes about a kind of street justice that involves outlandishly gory payback. The aftermath generally involves Aiden being declared a hero and receiving the abundant gratitude of others.

Who among hasn't wanted to get medieval on the jerks who don't play by society's rules and ruin everything for the rest of us? Luckily, most of us just deal with it and move on. For a while, so does Aiden as he successfully keeps his daydreams from bleeding into his real life, although it doesn't help his mental state that he earns money by shooting photographs of grisly crime scenes (the clientele for such portraits is never revealed—perhaps for the better). The only friend this would-be Weegee seems to have is Pete (Ron Perlman, giving the movie an immediate lift whenever he shows up), a caustic if amiable cop who allows Aiden access behind the yellow-tape barriers to ply his trade.

With a kinship formed around their mutual history as recovering alcoholics, Pete serves as a father confessor. Sensing his grip on reality is slipping, Aiden tells the police detective that he feels "divergent" and wants to maliciously strike back at the world. Says Pete, "You know this old angry white man routine? It's very cute. It's very 1992. I like it." That might be a reference to 1993's "Falling Down," starring Michael Douglas as an unemployed defense worker who goes on a rampage of retribution. Or maybe there was a surplus of postal workers taking their frustrations out on their fellow workers that year.

"Crave"'s primary precedent, however, is 1976's "Taxi Driver," especially after Aiden falls for Virginia, an attractive young woman in his apartment building (Emma Lung, an Aussie whose persona here is a mash-up of Aubrey Plaza and Zoey Deschanel). The attraction is mutual at first, but the relationship unfortunately emboldens Aiden to allow himself to not just be more approachable to females but to act upon his destructive and ultimately deadly impulses with less and less remorse. He reaches the breaking point after Virginia dumps him—much like Robert De Niro's cabbie going off the deep end after Cybill Shepherd's campaign volunteer rejects him.

The climax, which takes its sweet time in arriving and features Edward Furlong as Virginia's abusive ex-boyfriend, is more Grand Guignol comedy of errors than expected. But it still isn't pretty.

In his narrative feature debut, director Charles de Lauzirika—a documentarian known for doing extras for special DVD editions of classic films, especially those by Ridley Scott—knows more about setting a palpably uneasy mood than creating a strong narrative drive. As a visual representation of the windmills of Aiden's warped mind, he places numerous pinwheels spinning madly in planters outside of his protagonist's picture window. As Pete would say, it's very cute.

But once we lose any sympathy for Aiden as he grows increasingly out of control, it is harder to care about what will happen next. Is "Crave" an attempt to comment on a society that glorifies violence while producing a generation filled with potential Aidens who disassociate themselves from the rest of the human race? Maybe, but mostly it is about one guy going nuts.

And what does that title mean? It probably doesn't refer to the convenience-store chips that Aiden likes to munch on. But if it means that the movie will leave you wanting something more substantial, then it is highly appropriate. 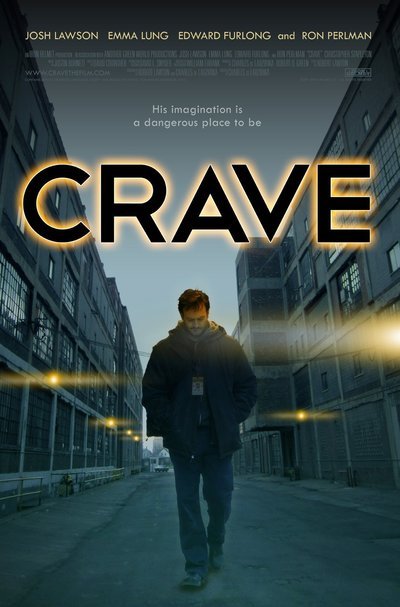