A guy and a girl bicycle slowly through the streets of Copenhagen, the colored buildings and wide canals their placid and beautiful backdrop. The sun is setting, the shadows lengthening, making the city seem less like an actual place than a dream space, one where truth can come out, where the regular rules of everyday life no longer apply, where something else is possible. In its best moments, "Copenhagen," the debut feature of Mark Raso, who also wrote the script, takes place in that dream space.

On the surface, the film sounds like Richard Linklater's "Before Sunrise" or any number of other meet-cute-in-a-foreign-city stories. But very quickly, other things start to come to the surface, things that don't quite fit. The tension between the expectations that arise due to the familiar genre and what is actually happening onscreen makes "Copenhagen" special, and a bit strange. There's also the undeniable fact that the girl in the film is, in actuality, a girl. She's half the age of William, the lead character. So any possibility of romance is distinctly illegal in nature. "Copenhagen" doesn't shy away from that, and is unafraid to allow that queasy reality to come to the surface. The film doesn't entirely work, but sometimes things that don't entirely work are interesting, bringing tension and unresolved issues that start to take over the film, almost by stealth. It's nice to watch something that isn't neat, that doesn't play it safe.

William (Gethin Anthony) and his pal Jeremy (Sebastian Armesto) are traveling through Europe, crashing in youth hostels. The whole point of the trip is to end up in Copenhagen, where William can try to track down the grandfather he's never met. William's dad was abandoned by his father. And William's dad was no great shakes in the father department either. William has a lot of free-floating resentment and rage because of that. He found an unsent letter his father wrote to his grandfather. It's in Danish so he has no idea what it says, but he wants to deliver the letter, decades after it was written. You get the sense that William is not looking for a loving reconciliation but confirmation that father figures suck.

The trip immediately goes off the rails because Jeremy has brought along a girlfriend. William is so hostile and unpleasant from the get-go that it starts to call into question his presence as the lead of the film. He's nasty to Jeremy's girlfriend in a particularly lecherous way; he's vicious to Jeremy when they argue about her; he's a whiny petulant figure. This nastiness is not just an attitude, it's William's default personality. Gethin Anthony is excellent in that he does not soft-pedal these qualities, and does not try to plead his character's case for the audience. He allows William to be as nasty as he is written. It can make "Copenhagen" a trying experience, but there is interesting stuff on the other side of it.

After William and Jeremy part ways, William is left to his own devices in Copenhagen. He needs to find the address on the envelope because he thinks maybe his grandfather still lives there. His initial queries are unsuccessful. Everything changes when he meets Effy (Frederikke Dahl Hansen), a waitress in the hotel cafe where he is staying. She clumsily spills coffee on his table, and he doesn't seem to realize that it is supposed to be a meet-cute moment because he is rude and ungracious in response. In a later encounter, he tells her about his search for his grandfather and her interest is piqued. To Effy, it's kind of like a detective story, and she takes the lead: she knows that address on the envelope, she wants them to go check it out together.

Effy is intelligent, resourceful, and seems to have unlimited amounts of time to wander around Copenhagen with this rude American man, tracking down leads. At first it seems that Effy will be forced to take on the burden of having to be the now-predictable Manic Pixie Dream Girl: "the one" whose only purpose in life is to lighten up the gloomy male lead. She has a pink plastic camera and is impulsive to the point of recklessness. But Effy, like William, does not quite fit into the genre requirements. She starts to emerge as an individual. Much of this is due to the grounded performance from Hansen. She suggests that Effy is not complete yet. She's still in formation, acting a role a little bit, as young girls sometimes do.

There's a beautiful and strange scene where Effy takes William into one of the museums in Copenhagen. She wants to show him something. It's a bust from ancient times, a female, and she moves to stand right next to it, her silhouette and the bust's silhouette highlighted by the thin white stream of light coming in from the window. Mark Raso allows that image of the two heads side by side to just sit there for a long time, still and silent. As the image settles, it becomes clear that Effy and the bust are practically identical twins. Effy whispers, "I've never shown this to anyone." William runs his fingers over the bust's face, in wonder at the resemblance. There's an eroticism in the moment, problematic and uncomfortable due to the age discrepancy.

What is so beautiful about that scene, though, is that it is beyond meaning. The image onscreen is what is important, and what it might mean is up for grabs. It makes Effy's inner life a place of mystery and power. She has gone to this museum a lot to visit her doppelgänger. She has wondered about that woman in ancient Greece or Rome, wondered at the connection. She feels in touch with something eternal in herself. None of this is stated explicitly but it pulses off the screen.

What one may expect to happen does not exactly go down as planned. "Copenhagen" remains true to its own original and somewhat prickly course. There are moments when it is not clear at all why Effy is even choosing to hang out with William, who is rude and combative (in moments big and small). But she wants to know what happened to William's grandfather. Over the course of the film an interesting thing starts happening. William starts to take responsibility for the words he uses. He starts to actually listen to himself and do his best to change course. A lifetime of being a rude rage-boy will not vanish overnight, and a lesser film would have made it Effy's job to show him the better way. But "Copenhagen" isn't really about that. Nobody can save you. You have to save yourself.

Talented cinematographer Alan Poon gives us dreamy beautiful shots of the city, its buildings, canals, cobblestone alleyways, crowded nightclubs. His work helps ground the film. "Copenhagen" knows life is complex, and knows that most of us are messes most of the time. Hopefully we all do our best and try not to hurt one another; try to be kind. William doesn't quite get that, not yet, because he's too self-righteous and pissed off. But the film is, in many ways, his lurching journey towards starting to understand that his character is up to him and him alone. 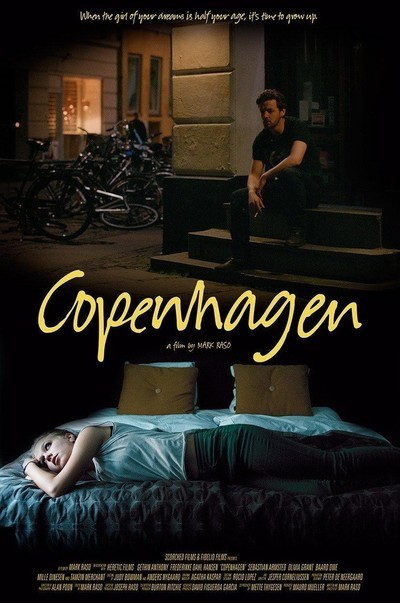