Should our multi-media, multi-decade fascination with zombie apocalypses ever prove as actual forecasting, the various fictional tales about this horror phenomenon should have us prepared for any scenario. Thanks to “Cooties,” we're now ready for ravenous elementary school kids tearing up human flesh during recess, although without much imagination from this script as to how this course of events, or its morbid goofiness, would ensue. Finally unleashed onto limited theaters and VOD after premiering at Sundance in 2014, “Cooties” is a midnight movie for those fine with dozing off about twenty minutes in, once the charm of its single sentence log-line has worn off.

In this horror comedy directed by Jonathan Milott and Cary Murnion, the original carriers for the corporate oopsie-daisie virus are chicken nuggets. In a gripping opening credit sequence, we see the step-by-step process of a nugget's creation, beginning with the ominous killing of a chicken: its initial mashing into the form of goop, as then turned into glop, breaded, and then hoisted in nugget-form into a little girl's mouth, where she bites into it and some gray pus pops out. But this Dr. Seuss from Hell moment is about the peak of memorability for this particular zombie adventure, which then follows Elijah Wood's burned-out writer now-substitute teacher Clint, on a fateful day back to his old elementary school. The girl from the opening credits is a student in his class, and when she attacks a punk kid named Patriot (who was born on 9/11, one of this dark comedy's only good jokes), all zed hell starts to break loose. The kids pass each it on just by touching each other, true to the film's name. And this chicken nugget virus can only be spread to those who haven’t hit puberty. Still, all adults are doomed as fresh meat.

To survive the swarm, Clint teams up with a kooky batch of teachers, consisting of often-funny actors this movie lazily treats with a broad attitude. Rainn Wilson plays a macho gym teacher whose dorkiness precedes him, adorned with a handlebar mustache and a massive truck in the parking lot whose "dual rear wheel" feature he can't pronounce properly. There’s also Alison Pill's Lucy, the welcoming but emotionally repressed teacher whose thinly-written experience will leave one pining for her peppy teaching days aboard Snowpiercer in Bong Joon-ho’s film of the same name. To create tension between the two, Wade and Lucy are dating, while Clint harbors a schoolboy crush for her. Despite these three interesting actors, very little arises from this character tension, each of them having to fall back on their basic construction, their dynamics sharing the same fate.

Brought along for the shenanigans are Jack McBrayer, Nasim Pedrad and Jorge Garcia, each with very few jokes to offer, and even less story involvement (McBrayer plays a man whose single joke is that he’s gay, for example). The script's quirkiness is hoarded by two characters: Ian Brennan’s zany, hippie vice principal, and Leigh Whannell’s sex-ed teacher Doug, as comically introduced reading a book on how to start conversations with people. It doesn’t seem to be a coincidence that these last two are also the film's screenwriters. Perhaps even they were trying to write themselves out of the project's abysmal sense of humor?

Though “Cooties” keeps a playful attitude, there’s no jolt of surprise to be found within the teacher group’s various survival shenanigans. They are simply relocated from one location to the next, with inserted shots of hungry kiddies providing neither horror nor comedy to their journey. Every now and then a clever script detail might rise above its self-inflicted sea of boredom; I laughed when Doug casually remarked “Oh, look, carnage!” about the kiddies causing bloody havoc outside, and was later surprised to see a weapon made out of a batting cage machine. But when a racist character plops into the third act to be a hero, it isn't a disappointment for “Cooties,” just a confirmation of its limited, toxic imagination.

Milott and Murnion’s unpromising directorial debut is the type of movie to also sabotage its visual potential, creating a plain genre event out of a unique setting and horde for its zombie apocalypse. Even its curious promise of mixing a fourth grade classroom’s color palette with blood and guts leaves a monotonous sight. Meanwhile, the action of kids running around playing epidemic seems like much more fun for the young actors; the grown-ups are stuck watching edge-less violence that is over-prepared and chopped up with protective cutaways.

“Cooties” is appropriately silly, but it isn't sharper than an elementary sense of humor or horror. There’s no inspiration outside of its concept to push viewers towards the unexpected, relying on the yawning shock of kids getting in touch with their inner bad seed. “Cooties” is meant to be a big joke, but with such a stunted imagination for its story or style, it’s only a single gag. 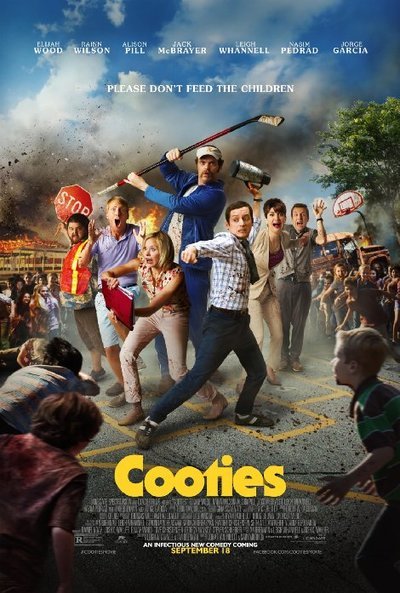 Rated R horror violence and gore, language including sexual references, and some drug use