"Do you think there are people on other planets?"

"I don't know. But if it's just us, it would be an awful waste of space."
-- Dialogue from "Contact"

You can hear an echo there of the hopeful, curious voice of the late Carl Sagan, who spoke optimistically of "billions of billions of stars," and argued that if life can exist at all (and it can), then it should presumably be found all over the universe. Sagan's novel Contact provides the inspiration for Robert Zemeckis' new film, which tells the smartest and most absorbing story about extraterrestrial intelligence since "Close Encounters of the Third Kind."

It also makes an argument that sounds like pure common sense. Because the universe is so awesomely large, it would hardly be practical for alien beings to go zipping around it in spaceships, tracking down hints of intelligent life. Why wouldn't they simply set up an automated program to scan the skies for signals--and then auto-respond with instructions on how another race (ourselves, for example) could contact them? That would be faster, easier, cheaper and less of a waste of resources, since if we're not capable of following the instructions, we're not ready to meet them.

This idea, so simple, so seductive, inspires the intriguing payoff of "Contact," which stars Jodie Foster as Dr. Ellie Arroway, a radio astronomer who has dedicated her life to the cosmological field of SETI (Search for Extra-Terrestrial Intelligence). She uses a giant radio telescope in Puerto Rico to scan the skies for signals that might originate from intelligent beings. One clue would be a series of prime numbers, which can be easily transmitted in a universal code, would be the same everywhere and would stand out from random radio noise.

The movie is about Ellie's search, but it is also about her mind and personality. It's surprising to find a science fiction film exploring issues like love, death and the existence of God; science fiction as a literary form has of course explored those subjects for years, but sci-fi movies generally tend toward titles such as "Independence Day," and are about actors being attacked by gooey special effects. (Why do we always assume aliens will be bug-eyed and ugly? The next time you look in the mirror, ask yourself how you'd feel if you were a cat, and Earth was visited by something looking like you.)

Ellie's scientific quest is a lonely one. Her superior, Dr. David Drumlin (Tom Skerritt), tells her the SETI field is tantamount to professional suicide. She's needled ("Hi, Ellie. Still waiting for E.T. to call?"), but her obsession runs deep: With her father (David Morse), she shared the excitement of picking up distant stations on a ham radio outfit. He died while she was still young, and she became convinced that somehow, someday, she could contact him.

This conviction is complicated by the fact that she does not believe in God or the supernatural; perhaps her SETI is a displaced version of that childhood need. In Puerto Rico, she meets Palmer, a young man who does believe in God. They have a brief but tender and important love affair, and then, when the dubious Drumlin pulls the plug on her research, she leaves for New Mexico and an alternate research site.

Before they separate, they talk about a paradox: Pondering the immensity and mystery of the universe, you're tempted to explain it with a concept like God, and yet you wonder if "God" isn't a patronizing simplification. Ellie and Palmer disagree about God; as viewers, we are surprised and pleased that the movie lets them debate the subject. Most Hollywood movies are too timid for theology. (Question for discussion: Should man's first emissary to an alien race be required to believe in God? And if so, whose?)

Ellie's research project has been all but ended when there's a sudden breakthrough: unmistakably intelligent signals from space! Drumlin, in the manner of all bureaucrats everywhere, conveniently forgets his opposition to SETI and smoothly takes the credit. The signals, which include a startling bounce-back of a TV image from Earth, provide a schematic diagram for a machine that, apparently, would allow a representative of the human race to travel to the home of the race that sent the signal.

Zemeckis has filled his movie with intriguing characters, played by good actors. There is, for example, old Hadden (John Hurt), a billionaire incorporating elements of Howard Hughes and Armand Hammer. He follows Ellie's search and commands vast resources of his own. And there are two presidential advisers (James Woods and Angela Bassett) who, in the great tradition of movies about aliens, consider the signals to be a possible threat. And there are others, but I will not describe them, in order to leave key secrets intact.

What happens in the last third of the film, indeed, I will not describe. Some of it you can guess. You may be guessing wrong. In a later article I'll speculate about what happens, and whether it happens the way it seems to. Zemeckis uses special effects to suggest the climactic events without upstaging them. (Earlier effects, however, that seemingly incorporate President Clinton into the film are simply distracting.)

Movies like "Contact" help explain why movies like "Independence Day" leave me feeling empty and unsatisfied. When I look up at the sky through a telescope, when I follow the landing of the research vehicle on Mars, when I read about cosmology, I brush against transcendence. The universe is so large and old and beautiful, and our life as an intelligent species is so brief, that all our knowledge is like a tiny hint surrounded by a void. Has another race been around longer and learned more? Where are they? We have been listening for only a few decades. Space and time are so vast. A signal's chances of reaching us at the right time and place are so remote they make a message in a bottle look reliable. But if one came. . . 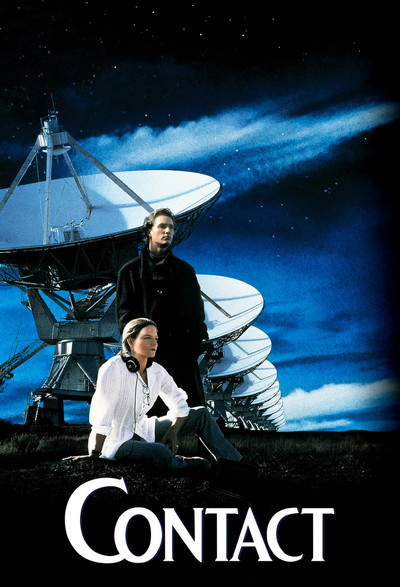