Coming Through the Rye

The story of a young man’s search for author J.D. Salinger in the late ‘60s, “Coming Through the Rye” is a warm-spirited romantic drama that benefits from James Sadwith’s confident writing and direction, especially the appealing performances he gets from his two young leads, Alex Wolff and Stephania LaVie Owen.

While the film’s story was reportedly inspired by a youthful pilgrimage of Sadwith’s, and obviously reflects the passionate identification young readers of many generations have felt with Holden Caulfield, the protagonist of Salinger’s The Catcher in the Rye, it’s a rather inexact tribute to the book in a sense that’s indicative of the film as a whole: rather than being full of Caulfield’s profanity, its language is clean enough for a Disney TV movie. Indeed, if Caulfield had grown up to make a movie from his experiences, it surely would have been saltier and more rough-edged than this.

Of course, since Salinger was notoriously protective of his copyrights and always dead-set against a movie being made from The Catcher in the Rye, we don’t hear as much as a line from the book quoted in “Coming Through the Rye,” which may seem curious given that its premise is that a teen prep school student has written a very faithful theatrical version of the book and wants Salinger’s blessing before staging it.

The student in question, Jamie Schwartz (Wolff), finds himself in a harsh scholastic situation that in some ways echoes the one that Caulfield escaped from in the novel. Speaking to the camera in Caulfield-like monologues (a device that thankfully isn’t overused), he explains that he’s a New Jersey kid with an older brother whose exploits inspired his desire to attend a boarding school. But when he arrives at Crampton Prep in Pennsylania, he finds an all-male, clique-infested environment where he’s a nerdy new kid with few friends. And the situation gets much worse once word gets out that he has spoken to a master out of concern for his closest pal’s drug use.

Indeed, Jamie becomes so unpopular that when he plays Mercutio in a school production of “Romeo and Juliet,” his schoolmates cheer his demise. Yet the show does have the benefit of introducing him to Deedee (Owen), a cast member from a nearby girls’ school. She’s clearly interested in him from the first, though his one obsession is mounting his dramatic rendition of The Catcher in the Rye.

Advised by his teachers that he needs Salinger’s permission, he tries to get in touch with the author via his agent and publisher, but to no avail. After his tormentors at Crampton pelt him with firecrackers and try to beat him up one night, he decides to bolt the school. And when he tells Deedee he means to try finding Salinger in New Hampshire, she offers to drive him.

Their road trip is the film’s sentimental heart. Both kids are virgins but romance buds as their quest continues, and the tentativeness of their growing attraction is put across with sweetness and assurance by Sadwith and the actors.

When they reach the town where Salinger supposedly lives, they find a bunch of tight-lipped locals who’ve obviously been schooled in fending off nosey outsiders. But some kids playing in a pile of leaves haven’t gotten the memo yet, and they help Jamie and Deedee locate the house of an author whose name is synonymous with “reclusive.”

Chris Cooper is hardly a Salinger lookalike but he has no problem playing gruff and irked, so he’s just fine as the intruded-upon novelist. When he hears why Jamie’s come, it’s clear he’s been importuned on this same subject countless times before. "Elia Kazan offered me a million dollars for The Catcher in the Rye,” he tells Jamie. If I didn’t give it to him, why would I give it to you? The boy retorts that his play was written “with a pure heart,” and because 99% of its dialogue came from Salinger, it renders the book exactingly.

Salinger replies that the book is meant to play in the theater of every reader’s mind, and thus any stage or film version would inevitably involve an interpretation that would dilute and distort the reader’s relationship to the original. This is a powerful argument, and Jamie has no comeback. But that doesn’t mean he leaves the author’s house assuming he can’t stage the play he’s written.

While The Catcher in the Rye was published at the beginning of the reputedly buttoned-down and conformist ‘50s, its rebellious urges arguably found an even more sympathetic audience during the social upheavals of the late ‘60s, a connection that “Coming Through the Rye” captures nicely. And while Jamie for much of the story seems far less troubled and anguished than Holden Caulfield, a third-act plot twist (no spoilers here) deepens his character in a way that makes his story more credible and satisfying.

A side note: Back in the ‘90s this reviewer tried to get in touch with J.D. Salinger after writing an article in the New York Times about an upcoming Lincoln Center festival of Iranian cinema that included a film adapted from a Salinger novel. “Pari,” by the great director Dariush Mehrjui, derives from Franny and Zooey and owes its existence to the fact that there are no copyright agreements between the U.S. and Iran.

After Salinger’s representatives threatened to send U.S. marshals to seize the film, it was spirited out of Lincoln Center and I wrote to the author urging that he at least look at the film. Just as Jamie assumed that Salinger would change his mind if he read his play, I thought that if he saw “Pari,” he would find it truly fascinating and let it be shown. And like Jamie, I heard nothing back from him or his agent.

But ultimately, I can’t complain, because I’m hugely grateful that Salinger didn’t let his books be made into movies. If he had, by now there’d probably be five or six versions of The Catcher in the Rye, all groaningly inferior to the version we’ve all directed in our minds. In that sense, “Coming Through the Rye” may be the closest we’ll ever get cinematically to the novel. And in being so far away from it, it’s close enough. 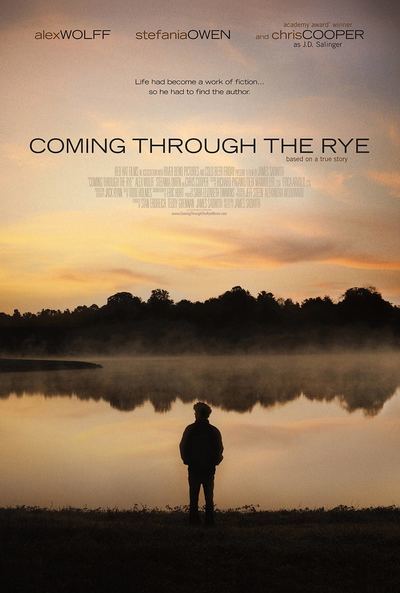 Rated PG-13 for some drug material, sexuality and language.