A knife slices through a short rib in the opening frames of “Coming Home Again,” a subdued gut-punch from director Wayne Wang (“The Joy Luck Club”) that adapts a personal essay by Korean-American author Chang-rae Lee. Delicate and precise, like the film itself, the cut doesn’t separate the flesh from the bone completely. The goal is for the richness of the latter to impregnate the marinated meat in a dish known as kalbi.

The culinary analogy, referencing an inextricable bond, rests at the center of this drama where a son  puts his career on hold to look after his mother, who is suffering from terminal stomach cancer. Now the primary caretaker, Chang-rae (Justin Chon), a writer who had a job in New York and is back in San Francisco, quietly moves through the day tending to his frail Mom (Jackie Chung). A drab mood coats the house, as if the air of pain was trapped between its walls and no window had been opened to let it flow in months.

Their mother-son bond, fractured and mended over the years, has now reached its final form. One in which, ideally, time serves for them to cherish each other’s presence rather than reproaching past mistakes. But human as humans are, that’s easier in thought than in practice. Even as Mom’s self-sufficiency decreases by the day, arguments flare between her and Chang-rae over his instinct to help her and her fight to retain some autonomy. Other times the conflict stems from her openness to religious consolation and his distaste for it.

In Wang, a key figure in the history of Asian-American cinema par excellence, Lee’s words found the ideal interpreter. The director is deliberately austere in his choices, from the sparse spaces with muted colors to the absence of music except in instances when it’s diegetic and tied to a plot point involving Chang-rae’s father (John Lie). Rarely does the camera step into the room where Mom stays, instead it witnesses from outside the converted family room as some of the more charged conversations unfold inaudible to us. Chang-rae’s narration acts as the audience’s entryway.

Flashbacks to the early days of the illness and Chang-rae’s homecoming are painted with warmer light. Undoubtedly simple, Wang and cinematographer Richard Wong’s clear-cut distinction between a luminous recent past and the stark present nonetheless intensifies the realization that things will never be the same. In those memories, Chang-rae and Mom grapple with the invisible barriers he put into place to keep her away from his American life. Under the strenuous circumstances, food becomes Chang-rae’s bonding agent. The act of preparing labor-intensive delicacies to delight the others is also a tribute to her legacy, to what will endure.

Chon, a sensitive director in his own right behind features like “Gook” and “Ms. Purple,” is in optimal acting shape. Chang-rae is falling fast into a mental abyss; his emotions are in disarray. Impeccably, Chon plays him as a man trying to contain that storm that brews within. It’s only in the final stages of the heartbreaking ordeal that Chang-rae’s behavior, mourning while his mother is still alive, and the actor lose touch with film's understated grace. But even those small narrative diversions feel somewhat justified if not exactly subtle.

As great as Chon is on his own, including a moving and tonally intricate scene where Chang-rae meets an old friend, the movie is a two-hander. A devastating Chung dignifies a mother in physical agony, but who still questions herself and those around her. Hers is a double performance, one staring at the end of life and another, while still more lucid, taking stock of what she built in it and her shortcoming while doing it. Each confrontation with Chon’s character is utterly cathartic.

“My job is to be your son,” an angry Chang-rae tells her when she questions his decision to set aside his profession to come care for her. There are also tender exchanges of a child meeting his parent as an individual who had a life before being responsible for another person’s survival. Through all of these glimpses of a relationship trampled and perhaps accelerated by illness, the constant is an ambivalence about every decision that brought them here and the unspoken resentment that has to be relieved now or never.

“Coming Home Again” doesn’t sanctify the image of the mother, but instead aims to truly capture the full-bodied personhood of the woman Lee put on the page. Amid the trauma that the co-leads undergo, Wang examines the rips and repairs in the connecting tissue between us and the people who, through their action or inaction, mold us into who we are. 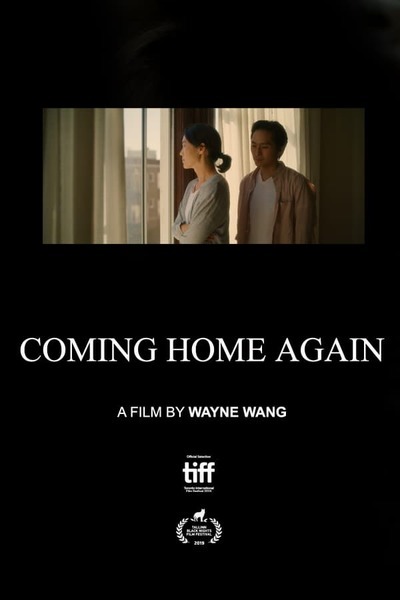