Not too long into this period film, set during one fateful day in Paramount, California, the title’s racial epithet is spray-painted on the car belonging to Eli, who runs a crumbling-looking shoe store on a pretty desolate corner of the town with his brother Daniel. The slim, wiry Eli, played by the movie’s writer/director Justin Chon, and the stocky, slightly lumbering Daniel, played by David So, are Korean-Americans in a struggling neighborhood that’s largely populated by African Americans. Mr. Kim, another, less assimilated (and older) Korean who runs the liquor store across the street, is suspicious if not downright hostile of his clientele. But Eli and Daniel are into hip-hop culture, and the 11-year-old girl who helps out at their store, and with whom they have a more positive relationship than with each other, is black.

The aforementioned fateful day is April 29, 1992, the day many “not guilty” verdicts were handed down in the Rodney King case and South Central L.A., along with outlying areas, erupted in rioting and looting. The graffiti is painted on Eli’s car before the announcements. That’s just how it is for the brothers; the possibility for outright hostility exists in every interaction, as for instance when Daniel tries to explain to an irate customer that the sales discount on a particular pair of shoes doesn’t exempt them from taxes.

Their young friend Kamilla is lively and affectionate, with a not-too-wide streak of mischief. She annoys Mr. Kim greatly, and cuts school to be with the brothers. She’s got a furious thuggish brother Keith (Curtiss Cook, Jr.) and a kind sister, but no parents to speak of. Daniel and Eli, too, seem to be permanently without their dad, who founded the shop. The connecting back story emerges over the course of the movie.

Shot in widescreen black and white, the movie is at its best when depicting the friendship between the kid and the older kids. Explaining her presence in the store to customers, Daniel says, “She’s adopted.” Eli says, “She’s half Korean, half black.” And Kamilla tops it off with “I’m being held here against my will.”

But the moments of charm and fun are few. “Gook” makes some halting attempts to get down to causes in examining the affinities and antagonisms in communities where both Asian Americans and African Americans are trying to get ahead. Daniel has ambitions to become an R&B singer, and his interactions with a local aspiring record producer have some spark, but the movie’s pivotal event puts an end to that. In the interest of generating or furthering tension, writer/director Chon sets up situations that make the characters look maybe a little dumber than they ought to. When one customer tries to pay for shoes with a 50-dollar bill, Eli can’t make change. So he dispatches Kamilla to go to Mr. Kim’s to ask him to break the bill. It’s been made abundantly clear in a prior scene that Mr. Kim despises Kamilla and will at the very least smell some kind of rat when she approaches him with a 50. And of course he does, and it gets a little worse.

The constant fighting between Dan and Eli is also as monochromatic as the movie’s look. “Every f**king day you give me s**t about the same f**king thing!” Daniel screams at Eli as he locks himself in the car. “Open the f**king door,” Eli yells back. If this is verisimilitude, it’s kind of self-defeating. Everyone is so keyed up that the drama takes on a kind of zero sum game quality. The constant stream of eruptions, temperamental and otherwise, leads to a genuinely upsetting climax. But there’s not much to take away from the movie besides its sound and fury. 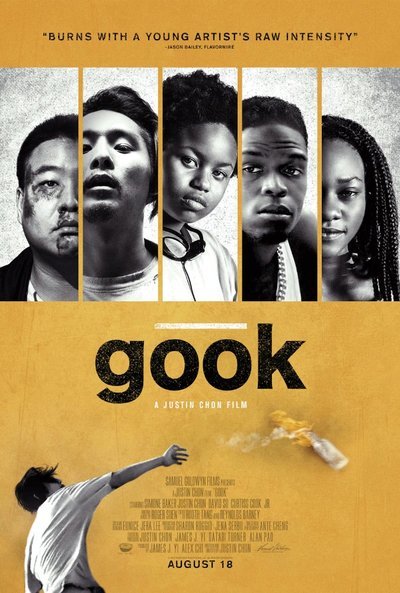 David So as Daniel