Like “Dunkirk” and “Detroit” before it, “Clash” is cinema for the five senses that aims to seize a viewer in one anxious historical moment and not let them go, even after the end credits. The setting for co-writer/director Mohamed Diab’s harrowing film is that of Cairo, Egypt in 2013, two years after the Arab Spring. People have taken to the streets to protest the army’s forceful ouster of President Morsi, who was a member of a group called the Muslim Brotherhood. Introducing its events as “one such day,” “Clash” presents people of all beliefs caught in the crossfire, who are brought into the van whether protesting the army, the Muslim Brotherhood, or the overall chaos itself. Diab conveys this to us with the limited, impressively-realized perspective of being trapped inside a sweaty, cramped police van.

The first people thrown into the van are two journalists, an Egyptian-American named Adam (Hany Adel) and Zein (Mohamed El Sebaey), who work for the Associated Press. The police do not trust them, and think they are spies for the Muslim Brotherhood. When a gang of people arrives to throw rocks at the police van, not even knowing who is inside, more people are arrested, like a mother (Nelly Karim's Nagwa), her husband and their young son. The three are outraged about the chaos overall, with no allegiance to either large side. Later on, actual members of the Muslim Brotherhood are brought into the van, and tensions are raised about the people inside. Outrage swells on the inside, and we are trapped. The cinematography sometimes has a virtual reality effect, along with the ever-impassive nature of how Diab coordinate these close quarters and all of these characters.

All of these different people are in a police van, their allegiances unknown to the outside world. The van proves to be a death trap of sorts for them, especially when they are being moved by the police, who are then the targets of protesters. When protesters throw rocks towards the police, it's not considered that someone inside the van could be hurt badly by the rocks, as does happen. The rocks instead come like a hail storm, weathered by the animosity they are experiencing as a microcosm inside the van. "Clash" can be ruthless to its characters and to its audience, the product of filmmaking that surges equally with adrenaline and moral outrage.

Curiously and stubbornly, Diab's story doesn’t take sides with its conflict. “Clash” is ultimately a tragedy, a movie that actualizes how people of differing views can indeed get along when put into the same sense of danger, but those same groups of people can hate each other if they don’t see the other side.

It's the character drama tends to make Diab’s sound vision seem otherwise incomplete, with some anxiety lessened in the process. You care more about characters in movies when they seem like real people and not just reflections, whereas this one goes for the latter. The funny guy in this chamber piece, for example, wears a strainer on his head and is fat and jolly. Or, as the movie takes time to let certain characters air out their own drama, one young boy even says to a young girl, “When I’m in school, we play army and MB. We slaughter the MB.” To which she replies, “When I play, we slaughter the army.” The story isn’t always so direct, but you notice when it seems too pat as creative non-fiction. It’s the wrong solution to Diab’s ambitious idea of including so many characters, and making them emotionally recognizable.

"Clash" is an impressively made movie from its opening long shots of people being collected by the van, to its heartbreaking finale where the hell they have come to fear seeks to swallow them. It’s crucial that Diab doesn’t skimp on the scope, as he orchestrates massive set piece protests that are filled with smoke, gun fire, and hundreds of people screaming, colliding, hurting each other. And as it goes from one cacophonous scene to the next, the sound editing and mixing of "Clash" creates a disturbing white noise of chaos. With the story’s limited perspective of being in the police van the whole time, we can only witness this past the shoulders of various characters or through the bars of the windows, but it all of this detail makes the overall experience even more claustrophobic. The world inside the van is unbelievably cramped, sweaty, and tense; the outside world rarely offers any more of a merciful environment.

Though it could use some dramatic tightness, “Clash” is a commendable film, in which its limited point-of-view says enough to the original horror and poignantly makes humanity a non-political issue. Diab effectively creates a monster of blind hatred, and then holds all of us as captors and witnesses to a hateful world tearing itself apart. 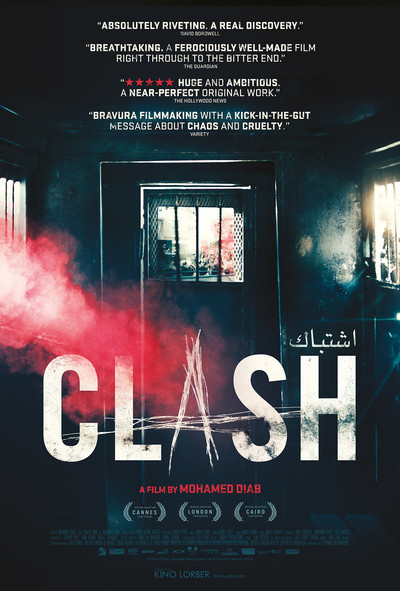