When you saw Christopher Nolan's “Interstellar,” did you come away from it thinking, “This was well-made, but imagine how it would even better with a Manic Pixie Dream Girl type”? For most of you, I am going to guess that the answer is “No.” For the rest of you, your extremely peculiar cinematic prayers have more or less been answered with “Clara,” a peculiar and largely unsatisfying Canadian film that tries to take viewers on a journey stretching from the depths of the human heart to the vast outreaches of space. Alas, the ambition displayed by writer/director Akash Sherman far exceeds his grasp and the result is a weird muddle that's both too silly to be taken seriously and too staid to completely go off the beaten path.

Dr. Isaac Bruno (Patrick J. Adams) is an astronomy professor who is borderline obsessed with being the first person to discover a planet outside of our solar system capable of sustaining life, a desire that has grown in intensity over the last couple of years following a personal tragedy that led to his divorce. Unfortunately for him, he's taken such a deep dive into his work that he's all but forgotten how to interact with people—the one lecture we see him deliver to students quickly devolves into a rant about how one is far more likely to find life in outer space than love on Earth—and that, along with unauthorized telescope usage, leads to him getting fired. Nevertheless, Isaac plans to continue his research using data taken from a recently launched satellite to find a potentially livable planet and advertises for a live-in research assistant to help him sift through the data and find one before some other glory-hungry astronomer does it.

The only person to respond to his ad is Clara (Troian Bellisario), an apparently homeless woman with an artistic bent who turns up on his doorstep one night with a dog in tow and absolutely no experience in astronomy, collecting data or anything else that the job might require. Just before he tells her that it isn’t going to work out, she starts marveling over his evidently awe-inspiring collection of vinyl albums (I say “evidently" since the only one that we actually see is a copy of The Freewheelin’ Bob Dylan—a classic, of course, but not exactly a rarity by any stretch) and he gives her the job. When they aren’t peering endlessly at data, they are having debates about their respective personal belief systems—she is an open-minded sort who thinks that everything in the universe is connected on some level and that science and faith can coexist while he refuses to invest himself in anything that doesn’t have plenty of hard facts and data to back it up. Eventually, the two make a surprising discovery and then find their previously strictly professional relationship growing a lot more complicated in its wake.

Earlier in this review, I made reference to a “Manic Pixie Dream Girl type.” It was a term coined by the excellent critic Nathan Rabin to describe a female character who spends practically all of her screen time helping a brooding young man learn to embrace life once again, without ever once demonstrating any hint that there's more to her existence than showing the guy how to stop and smell the roses and whatnot. Inevitably, the term has gone on to become misunderstood and misapplied, but it perfectly describes Clara and her position in the film bearing her name that it almost feels as if Sherman is doing an extremely poker-faced spoof of the entire concept. While we learn about the anguishes and torments of Isaac in excruciating detail—presumably so we can think of him as a tortured soul in need of guidance rather than simply as a self-centered jerk—we get to know virtually nothing about her at all as it becomes evident that Sherman is just using her as a prop to help Isaac eventually feel better about himself. This is especially frustrating in the later scene when it is suggested that there is much more to Clara than meets the eye at first.

And yet, even if you put all the Manic Pixie stuff aside, “Clara” is still a frustrating experience. The film does have a certain amount of grounding in actual scientific study (much of the action involves the Tess and James Webb space telescopes) but never quite manages to convey those details in a dramatically exciting manner. The evolving relationship between Isaac and Clara is also a disappointment—their discussions about science vs. faith are meant to be thoughtful and passionate but sound more like less-than-inspiring dorm room bull sessions, and the ensuing shifts in their relationship feel more like screenplay machinations rather than actual human behavior. Towards the end, "Clara" takes a potentially wild narrative leap—maybe not on the level of this year's “Serenity,” but close—but it doesn’t have the nerve to pull it off and it just comes off as silly rather than mind-blowing.

“Clara” certainly its ambitions, but it does so little with them that I almost found myself wishing that it was worse than it actually was—at least a more overtly terrible movie might have had a little more juice. The chemistry between Adams and Bellisario is clearly wanting (which is a bit odd considering that they are married in real life), the storyline is trite and formulaic (someone literally says to Isaac, “You spend all your time looking at the stars and you are going to miss what is right in front of you”) and by the time it starts getting stranger and more audacious towards the end, it is unable to shake the torpor that it has developed over the previous hour or so. At one point, Clara defends her willingness to believe that everything in the universe is connected somehow by remarking, “The universe can still surprise us.” Sadly, the same can't be said for “Clara.” 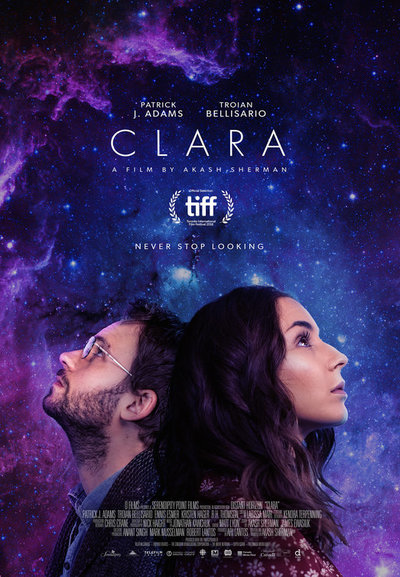 Will Seatle Bowes as Kiefer