"What did we do wrong? Us women?" In the documentary "City of Joy," this question is asked by Jane Mukunilwa, one of the first students in a refuge center for victims of sexual violence in the Eastern Democratic Republic of Congo. The center, named the City of Joy, opened its doors in 2011. Created by Dr. Denis Mukwege, a Congolese ob/gyn, and Christine Schuler Deschryver, a Congolese woman devastated by the ongoing violence in her country, City of Joy creates a safe space for women to recuperate, learn survival skills, heal, and go back out into their communities as leaders. "City of Joy," directed by Madeleine Gavin, provides an intimate look at the everyday workings of City of Joy, the classes and workshops, the women who flock there, and the uphill battles faced by Mukwege and Deschryver (both external and internal: the two of them have been traumatized by the war as well). You get the sense that City of Joy is a fragile yet essential bulwark against the unspeakable violence outside the center's gates.

"City of Joy" opens with Dr. Mukwege driving to work on a dusty road clogged with refugees fleeing their villages. He pulls up to the gates of City of Joy, and once inside, he puts on his white doctor's coat and gets to work. He speaks of his realization that rape was being used as a terrorizing tactic when more and more women were coming to him at Panzi Hospital with horribly injured genitals. He spends his days operating on the women at City of Joy, one after the other after the other, trying to repair their injuries. You can see the toll it has taken on him, although his sense of mission is strong. (He's been nominated for a Nobel Peace Prize multiple times.) Deschryver's grief at what has happened in her country is so palpable it makes her bright clothing and huge colored earrings seem like a deliberate choice: she has turned herself into a walking symbol of life and possibility and hope. Her presence is galvanizing to others. At first Deschryver balked at Mukwege's suggestion of bringing Eve Ensler, author of The Vagina Monologues, into their project (Deschryver has nothing but contempt for white do-gooders who come to Africa and take pictures like "we are animals in a zoo"). But Ensler has become a valued partner. City of Joy holds classes in sex-ed, journaling, self-defense, plus group workshops where people share their stories.

The war in the Congo is mainly an economic one, with many multinational companies in play, all of whom are after the rich minerals found in the country. These companies hire Congolese militias to "guard" the mines, and Deschryver says at one point, "We don't even know who is who." These militias have gone on a rape frenzy for decades, destroying the village cycles of farming and field cultivation. When women are afraid to go outside, everything stops growing, the entire culture is obliterated. There's a map shown of all of the mines in the Congo, each one surrounded by a bright red area representing the incidences of rape. The map shows, like nothing else can, the direct correlation between mining and rape. Coltan is one of the aptly-named "conflict minerals," used in making the majority of the electronics for the world, and there's a brief screen, shown almost in passing, listing all of the companies involved in operating the mines in the Congo. This could have been highlighted more strongly. These companies need to be held responsible for what they have wrought.

Jane Mukunilwa's story is just one of the many harrowing stories told. Mukunilwa's injuries were so severe it was thought she would not survive them. But now she has become one of the leaders at City of Joy, so determined to reclaim her life she is an inspiration to others. All of the women interviewed tell their stories with an openness which speaks very well of Gavin's process as a director, how deeply she had embedded herself in these womens' lives. There's trust between interviewer and subject.

One of the strengths of "City of Joy" is that while Eve Ensler's participation is not downplayed, she is not the film's "way in" to the world of City of Joy. A lesser film would have followed Eve Ensler around as she did fund raising events, flying in and out of the Congo. We see her at work in the center, teaching classes, we see her in tears as the women graduate, but interviews with her are minimal. This is not the story of a white woman's attempt to save Africa. The focus stays on Mukwege and Deschryver and the women at the center. This is the right approach. Gavin, who has worked as an editor for years, keeps the scenes flowing, knowing when to pause, knowing when to move on. The footage of the landscape is breathtakingly beautiful, aerial shots of lush green fields and thick emerald forests providing a stark contrast to the outrage of the stories being told by the citizens on the ground.

"City of Joy" is devastating and enraging, but the strength of the women profiled, their will to survive, to lay claim to their own bodies, is inspiring, although that's not quite the right word. It would have been better if they had not been brutalized at all. But they are survivors, and their bravery is a testament to what Mukwege and Deschryver have created. "City of Joy" is a powerful act of bearing witness. 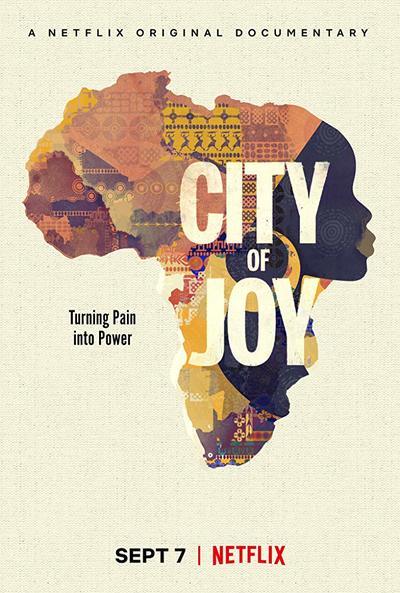 Denis Mukwege Mukengere as Himself

Eve Ensler as Herself