Cinderella has survived a lot over the years, first the wicked stepmother and the midnight curfew and then hundreds of versions and adaptations in books, on television, and in film, undertaken by just about everyone, including Walt Disney, Julie Andrews, Jerry Lewis, Drew Barrymore, Anne Hathaway, and Rodgers and Hammerstein. She is going to survive this tricked-up version, too, a mish-mash of relentless air quotes and sensory overload that wants to grab you by the shoulders and shout—no, sing—"BE ENTERTAINED." And sometimes we are. But it is less a movie than a string of TikTok clips and it made my eyes spin like pinwheels.

In fairness, my five-year-old cousin will love it. It helps a lot that the Cinderella story is a classic for a reason. The essence of this tale, about the mistreated but pure-hearted girl who gets the ultimate makeover and the classic fairy tale happily ever after ending appears in many cultures going back as far as recorded history. There are moments in this film where that imperishable story shines through, despite all efforts to clutter it up with snippets of pop songs and winks at the audience.

Each generation brings its own perspective to the Cinderella story. Recent versions focused on more diversity (the Brandy/Whitney Houston version), more agency ("Ever After"), or at least a better explanation for her obedience ("Ella Enchanted"). In this version, Cinderella (singer Camila Cabello) has big dreams of being a fashion designer and supporting herself so that she no longer has to live in her stepmother's basement. It also tries to give the stepmother (Idina Menzel) some understanding of the reason for her cruelty and tones down the mean girl element of the two step-sisters.

But the screenplay by writer/director Kay Cannon ("Pitch Perfect") overcorrects "Cinderella" and leaves the storyline unbalanced. It's possible to give the title character more aspirations, independence, and humor without dulling down everyone around her. But attributes are handed out here, one to a character, a challenge even the talented cast cannot overcome: the king (Pierce Brosnan) is dictatorial, the queen (Minnie Driver) is frustrated, the princess (Tallulah Greive) studies public policy, and the fairy god-person (Billy Porter as Fab G) is flamboyant. Prince Robert (Nicholas Galitzine) barely has any attributes at all other than being handsome, singing nicely, and being crazy about Cinderella. It's supposed to be a running joke that he is referred to as "The King's Idiot Son." But it's kind of not wrong. Okay, maybe not an idiot, but kind of a spoiled slacker who is clear on what he's not interested in but not so clear on what he might be interested in.

Audiences may not notice all of that, though, because there's a lot going on, and most of it is very tuneful and colorful with some big, bright dance numbers. Hence the prediction about the five-year-old, and, I have to admit, the five-year-old that lives in all of us. The movie begins with a spirited opening number showing the villagers dancing to ... "Rhythm Nation." Yes, Janet Jackson's version of a new national anthem, calling for social justice, is just the thing for a vaguely 18th or 19th century village to sing as they get ready for the day. On the other hand, it's undeniably peppy and energetic, with lots of popular songs from the era of Gen Z's parents and grandparents, like "What a Man," "Shining Star," and "Seven Nation Army." But Queen's "Somebody to Love" is an unfortunate reminder that it was used better in "Ella Enchanted."

The musical numbers are much better than the dialogue, which is cutesy. Not once, but twice, we hear that the prince "still gets spanked on the tush-tush." Even Porter's snap cannot save his lines about the glass slippers not being comfortable.

Musical characters like to introduce themselves with an "I Want" song, and so we meet Cinderella, in her basement workshop, saving a caterpillar from a spider web and singing "You Gotta Be" by Des'ree. So, what does she want? To be bold, tough, wiser, and better, and for love to save the day. She is sweet, she is optimistic, and she is loved by mice, one of them voiced by producer James Corden. This is yet another reminder that one reason the producer should not be in the movie is that producers are not the best judge of whether they add value to the movie.

The frenetic silliness and uneven tone are unfortunate distractions from the genuine pleasures of the film, including Cabello's appealing performance as Cinderella, and the creative and energetic musical numbers. This Cinderella story should have asked Fab G for a make-under. 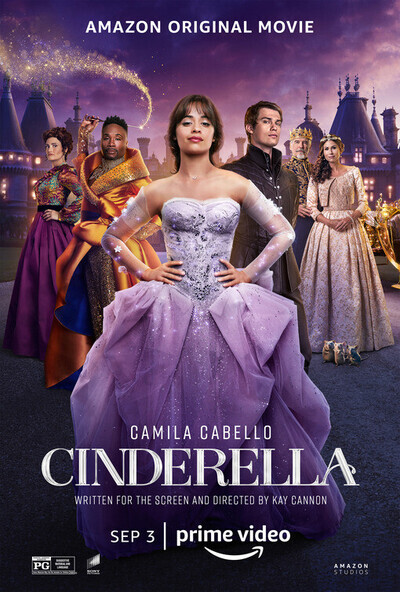 Pierce Brosnan as The King

James Acaster as The Mice / Footmen

James Corden as The Mice / Footmen