The presence of a new “Cinderella,” the latest of a long line of TV and theatrical movies about the fairy-tale lass (and one lad, if you count Jerry Lewis in 1960’s “Cinderfella”), caused me to realize that there seems to be a change in the attitudinal wind when it comes to popular entertainment.

The cynical side winks, knowing smirks, throwback references and dead-pan jokes that are hallmarks of post-modern culture are being ever so politely nudged aside by an emerging re-appreciation of old-fashioned sincerity and the pleasures of simply playing it straight.

One of the first signs of this turnabout might have been Tim Burton’s approach to last year’s “Big Eyes,” a biopic about Margaret Keane, the mid-century kitsch queen of the art world, and her struggle to regain credit for her work from her con-man husband.

Given the inherent creepiness of Keane’s waif portraits, many expected Burton’s humorously sinister sensibilities to seep into the beatnik-era clash of low art and high drama. But save for a couple “Twilight Zone”-style dream sequences, the filmmaker adhered to telling the true story pretty much as it happened and focused on building sympathy for its main subject.

This apparent sincerity revival went global when it arrived in the form of Lady Gaga’s Oscar-night performance of a medley of Rodgers and Hammerstein songs in honor of “The Sound of Music’s” 50th anniversary.

No one would blame anyone for expecting the pop singer, known for such outlandish stunts as donning a meat dress at an MTV awards show, to inject some ironic commentary about the sentimental classic into her performance. A bikini-wearing nun smeared with schnitzel with noodles would not have been out of the question.

Instead, Gaga materialized as a lilting vision of loveliness in a floaty lily-white frock and delivered near-perfect renditions of “The Sound of Music,” “My Favorite Things,” “Edelweiss” and a soaring “Climb Every Mountain” with an admirably unflinching reverence.

And the Twitter-verse, which has apparently replaced the Gallup Poll as a gauge of public opinion, exploded with thunderous approval.

Into this shifting atmosphere waltzes “Cinderella,” Disney’s dazzling live-action version of its 1950 animated classic. Other recent retellings of storybook favorites by the studio such as “Alice in Wonderland” and “Maleficent” reshaped the material for 21st century tastes, turning Lewis Carroll’s heroine into a pro-active warrior and upgrading the villainous fairy in “Sleeping Beauty” into a misunderstood victim. Even the recent “Into the Woods” featured a disillusioned Cinderella played by Anna Kendrick.

But director Kenneth Branagh, the Shakespearean actor who successfully launched the comic-book-inspired “Thor” franchise, eschews any such shadings in his story of the abused orphaned girl who wins the heart of a handsome prince. No dark themes or disturbing notions. No blatant attempts at inserting a mega dose of girlish empowerment or the slapping on of a feminist message. Besides, the “Frozen” phenom—the basis of the amusing spinoff short, “Frozen Fever,” that plays before “Cinderella”—has pretty much covered all those revisionist princess bases.

Instead of letting go of the essence of “Cinderella,” Branagh boldly chose to embrace every familiar detail of this romantic fantasy: the hearth cinders that give Ella her nickname; the pumpkin that turns into a carriage; Cinderella’s rodent best friends; and, of course, the glass slippers—courtesy of Swarovski. Meanwhile, those who have seen everyone from Brandy in the 1997 TV musical to Anne Hathaway in 2004’s “Ella Enchanted” attempt to step into Cinderella’s shoes might wonder why more liberties weren’t taken in this faithful iteration.

Yes, most of us will know exactly where this story is heading, which may lead to some tedium. However, after thinking it over, I realize that Branagh and company are probably making this version not just for us jaded adults but for a generation of children who perhaps never had a chance to see “Cinderella” on a big screen. For them, it will be a brand new adventure. And, because of that, many parents will appreciate this rather faithful retelling.

What is added mostly elevates the magic spell cast by this centuries-old legend. Whether it’s Dante Ferretti’s sumptuous production designs in refreshing spring-like hues or Sandy Powell’s eye-popping if anachronistic costumes, “Cinderella” offers an array of lavishly frosted eye pastry at every turn.

Most importantly, Branagh and writer Chris Weitz provide Cinderella, who had barely a wisp of a personality in Disney’s cartoon original, with a reason to put up with being reduced to an ill-treated servant in the cherished mansion she once shared with her late parents. She could obviously just run away. But instead she dutifully follows the upbeat mantra that her loving mother passed along to her: “Have courage and be kind.”

The handling of the heroine might prove to be the film’s most controversial detail. Some might find this Cinderella, whose belief in kindness is meant to be her super power and the key to overcoming those who stand in her way, a little too lacking in spunk and ambition. A goody-two-slippers, as it were. Yet her compassion for others is what makes her special and saves her from simply being a victim in need of rescue.

Casting makes a great deal of difference, too, and Branagh has recruited the winningly winsome British beauty Lily James to bring Cinderella to vivid life. As forward-thinking Lady Rose on TV’s “Downton Abbey," James has capably brought out the best in the sometimes headstrong though charming young woman who nonetheless can look out for herself. And the actress relies on some of that same female fortitude here as well.

As for her prince, Scottish actor Richard Madden (best known as Robb Stark on “Game of Thrones”) certainly has the dashing royal looks and boyish smile to pull off his part, despite having to don some unfortunate tight trousers.  One key addition to the story is that Cinderella and the prince meet cute—he pretends to be a palace apprentice named Kit—long before the fateful ball, which means they at least fall in love on second sight.

And one cannot say enough about the contributions of Blue Jasmine herself, Cate Blanchett, who slyly and subtly subverts the notion of the evil stepmother so the audience can summon at least some sympathy for this fabulous she-devil. Another plus: You can’t wait to see what gasp-inducing, gorgeous, ‘40s-style glamour-queen ensemble she will show up in next. Her Lady Tremaine is not just a fashion plate. She is a fashion platter.

Counteracting her lack of parental concern is an unexpectedly wonderful portrayal by the great Derek Jacobi as the ailing king, who provides this wise counsel to Madden’s prince: “You must not marry for advantage. You must marry for love.” As for Helena Bonham Carter as the slightly loopy Fairy Godmother—I mean, come on, who else could you possibly cast?

The biggest crinkles among all these tasty crumpets, however, are the portrayals of Cinderella’s stepsisters, Anastasia (Holliday Grainger) and Drisella (Sophie McShera). They are written as such annoyingly clueless ninnies that whatever comic relief they are supposed to provide too often falls flat—a problem not helped by the fact that McShera (a delight on “Downton Abbey” as kitchen maid Daisy) could do with some crisper diction.

Still, you can’t fault a family entertainment extravaganza too much if it actually goes out of its way to integrate the ensemble of a fairy tale in an Old World European setting with a diverse array of supporting players. Branagh deserves an extra bravo just for that. And we mean it sincerely. 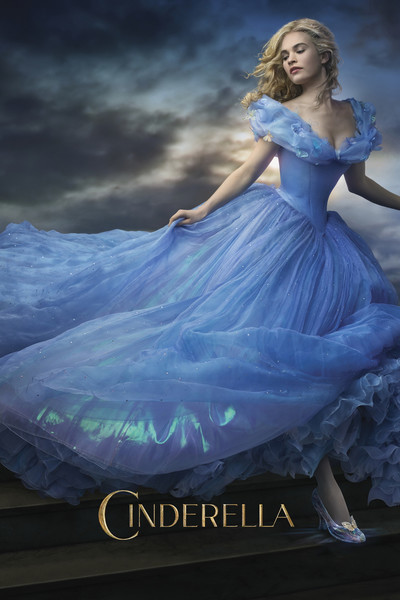 Derek Jacobi as The King