In the annals of historical biopics, Jonathan Teplitzsky’s “Churchill” stands out as a uniquely awful and tedious caricature of a fascinating subject. The film, which imagines British prime minister Winston S. Churchill as wracked with misgivings and opposing the Allied Forces’ D-Day invasion until the very last minute, strikes this reviewer as a load of utter rubbish from first frame to last.

Certainly, movies have the right to varying degrees of creative license and to interpret the characters and actions of historical figures. But the screenwriter of “Churchill,” Alex von Tunzelmann, a historian herself, has taken liberties that completely misrepresent the historical record.

Was Churchill opposed to an Allied invasion of northwestern France? He was, for various reasons—in 1942 and 1943. But by the time of D-Day in June of 1944, he was one of the plan’s chief architects and proponents. In her press notes for the film, von Tunzelmann says she “telescoped” the events of Churchill’s opposition, bringing them from months earlier to the days just before the invasion. That telescoping not only makes much of the story of “Churchill” ridiculous and unbelievable, it also renders Churchill himself a pathetic, doddering and deluded old fool.

The movie opens with Churchill (Brian Cox) walking on a beach and looking out at the waves, which begin to turn blood red as they roll in. Very subtle, no? The prime minister is of course gazing across to France and recalling the horrors of 30 years before. When he walks away from the waves, the image turns monochrome and the beach is littered with the bodies of World War I soldiers.

Churchill was indeed concerned about the amount of casualties an invasion of France might incur and had a vivid memory of the wholesale slaughter that the First World War visited on Europe. But “Churchill” wants us to believe that he was mentally trapped in the events of the past and thus virtually incapacitated as Britain’s leader. One doesn’t have to be a Churchill worshipper (I’m not) to recognize that this is sheer nonsense.

After Churchill’s visit to the bloody beach, he’s roused from a drunken sleep by an aide and taken to a meeting with Allied Forces Commander Dwight D. Eisenhower (John Slattery), Britain’s General Montgomery (Julian Wadham) and King George VI (James Purefoy). Here, just days before the D-Day invasion is to be launched, Churchill makes his fervent opposition to the plan known and thereby flabbergasts the others, throwing the high command of this enormous military operation into confused consternation.

Needless to say, this is completely absurd. That the D-Day invasion could have gotten off the ground—much less succeeded—with this kind of last-minute schoolboy squabbling at the top is worthy of a Monty Python send-up, not a movie that wants to be taken seriously.

From there on, “Churchill” is mostly a monotonous succession of scenes in which Churchill raves, waves his arms and shouts at anyone in his vicinity that D-Day mustn’t go forward. He has other ideas for an invasion. The Aegean! Norway! Eventually Montgomery gets fed up and blasts him for his “doubts, dithering and … treachery.” The latter word would be justified, if any of this were actually true.

The tale reaches a pinnacle of ludicrousness in a scene that suggests a grade-school parody of King Lear. After the invasion is delayed for a day due to bad weather, Churchill goes into his bedroom, gets on his knees, whirls his arms, and prays for more bad weather. “Please, please, please let pour tomorrow!” he bellows. “Let the sea churn in peaks and troughs and tidal waves!”

Poor Brian Cox is a fine actor but the most he can do here is jut his jaw out at a Churchillian angle and bellow when called upon. It’s debatable whether the appearance he gives of having a bad case of indigestion is a comment on Churchill or on the script. The film’s one grace note is Miranda Richardson as Churchill’s wife Clemmie; the actress brings a calm dignity to the part that stands in notable contrast to the overwrought histrionics and cartoonish characterizations surrounding her.

Actually, von Tunzelmann’s script has one aspect of genuine value: it could be taught in schools as an example of the mistakes that can be made in screenwriting, from the terrible dialogue and hackneyed characters to the trashing of interesting history.

Andrew Roberts, a prominent Churchill historian, wrote, “The only problem with the movie … is that it gets absolutely everything wrong. Never in the course of movie-making have so many specious errors been made in so long a movie by so few writers.”

It really is that bad. 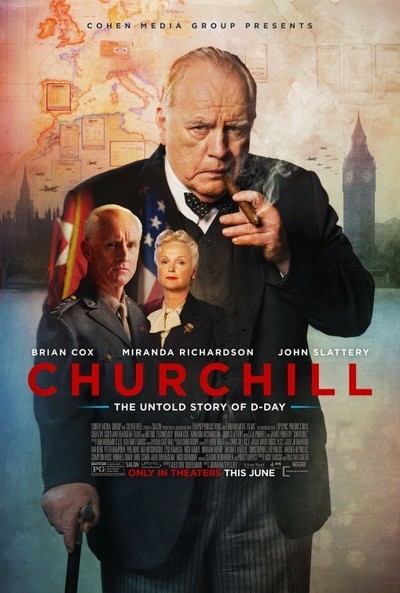