Roman Polanski’s “Chinatown” is not only a great entertainment, but something more, something I would have thought almost impossible: It’s a 1940s private-eye movie that doesn't depend on nostalgia or camp for its effect, but works because of the enduring strength of the genre itself. In some respects, this movie actually could have been made in the 1940s. It accepts its conventions and categories at face value and doesn't make them the object of satire or filter them through a modern sensibility, as Robert Altman did with “The Long Goodbye.” Here’s a private-eye movie in which all the traditions, romantic as they may seem, are left intact.

At its center, of course, is the eye himself: J.J. Gittes, moderately prosperous as a result of adultery investigations. He isn't the perenially broke loner like Philip Marlowe, inhabiting a shabby office and buying himself a drink out of the office bottle. He’s a successful investigator with a two-man staff, and he dresses well and is civilized and intelligent. He does, however, possess the two indispensable qualities necessary for any traditional private eye. He is deeply cynical about human nature, and he has a personal code and sticks to it.

There is also, of course, the woman, who comes to the private eye for help but does not quite reveal to him the full dimensions of her trouble. And there are the other inevitable ingredients of the well-crafted private-eye plot, as perfected by Raymond Chandler and Dashiell Hammett and practiced by Ross MacDonald. There’s the woman’s father, and the skeletons in their family closet, and the way that a crime taking place now has a way of leading back to a crime in the past.

These plots work best when they start out seeming impossibly complicated and then end up with watertight logic, and Robert Towne’s screenplay for “Chinatown” does that with consummate skill. But the whole movie is a tour de force; it’s a period movie, with all the right cars and clothes and props, but we forget that after the first ten minutes. We've become involved in the movie’s web of mystery, as we always were with the best private-eye stories, whether written or filmed. We care about these people and want to see what happens to them.

And yet, at the same time, Polanski is so sensitive to the ways in which 1930s' movies in this genre were made that we're almost watching a critical essay. Godard once said that the only way to review a movie is to make another movie, and maybe that’s what Polanski has done here. He’s made a perceptive, loving comment on a kind of movie and a time in the nation’s history that are both long past. “Chinatown” is almost a lesson on how to experience this kind of movie.

It’s also a triumph of acting, particularly by Jack Nicholson, who is one of the most interesting actors now working and who contributes one of his best performances. He inhabits the character of J.J. Gittes like a second skin; the possession is so total that there are scenes in the movie where we almost have telepathy; we know what he’s thinking, so he doesn't have to tell us. His loyalty is to the woman, but on several occasions, evidence turns up that seems to incriminate her. And then he must pull back, because his code will not admit clients who lie to him. Why he’s this way (indeed, even the fact that he’s this way) is communicated by Nicholson almost solely in the way he plays the character; dialogue isn't necessary to make the point.

The woman is Faye Dunaway, looking pale and neurotic and beautiful, and justifying for us (if not always for him) J.J.’s trust in her. And then there are all the other characters, who revolve around a complicated scheme to float a bond issue and build a dam to steal water from Los Angeles, in a time of drought. Because the film depends so much on the exquisite unraveling of its plot, it would be unfair to describe much more; one of its delights is in the way that dropped remarks and chance clues gradually build up the portrait of a crime.

And always at the center, there’s the Nicholson performance, given an eerie edge by the bandage he wears on his nose after it’s slit by a particularly slimy character played by Polanski himself. The bandage looks incongruous, we don't often see a bandaged nose on a movie private eye, but it’s the kind of incongruity that’s creepy and not funny. The film works similar ground: Drifting within sight of parody every so often, it saves itself by the seriousness of its character.

[Followed by a long-delayed sequel, “The Two Jakes,” in 1990, directed by Nicholson.] 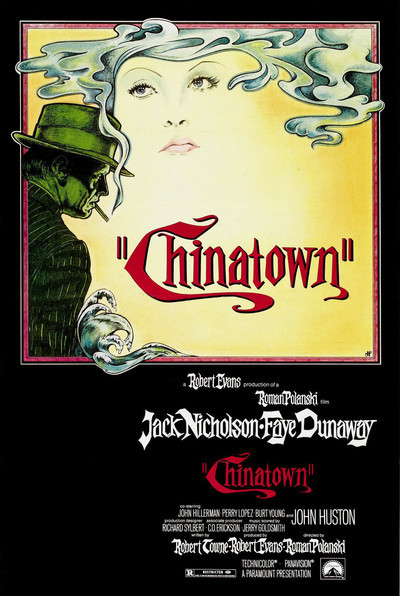 Roman Polanski as Man with Knife