On paper, "Chennai Express" is as safe a bet as blockbusters get: a director with a string of hits to his name (Rohit Shetty) working with two huge movie stars (Shahrukh Khan and Deepika Padukone) whose previous collaboration yielded commercial and critical success (2007's "Om Shanti Om"). Add romance, comedy, action, and adventure, and you should be all set. Although Hollywood has seen would-be blockbusters falter this year, most of those were either prohibitively expensive to begin with, in unpopular genres, or marketed poorly (if at all). "Chennai Express" would seem to have none of those issues, and the only business-related question remaining is whether it's going to be a big hit, or an enormous hit.

This leaves the movie itself, which could very easily be an afterthought in the wake of all its marketing heft, but isn't at all. It's just enough of a change of pace for Rohit Shetty to seem like a radical step forward without being so much of one as to be unrecognizable, as it's still funny and exciting, and the visuals pop. It should be noted as well that Shahrukh Khan, who's recently spent quite a bit of energy pretending that he's not pushing 50, directly addresses that issue in "Chennai Express," even letting Deepika Padukone spend a whole scene making fun of him for looking old.

Padukone got top billing in the movie due to Khan ceding it as a personal statement unrelated to this particular project.  She deserved it regardless. "Chennai Express" very quietly becomes her movie, before we even realize it's happening. The story begins with sheltered Mumbai sweet seller Rahul (Khan) agreeing to transport half of his grandfather's ashes to Rameshwaram, near the southernmost point of India (about as far away from Mumbai as one can get without leaving the country, in other words). After a series of comic mishaps, Rahul ends up trapped with a beautiful young Tamil lady named Meena (Padukone) and several large, unfriendly men in the employ of her powerful father, sent by him to bring her back home to marry a hulking brute. The twist here is that rather than Rahul discovering an inner heroism and saving the imperiled damsel from the fates that beset her, Meena spends the rest of the film bailing him out of mortal danger.

In a film mostly consisting of broad comedy and action setpieces, it's ironic that the most compelling element would be the subtlety of the heroine's string-pulling. To Padukone's credit as an actor, she's able to gracefully keep that element both omnipresent and nearly invisibly subtextual. Much of the overt action belongs to Shahrukh Khan, with his comedic fish-out-of-water flailing as Rahul. Of all the elements in his skill set, comedy has always been Khan's shakiest. He can be quite funny at times and catastrophically irritating at others (even in different iterations of the same joke, as is the case here).

However, if Khan can be relied on for any one thing, it's to deliver a Movie Star Moment when a film needs it most. He does that as dependably as any star in world cinema, and his skills are on display here as well. The way in which he delivers the goods at the end of "Chennai Express" is fascinating. It plays up the artificiality of movie star heroism and even undercuts traditionally codified masculinity and patriarchy, all while being, to all appearances, the very model of old fashioned cinematic and social values. And yet by the end of "Chennai Express," Shetty, Padukone, and Khan are all very clear that they regard Rahul and Meena as equals.

As notable as this dynamic is, it's still secondary to the blockbuster machinery of the rest of the film. "Chennai Express" is a romantic action adventure comedy, and it delivers the goods on all four counts. The only time it ever really goes off the rails—albeit briefly—is with some of the broader ethnic stereotyping of South Indians. While the cringe-inducing parts are brief, and Shetty does his best to invert stereotypes once he introduces them, it would be advisable to not engage in Northsplaining to offended South Indians why it's all really okay and they should lighten up. Ethnic humor is a delicate balance at the best of times. Delicacy is not always on display here.

Marred though it is by those moments, this is still an entertaining movie for the rest of its running time. Whether it's the wealth of meta-cinematic references to both Shetty's and Khan's other work, or the evolving romance between Khan and Padukone, or the handsomely mounted action, or the occasionally excellent songs, "Chennai Express" always has something up its sleeve. 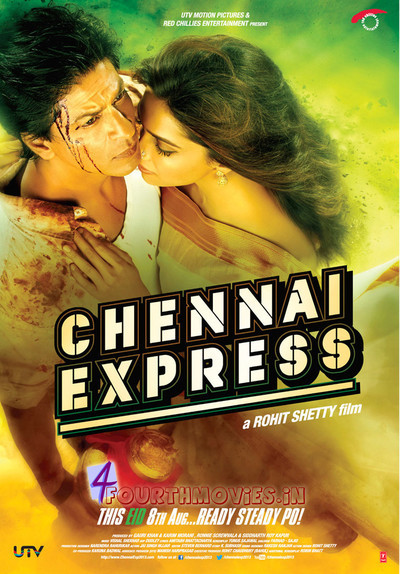