Angel Manuel Soto’s Sundance hit “Charm City Kings” has such a familiar coming-of-age arc that it’s self-aware enough to name-drop “The Karate Kid,” and probably knows that it has the DNA of a dozen or so other films of this type too. It almost ticks off all boxes for coming-of-age stories: a dead brother, a single mother, a new romantic interest, friends to leave behind/challenge, and even competing mentors from alternate sides of the track in a structure that almost directly recalls “A Bronx Tale.” Its abundance of plot contrivances in the final act and overly scripted dialogue hold it back from greatness, but two excellent performers overcome all of this familiarity. I can't want to see them again.

Jahi Di’Allo Winston (“Everybody Sucks”) gives a phenomenal, breakout performance as Mouse, a Baltimore kid who is pushed and pulled by the world around him. His single mother (Teyonah Parris) grieves the loss of Mouse’s older brother, but Mouse has reached that turning point when he’s not content to let mom or her officer friend Rivers (William Catlett) tell him what to do. He’s naturally drawn toward the dirt-bike riders who dominate the streets of Baltimore with their flash and edge, pushing the boundaries of the law in ways that would intrigue any kid looking for some excitement in his life. With his buddies Lamont (Donielle T. Hansley Jr.) and Sweartagawd (Kezii Curtis), they approach the bike club that gets all the attention, and Mouse finds himself being “Mr. Miyagi-ed” by a famous ex-con named Blax (Meek Mill, who brings authenticity to the bike club scene given his connection to the culture).

Blax helps Mouse work on bikes in his shop, teaching him about the culture and offering life lessons, even as Mouse is increasingly enticed by the more illegal activities of the club and what they could do for his life. The kid who was once interested in becoming a veterinarian turns away from working with animals to the quick cash promised by the club. As he also draws closer to a new girl on the block named Shay (Milan Ray), Mouse does what so many kids have a tendency to do: he matures too quickly. Before you know it, he’s saying things like “Boys wait for other people, men go out and get it,” forgetting that he is far from a man yet. “Charm City Kings” is another story of the difference between being boyhood and manhood, not just to everyone but also very specifically to this community in Baltimore, and, at its best, very specifically to a kid nicknamed Mouse.

The best parts of “Charm City Kings” pulse with emotional and physical energy, most of it courtesy of Winston and Meek Mill. Soto’s eye is still developing—although the film really pops in the bike scenes, especially a chase early on that makes me wonder if he shouldn’t do a pure action flick—but he really knows how to draw out the best in performers already, and he has a pair of stunners in these two. Winston gives one of the most heartfelt and powerful child performances I’ve seen in a very long time, making even the contrivances feel genuine and the emotional beats of the final act hit home. He pushes through the clichés of Sherman Payne’s script (from a story by Barry Jenkins) and finds emotional truth in places that more experienced actors would have completely missed. I’m going to quote our very own Nick Allen, who said last week in his review of another Sundance movie “Scare Me,” “tropes are like tracks for a roller coaster—it's a matter of how they're put to use.” Winston rides even the most familiar rails here with confidence and charisma. The kid is going to be a star.

If Winston’s performance hints at intense potential, the one from Meek Mill announces a performer who already owns the screen. He makes such smart choices, refusing to let the character become the stereotypical scenery-chewer he could've been in the wrong hands. It’s actually the most subtle performance in the film, capturing the history of a man who has seen it all not through dialogue but body language and nuance. He’s clearly groomed young men for the club before, which has resulted in tragedy at times, but he approaches Mouse differently, almost as if he’s finally wondering himself if he might be a negative influence.

Despite how much I think you should see “Charm City Kings” for Jahi Di’Allo Winston and Meek Mill, it’s impossible to get past all the tin dialogue (“Don’t give up on your dreams, Miles, because they don’t get no easier to hold onto”) and some of the decisions in the final act that feel like they exist purely to build a climax. Other than the kinetic bike scenes, it’s a film I enjoyed less for its plot than its minor beats, especially the ones with Mouse and Blax. They are two men of very different ages who recognize the crossroads at which Mouse stands, one in which every direction looks like the wrong way to go. 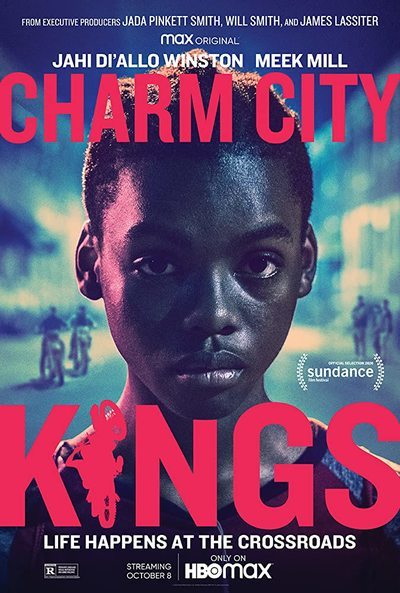 Rated R for pervasive language, sexual references and some violence.