It’s a dark and stormy night. Two cabin Airbnb neighbors, the struggling actor/writer/director Fred (Josh Ruben) and acclaimed novelist Fanny (Aya Cash), pass the time by challenging each other to tell a scary story. Except they don’t just sit across from one another as they spin yarns about werewolves and zombies, they act it all out. Their stories come from both thin air and their zeal for horror, expressed with verbose physical and emotional language. Tropes are encouraged, because horror fans know that tropes are like tracks for a roller coaster—it's a matter of how they're put to use.

Josh Ruben’s impressive directorial debut “Scare Me” gives us that roller coaster experience in a living room, basing his story about storytelling on the riches of vivid performances and winding, wicked tales (which are best left told by Fred and Fanny). Even if Ruben is a little thwarted by trying to make a larger point about this, the concept of these two telling a story is only deceptively cute. Coming from the mouths and minds of Cash and Ruben, it’s a full-blown acting showcase.

Of course, this film wouldn’t work without such engaging storytellers, and “Scare Me” has that with Cash and Ruben. From the start they have potent screwball chemistry in the way that Fred bumbles to impress someone he immediately finds alluring, only for Fanny to shoot him down with emasculating asides. She's more amused by his floundering approach, and prods him for entertainment, which he happily obliges by doing the first story.

In creating these two full, creative characters, Ruben gives them a strong adversarial edge. She’s the writer of the duo, coloring her stories with detail, while Fred comes at it from more of an actor's perspective, even thinking that calling her "Uta Hagen" is a diss (she doesn’t get the reference to the legendary acting coach). She calls out the misogyny in his stories and throws shade at him for being yet another white storyteller, making the movie itself self-aware, and self-conscious.

But irrespective of who everyone embodies—like how Chris Redd’s excitable pizza man Carlo pops up later to take on the role of excited spectator—it’s made possible by excellent performances, as Cash and Ruben can turn on a dime with their embodiments of reoccurring horror figures like a creepy old person, or a wolf. Exemplifying how acting is a form of storytelling, their work is transformative, animated, and hilarious. The face can do so much, and so can voices, and bent limbs, and Cash and Ruben prove to be inventive with these natural tools. You can practically see the different roles these actors could play in the future—Cash should be at the top of the casting roster for any project that needs a Romanian grandpa.

Even more than with scares, the largest energy in “Scare Me” comes from improv theater, as the stories have an outrageous, unpredictable edge. The filmmaking takes a more formal approach, presenting their make believe moments as if it were a movie, cutting between the different characters they’ve created as if Fred was playing multiple people at once, and often adding sound effects to make everything even more movie-like. It's a polarizing conceit, but it works with the editing that keeps these excited monologues zippy. All the while, the power outage that brings Fred and Fanny together is more than just a narrative device, as it makes for a fireplace that illuminates their micro production as if they were around a traditional campfire.

With all of the story’s meta aspects, I assume it’s no coincidence that Ruben casts himself as a writer who is accused of having an “idea” but not so much a full story, and is later berated by Fanny for telling a story that doesn’t have stakes. Like Fred’s undercooked albeit laugh-out-loud werewolf story draft, “Scare Me” has the same sense of feeling limited, especially when it tries to offer viewers something more than these conjured stories. But Ruben certainly makes things more interesting by sprinkling in some alarming character details about Fred throughout the night. And while the movie tends to lean more playful with its interpretation of its title, he even creates a genuinely uncomfortable scene toward the end.

“Scare Me” is a tricky film like that, showing the creative possibilities of its meta, bare bones approach to horror thrills, and sometimes feeling limited by it. And it’s hard not to overthink it, since the effect of storytelling is such a difficult experience to put into words. But the idea that we can look at someone in regular clothes and see a werewolf, and a whole setting, and someone else’s experience, is just part of the beguiling effect that has us constantly wanting to hear the next story. “Scare Me” has an inspired approach to honoring such magic. 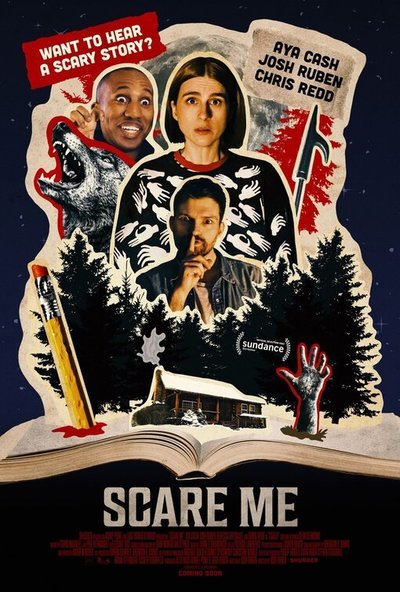