"Charlie's Angels" is eye candy for the blind. It's a movie without a brain in its three pretty little heads, which belong to Cameron Diaz, Drew Barrymore and Lucy Liu. This movie is a dead zone in their lives, and mine.

What is it? A satire? Of what? Of satires, I guess. It makes fun of movies that want to make fun of movies like this. It's an all-girl series of mindless action scenes. Its basic shot consists of Natalie, Dylan and Alex, the Angels, running desperately toward the camera before a huge explosion lifts them off their feet and hurls them through the air and smashes them against windshields and things--but they survive with injuries only to their makeup.

Why, I am asking, is this funny? I am thinking hard. So much money and effort was spent on these explosions that somebody must have been convinced they had a purpose, but I, try as I might, cannot see them as anything other than action without mind, purpose, humor, excitement or entertainment.

The movie's premise will be familiar to anyone who ever watched the original TV show. I never watched the show, and the plot was familiar even to me. A disembodied voice (John Forsythe) issues commands to the three babes who work for his detective agency, and they perform his missions while wearing clothes possibly found at the thrift shop across the street from Coyote Ugly.

Barrymore, Diaz and Liu represent redhead, blond and brunet respectively (or, as my colleague David Poland has pointed out, T, A and Hair). Sad, isn't it, that three such intelligent, charming and talented actresses could be reduced to their most prominent component parts? And voluntarily, too. At the tops of their careers, they chose to make this movie (Barrymore even produced it). They volunteered for what lesser talents are reduced to doing.

The cast also contains Bill Murray, who likes to appear unbilled in a lot of his movies and picked the wrong one to shelve that policy. He is winsome, cherubic and loopy, as usual, but the movie gives him nothing to push against. There's the curious feeling he's playing to himself. Sam Rockwell plays a kidnapped millionaire, Tim Curry plays a villain, and... why go on? In the months to come there will be several movies based on popular video games, including one about "Tomb Raiders" and its digital babe, Lara Croft.

"Charlie's Angels" is like the trailer for a video game movie, lacking only the video game, and the movie. 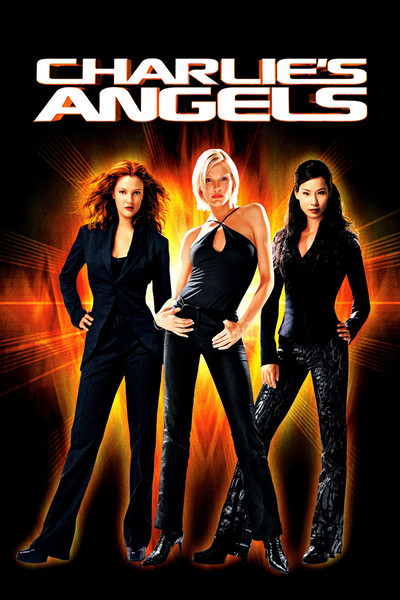 Rated PG-13 For Violence, Innuendo and Some Sensuality, Nudity

John Forsythe as Voice Of Charlie