"Cézanne et Moi" is at its most intoxicating whenever it looks and acts like a landscape painted by its title 19th-century French artist, whose evolving post-Impressionist style that was mostly dismissed during his lifetime would forever transform the way such 20th-century masters as Picasso and Matisse would see the world.

Cinematographer Jean-Marie Dreujou magnificently manages to engage every sense—not just sight but also sound, touch, scent and taste—as his camera absorbs the familiar Aix-en-Provence subjects of Cézanne’s canvases. There are the turquoise skies, chalky red-brown earth, delicately verdant leaves swaying on branches and, his favorite centerpiece, the muscular and majestic Montagne Sainte-Victoire. Somehow, you can smell the bright pools of paint on Cézanne’s palette; savor the fresh ripe tomatoes, slices of sausage and just-peeled garlic that sit nearby; feel the warmth of the sun; and sniff the freshness of the air.

But writer/director Danièle Thompson’s primary objective is not so much to imitate art but present a portrait of the extremely close yet often contentious relationship between Paul Cézanne and Nobel Prize-winning author Emile Zola. They first met as schoolboys and stayed in touch off and on until 1888, when Cézanne’s objection to being the inspiration for a tragic character in Zola’s “The Masterpiece” irreparably tore them apart. As Thompson’s script jumps between time periods, with cameo appearances by such renowned associates as Manet, Pissarro and Renoir, this historical drama primarily becomes a bushy-bearded bromance between two hugely gifted and ambitious men whose personalities were as polarized as those of Oscar and Felix in “The Odd Couple.”

Despite being a son of a well-off banker who disapproved of his vocational pursuits, the rough-hewn Cézanne (Guillaume Gallienne, fully capturing the wounded pride of a hard-working artist starved for the recognition that is enjoyed by his peers) is shown as a vulgar, opinionated and hot-headed bohemian with a substantial appetite for wine, women, food and the great outdoors while disdaining middle-class values and pretense. Meanwhile, fatherless Zola (Guillaume Canet, doing a fine job of conveying his writer’s inhibitions and doubts), who was raised under reduced circumstances by his widowed mother, embraces a more comfy bourgeois lifestyle thanks to his fame and fortune as a storyteller—as exhibited by his fashionable pince-nez eyewear, fancy pipe and natty suits—despite displaying a naturalist style of writing that exhibits empathy for society’s struggling underdogs.

Both male stars are fully believable in their roles, with Gallienne investing his less-refined recluse with outward bluster and inward discontent while Canet shades his introverted intellectual with quieter emotional hues. But “Cézanne et Moi” too often neglects to allow us to witness and understand the budding genius of these two towering figures—we only hear a few of Zola’s poetic passages being spoken aloud and see only a handful of Cézanne’s completed works—for what turns out to ultimately be a high-class soap opera. Obviously, Zola’s intellect and concern for the fate of mankind drove him to create his tales and the overwhelming beauty of his surroundings fed Cézanne’s need to develop a new way to envision nature. But we don’t really get to chart the development of their skills.

The mistresses, wives and maids are there to indulge the desires of these needy men, whether it is serving food, providing sex, acting as models, raising children or comforting their bruised egos. Only their own supportive mothers are pedestal-worthy. To increase the already palpable tension between the two rivals, much is made of how Zola’s controlling wife, Alexandrine (Alice Pol), was originally Cézanne’s lover. Still, Thompson can’t resist asserting her female perspective on occasion to allow the women to loudly express their displeasure at being taken for granted and rebuke the males for their behavior now and then.

In truth, it seems that Cézanne and Zola were each other's muses, forever wedded to one another, at least as they exist in Thompson’s ripe imagination. In good times and in bad, in sickness and in health, in anger and in affection, in failure and in selling out, theirs was a marriage born of inspiration and admiration. It’s not exactly Kirk Douglas as Van Gogh and Anthony Quinn in Gauguin in “Lust for Life,” but it’ll do. 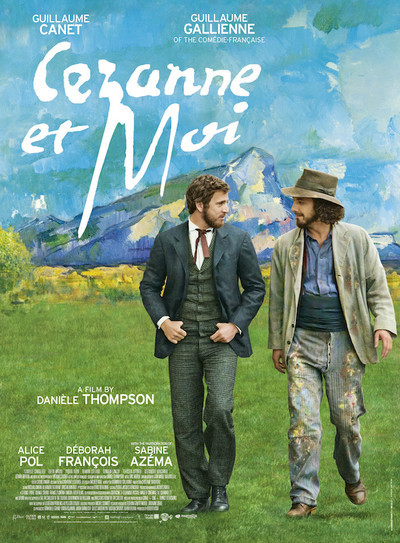