It also isn't authentic for a second, and it provides zero insight into the birth of the New York City punk scene in the 1970s. Director and co-writer Randall Miller's film doesn't have a shred of the energy or brashness of the pop-culture movement it depicts; sadly, it feels way too superficial and safe, two words you would never use in talking about punk rock itself.

For a film about one of the most legendary music venues in the country, if not the world, "CBGB" feels rather amateurish and small-scale. Too often, it offers a parade of famous people playing famous people in what amounts to a distracting game of dress-up: Look, there's Malin Akerman as Debbie Harry! Taylor Hawkins as Iggy Pop! And Joel David Moore as Joey Ramone! (Although the actor playing David Byrne, Jared Carter, does bear a striking resemblance to the Talking Heads lead singer.)

Sure, the clothes and the posturing may look familiar, but there's no soul—no human connection. But the worst part of all? The performances are lip-synched. And these are songs we've heard a million times before, so the fact that it's clear that the actors aren't actually performing them creates an even larger, unbreachable emotional distance. When The Police audition for club founder Hilly Kristal at the end of the film, for example, we hear those first few famous notes of "Roxanne" and it's obvious we're listening to the recording we've known and loved for decades, not something raw or real.

"CBGB" the feature film makes you long for "CBGB," the documentary. Because the music featured here is indeed great, intrinsically tied as it is to a daring, thrilling time in American culture.

Instead, Miller and co-writer Jody Savin (his wife and frequent collaborator) try to convey a sense of energy and forward momentum by staging parts of the film as if they were springing to life from comic-book panels. Exclamations of "Slam!" and "Buzz!" accompany the construction as twice-bankrupt would-be impresario Kristal (Alan Rickman) turns a Bowery dive bar into the club that becomes CBGB. It's meant to serve as a connection to Punk Magazine—to show what a force the publication was in defining a musical phenomenon—but instead plays like a cheesy gimmick, and further underscores the artificiality of what we're watching.

Kristal, meanwhile, is supposed to be a force of nature himself, depicted in a flashback to his infancy climbing out of his crib at his family's New Jersey chicken farm and running down the street in the middle of the night. As an adult, though, he sort of shuffles between derelicts and musicians, arguments with his daughter (Ashley Greene doing a thoroughly unconvincing New York accent) and negotiations with the local biker gang. Rickman can be a formidable actor, as we well know – and in his scenes opposite Rupert Grint as a member of the Dead Boys, we get an amusing little "Harry Potter" reunion between Professor Snape and Ron Weasley. But he's oddly drab and doughy here, and with his mop of curly hair, scruffy beard and gut, he distractingly resembles stand-up comic Jeffrey Ross.

"CBGB" depicts the rise not only of punk rock but also of the dingy club that birthed so many important bands. Kristal initially envisioned it as a venue for country, bluegrass and blues – hence the abbreviation – but seemed content to discover the acts he did. But as word of the place got out and fans crammed inside, Kristal still never had any money because he was always giving away free drinks.

Why? Who knows. We get very little sense of who he was as a man (Kristal died in 2007), what drove him and what inspired him to persevere during tough times on this back-lot version of the Lower East Side.

A glimpse of footage during the closing credits shows the members of Talking Heads thanking Kristal for his early support during their induction into the Rock and Roll Hall of Fame. That moment, with its warm sense of kindness and collaboration, is more enlightening—and more human—than anything that preceded it. 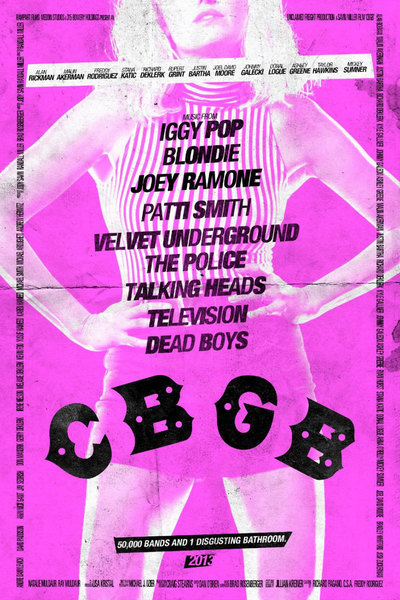