“Fish been very good to me,” says Joe, early in “Caught.” He runs a fish market in Jersey City and has a proud policy: “Any customer finds a bone, I give them their money back, plus a quarter.” Joe's life is full because he loves fish (“Fish are his life,” his wife says, with an irony that Joe doesn't pick up on). This looks like the setup for a story of proletarian bliss, but in fact “Caught” is the most carnal of recent movies, a film that reminds us how movies used to take sex seriously, instead of using it as an excuse for muscular choreography.

For many years Joe (Edward James Olmos) and his wife Betty (Maria Conchita Alonso) have run their fish store on a street of other small shops.

Their marriage would be perfect if only Joe liked sex more, and Betty liked fish more. Their only son, Danny (Steven Schub), has moved to Hollywood to seek work as a standup comic, and sends back videos of his act, which seems like the rantings of a dangerous lunatic, although his mother proudly calls him “the next Robin Williams.” Into their shop one day steps a young man on the run from the police.

His name is Nick (Arie Verveen), and he's not a criminal, just a kid down on his luck. Joe and Betty take pity on him, invite him home for dinner, and eventually offer him a job. The pay isn't great but the deal includes room and board, and Nick is given Danny's old room in the cramped flat where the family lives.

In a sense, Nick is the son Joe and Betty wanted and deserved. The absent Danny is a drugged-out creep who lies “my agent has Letterman and `Saturday Night Live' fighting over me.” But Nick is grateful, friendly, learns fast, and loves the same things Joe and Betty love: Fish, and sex. With fish it is a slower process, but Joe teaches him patiently, and soon he can bone a chubb in under five minutes, which is “the mark of a fish man.” Sharing the same cramped space with Betty, Nick becomes aware of her as a woman. This is a remarkably easy thing to do when Betty is played by Maria Conchita Alonso, one of the rare actresses who seems to think sex is an occasion to laugh and be grateful--instead of a grim showdown with Darwinian management and marketing overtones. Because both Betty and Nick care for Joe, they do not want to cheat, but a deep current of passion grows between them, and after their first illicit lovemaking they become helpless in the face of their obsession, snatching stolen moments while in constant danger of being discovered by Joe.

One of the things that makes “Caught” intriguing is that we don't want them to be discovered--because we care for Joe. As played by Olmos, he is a good man, a little too single-minded, who does not deserve to be hurt. Nick and Betty know this, too. “I wish we could tell him--show him--so he could see how wonderful it is,” Betty says.

The situation reaches a crisis when the obnoxious Danny returns from Los Angeles with his wife and child. Despite his boasts, he has no prospects and a dim future; he uses a lot of dope and focuses on cruel one-liners, a lot of them aimed at Nick. It takes Danny little time to figure out what's going on between his mother and the new shop assistant, and there is a shocking moment at a picnic when he tricks his mother, who uses her toes to caress her son's leg under the table, thinking it is Nick's.

“Caught” is not the kind of movie we ordinarily expect from Robert M. Young, a director whose films run toward political themes with progressive overtones (his credits include “The Ballad of Gregorio Cortez,” “Short Eyes,” “Dominick and Eugene” and “Triumph of the Spirit”). It's more classic in its undertones; we are reminded of Oedipus. But there is a special twist to the story, since the villain is the real son, while the symbolic son is more the victim of the irresistible attraction that grows up between himself and Betty, and the father is an innocent bystander. These confused lines of affection and loyalty make for an explosive and complicated crisis which is surprising in its form and its shocking outcome.

Watching the movie has the fascination of watching a traffic accident; we know there is going to be a crash, cannot stop it, and cannot look away. But Young and his actors are able to lead us to the crash through a process that makes us care about the people it happens to. And they are fearless in showing us the consequences of uncontrolled lust.

When I think of sex in recent movies, I think of a joyless, calculated display of commercialized images, as in such movies as “Striptease,” “Showgirls” and all of those yuppie dramas where men are destroyed by mantis-like female executives. “Caught” is a throwback to a time when the movies thought about sex more simply, as something that people wanted so much that sometimes it overwhelmed their better senses. And that strong elemental power, coursing under the surface of the story, gives it a strength that elevates melodrama almost to tragedy. 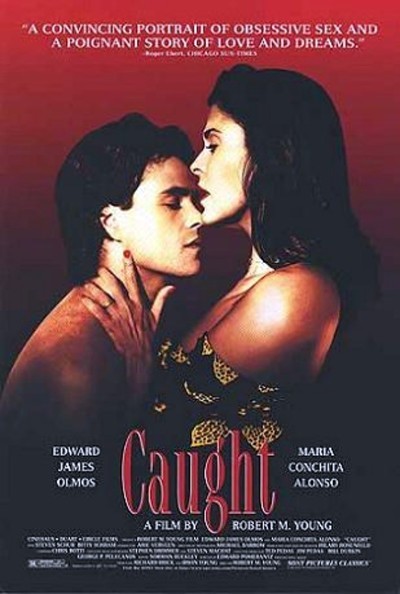