Anthony DiBlasi's "Cassadaga" is the state of the art in horror movie storytelling, and the state of the art is horrendous. I almost feel like defending this film against inevitably harsh criticism. Like Tony Montana or Michael Corleone pointing a finger back at government gangsters, this film's creators could make the case that nearly every contemporary horror film looks, moves and sounds like this one. "Cassadaga" didn't start the fire; it's been burning since the first "Saw" movie, which found that lavish torture scenes could replace suspense and that endless amateur psychoanalysis of deviant behavior could trump emotional investment. All such films could have been written and directed by the shrink who explains "Psycho" in its final minutes. Yet this one is especially obsessed with grisly details that contribute nothing to our fear or excitement.

"Cassadaga" starts with a kid as messed up as Norman Bates, a boy who dresses in drag and mutilates himself in a way that the musical score gently reminds us is terrible, at "Inception" decibel levels. Then it gets another story going, about a deaf teacher grieving the accidental death of her sister while discovering her own psychic powers. Eventually, the two threads will converge. The messed up kid, all grown up now, will have the pretty teacher tied up in a basement, where she almost escapes, crawling on the dingy stone floor in a nightgown. Everything that you expect to happen happens, and it all takes close to two hours to unfold.

DiBlasi isn't a horror director. I hope he gets to read this: His true gift, based on what I've seen in "Cassadaga", is for some kind of personal, observant story between a man and a woman. The only moments in the film that quickened my pulse were between the schoolteacher (Kelen Coleman) and the divorced father of her favorite student (Kevin Alejandro). From the moment they meet, the chemistry is powerful, and suddenly DiBlasi has a sense of pacing, restraint and even a pinch of wonder.

The arc of their sweet, nervous courtship kept me invested right up to the moment where, as mandated by Bruce Wood and Scott Poiley's flabby screenplay, Di Blasi must interrupt the reverie with a serial killer plot, psychic freakouts, three bloody-maggot scenes, a marionette-style metal armature torture contraption, ominous lurking, lurching figures and about 12,000 ineffectual jump-scares. In hope that we still give a damn in the midst of all this ruckus, the film inserts a few hugs, cries and earnest vows of devotion.

On the other hand, DiBlasi could be a horror director. It slanders the genre to imply that this script's emphasis on meaningless events and empty shock effects is what horror requires. If the filmmaker had simply cleared out the clutter and treated what was left with the delicate concern for character that makes the courtship scenes pop, "Cassadaga" could have been an exemplary horror film. The ambition is evident in how slowly and meticulously each scene plays out. Some things deserve a lingering gaze and some don't. "Cassadaga" acts like it's all vitally important. A dude in a bloody apron and welder's helmet amputating female joggers and masturbating feverishly: how long would you prefer to stare at something like that? 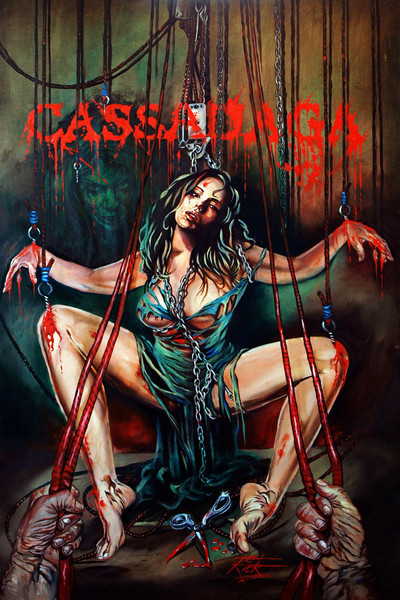