Director Nia DaCosta’s “Candyman” is being sold as a “spiritual sequel” to the 1992 horror classic starring Virginia Madsen and Vanessa Williams. This iteration ignores the two actual sequels to writer/director Bernard Rose’s adaptation of a Clive Barker short story, instead picking up in present day Chicago. The Cabrini Green where Madsen’s Helen Lyle character met her grisly fate is no more; the towers have been torn down and the area’s being gentrified within an inch of its life. Had Lyle survived, she’d probably be living in a place like that of artist Anthony McCoy (Yahya Abdul-Mateen II). “White people built the ghetto,” says his girlfriend, Brianna (Teyonah Parris) to her brother, Troy (Nathan Stewart-Jarrett), “and then erased it when they realized they built the ghetto.” This is not the last we’ll hear about gentrification.

It’s Troy who brings new viewers up to speed, spinning the first film’s tragic story for his captive audience after warning them that where they live is haunted. “This is too much, even for you,” says his husband, Grady (Kyle Kaminsky) about the part featuring the decapitated Rottweiler. This sequence is done with the same type of shadow puppets used for “Candyman”’s teaser trailer. That effective short highlighted one of the major themes DaCosta and her co-writers Jordan Peele and Win Rosenfeld put into their script: the endless cycle of violence perpetrated on Black bodies by White supremacy and the system it created. This idea was baked into the 1992 version’s tale of Daniel Robitaille (Tony Todd), the original Candyman, but the focus was primarily on the White protagonist’s fate.

With Abdul-Mateen and Parris as the leads, the filmmakers are free to dig deeper into the legend and its parallels to the here and now. Their proxy is William (Colman Domingo), an old-timer we first see as a child puppeteer in 1977. He meets Anthony just after the latter hilariously jumps into the shadows to avoid a passing cop car. “Are they keeping us safe,” William asks, “or keeping us in?” Alluding to the press Helen Lyle received while numerous Black victims of Candyman remain unknown, William says “one White woman dies and the story lives forever.” This dovetails nicely with the Candyman legend—here’s an entity whose immortality can only be realized by having his name (and by extension, the memory of his tragedy) spoken into existence. The mirror element, a holdover from the old Bloody Mary urban legend, is a nice touch rife with symbolism. What do the victims see of themselves reflected before they literally get the hook?

Despite his disbelief in Troy’s story, Anthony is inspired to look into the history of his neighborhood in the hopes it will inspire some new paintings he can show at a gallery run by Clive Privler (Brian King). William provides an additional Candyman story based on his childhood run-in with a strange local man with a hook for a hand. Like Daniel Robitaille, he was brutally murdered by a mob of what passes for the law, then posthumously “cleared” of the crimes he was accused of committing. “Candyman” proposes that its monster lives on, imprisoned in his agony because this particular history keeps repeating itself. I was reminded of Oprah’s line in “Beloved,” where she says of the spirit haunting her house that “it ain’t evil. Just sad.” “Candyman isn’t a he,” William tells Anthony before warning him to stay away, “he’s the whole damn hive.”

“Dare to say his name” is this film’s tagline, intentionally echoing the rallying cry of the current movement against undue and lethal law enforcement. Horror has always been a conduit for this type of allegory, tucking that which we’re not supposed to discuss underneath the viscera and the unreality. “Candyman” acknowledges that the real world can be even more dangerous and horrifying than the supernatural. So, every time a character utters “say his name,” it immediately conjures up the emotional pain of the intended coincidence.

A more physical pain, however, awaits anyone foolish enough to say a specific name five times in a mirror. There’s a running joke about people not wanting to tempt fate by testing the urban legend. Thankfully, there are plenty of folks who have no such restrictions. One unfortunate couple learns that testing out urban legends does not make for good foreplay. And it doesn’t go unnoticed that minority characters tend to bypass certain doom by not succumbing to certain horror tropes. Brianna’s response to the idea of going down a dark basement staircase provides the film’s biggest laugh.

“Candyman” caters to fans of the original without sacrificing its own vision and story. Virginia Madsen briefly cameos (though not onscreen), as does Vanessa Williams, both in their original roles. I wouldn’t dare spoil the reasons for the latter, but the revelation shows just how well this tale is constructed. The rest of the cast give fine performances, with Abdul-Mateen standing out in an often difficult role. The actors also convince us of their relationships in a short amount of time, and it’s not just the one between Anthony and Brianna. Kaminsky and Stewart-Jarrett create an equally strong connection between their characters in a few scenes. Troy’s bond with his sister feels comfortably lived-in with its playful ribbing and genuine concern.

Jordan Peele has become the master of balancing the hard truths of being Black and brown in this country with a devilish predilection for goosing the audience the way good horror movies do. You can almost imagine that it was his idea to begin the film with Sammy Davis, Jr.’s cover of “The Candy Man” playing over backwards versions of the Universal and MGM logos. DaCosta’s visual style is a willing accomplice, as is the absolutely disgusting sound mix. She stages the kill scenes with a mix of pitch-black humor, misdirection, and clever framing, fully acknowledging that what you don’t see—or think you saw—can be a lot worse than what you did see. One well-staged murder scene takes place in a very wide shot as the camera pulls away, giving us the view of someone escaping just as the carnage occurs. Toss in some profoundly gross body horror plus a satisfying ending that nicely closes out its thesis statement, and we have the makings of a fun, thought-provoking time at the movies.

Only in theaters on August 26th. 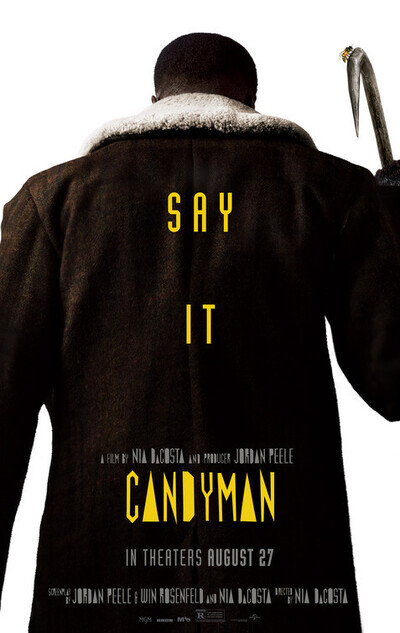