"Madhouses are houses made on purpose to cause suffering…I cannot stand any longer the screams of these creatures."—Camille Claudel in a letter to her brother Paul

Cinema can be one of the most empathetic of arts. When done well, its immediacy, its sense of experiencing another life (fictional or not) can bring about an expansion of understanding, an overwhelming telescoping of consciousness. "Camille Claudel 1915", the latest by French director Bruno Dumont, is that kind of cinema. It tells the story of three days in the life of Camille Claudel, gifted sculptor and one-time protege and lover of Auguste Rodin. Claudel was committed to an asylum in 1913 by her brother, poet/diplomat Paul Claudel, following the death of their father (a man who had always been in her corner). Dumont uses only Claudel's medical records and the letters that Claudel and her brother wrote to one another, as the material for his script. The result is a story pared down to a bone-white gleam, a grim portrait of monotony and silence broken by unrelieved despair, and an almost suffocating sense of claustrophobia and entrapment. It's a harrowing film, made even more so by the raw performance of Juliette Binoche as Camille Claudel. By the end, you are left with a feeling of helplessness, rage, and a kind of abstracted bafflement. How did this happen? You want to intervene (the key sign of a classic tragedy). All credit to Dumont and Binoche here, who approach their difficult subject without blinking.

Camille Claudel was the rarest of creatures: an artist celebrated in her own time (and a female artist, no less), but after the dissolution of her relationship with Rodin she began to fall apart. She lived as a recluse in her Paris studio, still sculpting (some of her best work comes from this period), but more often than not going on rampages where she smashed everything she had created. Her paranoia was acute. She felt persecuted by Rodin, and regarded him as an omniscient, sinister creature. The reality, of course, was more complex. Rodin had recognized her genius, had brought her under his wing, and looked at her work with admiration and awe. Years after their affair ended, Rodin said of Claudel, "I told her where to find the gold. But the gold she mined was her own." On his death bed in 1917, he asked for his wife, and when his actual wife was brought to him, he murmured, "No, no, the other one," meaning Camille. Camille Claudel would not have been comforted to know this. All of this ground was covered in sweeping melodramatic detail in Bruno Nuytten's 1988 biopic, with Gerard Depardieu as Rodin and Isabelle Adjani as Camille, in an Oscar-nominated performance. That film ends with Camille entering the asylum. Camille Claudel would live for 30 years in confinement. She died in 1943.

In 1915, the year Dumont's film takes place, Camille still had hope that she would be released. Even the doctors at the asylum did not think it was appropriate that she be locked up. She was clearly much less sick than the other inmates. Filmed in an actual asylum in France, using the actual residents of the asylum as the supporting cast (a choice that may be seen as sketchy, and yet is effective in the result), the interiors are cold and almost grand. Dumont often uses non-professionals in his films, and the nurses and doctors in "Camille Claudel 1915" are played by the actual staff at the current-day asylum. They help ground the film, and, conversely, they help highlight the unfairness of Claudel's incarceration. It is so obvious that she does not belong there. The paths around the asylum are all gravel, and the sound of feet crunching on rocks fills the film, jarringly. It brings up images of Claudel's smashed sculptures back in her abandoned studio in Paris. The film has almost a scientific exactitude: Here, look, see, here is what she ate, here is what her room looked like, here is the orchard, here are the hallways. There is no music in the film, nothing to distract from Camille's reality, and nothing to sentimentalize or underline the emotions. Camille herself rarely speaks, and when she does, in a visit with the resident doctor, her words pour out of her in a devastated flood of betrayal and desperation. She begs to be released.

"Camille Claudel 1915" opens with a shot of Binoche, from behind, standing in a hallway, hair wild and uncombed, as two nurses convince her soothingly that it will feel good to take a bath. The next thing we see is Binoche, naked, being thrust into a bath, surrounded by nurses, with other patients standing against the wall waiting their turn. Binoche's face, in our first glimpse of her, is shocking in the frayed sense of pain it reveals, the humiliation of being naked in front of other people. The invasion of privacy is treated casually and brutally. In one of her letters to her brother, she wrote, "I would so like to go home and close the door tightly." Closing a door is the height of personal autonomy. In the asylum, doors are always open and solitude is always interrupted. Silence is pierced by moans and wails from other patients. Camille is given some privileges in the asylum (of course depending on her good behavior). She is convinced that someone is going to poison her food so she is allowed to cook her own meals. She boils a potato, and then takes it out into the garden, chomping on it like an apple.

Jean-Luc Vincent plays Camille's brother Paul, who does not enter the film until more than halfway through. The shift to Paul's point-of-view is strange, since everything up until then is seen through Camille's eyes, but it serves a dramatic purpose. Paul is a poet and playwright, a diplomat, a Roman Catholic, a former devotee of Arthur Rimbaud. He has a mystic sense of connection with God, and kneels by the side of the road during his journey to visit his mad sister, praying right into the camera with a fanaticism that strikes a chord of uneasiness in the viewer. We have been looking forward to his visit, because Camille herself is living for it. It would be a simple thing for Paul to sign her release. We know that that's not how the story went, but we still hope for it. But once we spend five minutes with Paul, we understand that Camille is on her own.

Juliette Binoche gives yet another astonishing performance in a career of great performances. Binoche does not strain for effect, and she never has. Her acting talent is fluid, flexible, and accessible. Acting is the ability to play make believe with the same devotion that you did as a child. Binoche has that. You don't catch her calculating or creating. She simply seems to "be". When the doctor approaches Camille in the hallway and informs her that her brother will be visiting, Binoche, who a moment before had been dull and lethargic, bursts into laughter and tears in the same electric moment. It is impossible to watch Binoche in this performance (which is mostly silent, except for that one impassioned monologue in the doctor's office) and not be moved to the core. You can actually see Camille Claudel being erased. And Camille was aware of it as it was happening.

In 1935, after being in the asylum for 20 years, Camille Claudel wrote to a friend, "I live in a world that is so curious, so strange. Of the dream which was my life, this is the nightmare." What Bruno Dumont and Juliette Binoche accomplish in "Camille Claudel 1915" is to present the reality of that nightmare on a day-to-day level. The risk is that it will be boring, and indeed sometimes the film is boring. But a kind of miraculous thing starts to occur through that very monotony, and it has to do with empathy. If three days could be this upsetting, then imagine 30 years of such days. The mind resists. And that is the point. If Camille Claudel could bear it for 30 years, then surely we can bear it for 94 minutes. Surely we owe her that. 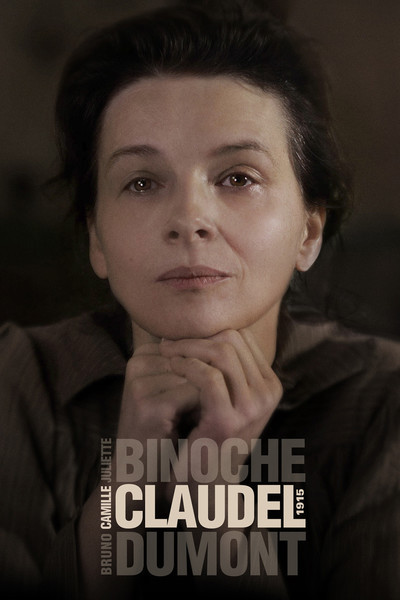