"Brubaker" is a grim and depressing drama about prison outrages - a movie that should, given its absolutely realistic vision, have kept us involved from beginning to end. That it doesn't is the result, I think, of a deliberate but unwise decision to focus on the issues involved in the story, instead of on the characters.

All the people in this movie have roles that represent something; there's the Idealistic Reformer, the Pragmatic Politician, the Corrupt Administrator, the Noble Prisoner, the Tough Guard. The problem is that once they're assigned an ideological niche at the beginning of the movie, they behave with absolute consistency. There's no room for the spontaneity of real human personalities caught in real situations.

That's especially annoying with the character of Brubaker himself, played well but within a frustratingly narrow range by Robert Redford. Brubaker is the reform warden assigned to clean up the violence and corruption of Wakefield Prison Farm, a hellhole of sadism where no guards are needed because the prisoner trusties are armed and get time off their sentences for shooting escapees. The movie's first 20 or 30 minutes, which are sickeningly effective, document conditions in the prison, where the commonplaces include beatings, bribery, rape and slum living conditions.

Brubaker finds out about these outrages firsthand. He has himself been brought into the prison anonymously, as a prisoner. This is supposed to provide the movie's biggest surprise, when he finally steps forward and identifies himself, but all the ads for the movie spoil the surprise by identifying Redford as the warden.

What seems a little unlikely in these opening scenes is that Redford, as a new prisoner, would emerge unscathed: He observes, he listens and he's mostly left alone by the other prisoners, even though his fellow new recruits are being raped, beaten and forced into the prison's system of corruption.

After Redford takes charge, the movie disintegrates into predictability. He takes a position in favor of progressive reforms, and the state board of corrections takes a position in favor of corrupt business as usual. Some interesting characters, are introduced, especially Yaphet Kotto as a hard-boiled trusty who can't make up his mind about the warden, and Jane Alexander, as a pragmatic aide to the state governor. Murray Hamilton, as a corrupt member of the state prison board, does his usual venal capitalist and does it well, but he has played this role so frequently (in the two "Jaws" movies, for example), that he must know it by heart.

In the meantime, we're growing a little restless because of the movie's refusal to permit its characters more human dimensions. We want to know these people better, but the screenplay throws up a wall; they act according to the ideological positions assigned to them in the screenplay, and that's that.

Half of Redford's speeches could have come out of newspaper editorials, but we never find out much about him, What's his background? Was he ever married? Is this his first prison job? What's his relationship with the Jane Alexander character, who seems to have gotten him this job? (Alexander has one almost subliminal moment when she fans her neck and looks at Redford and, seems to be thinking unpolitical thoughts, but the movie hurries on.) "Brubaker" is a well-crafted film that does a harrowingly effective job of portraying the details of its prison, but then it populates it with positions rather than people. 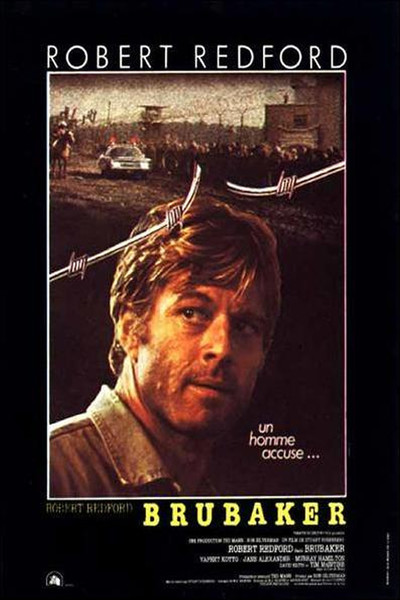