Once you get over the icky feeling that making a movie about Brexit in early 2019 is kind of like making a movie about a raging wildfire before it’s been put out, HBO’s “Brexit” is an interesting examination of how we got here. How was a nation of people convinced that doing something as drastic as leaving the EU was in their best interests? Employing the same kind of quick-cut, explanatory style that Adam McKay uses in films like “The Big Short” and “Vice,” Toby Haynes centers the story of Brexit on the big brain of Dominic Cummings, played with clever aplomb by one of the kings of clever aplomb, Benedict Cumberbatch. Bringing a heavy dose of his Sherlock character to this behind-the-scenes mastermind of the Vote Leave campaign, Cumberbatch portrays Cummings as something of a political anarchist, someone who wanted to hack the political system and see what would come out of the chaos. And viewers are likely to draw the line between the way he weaponized fear and racism to the 2016 U.S. election of Donald Trump before the movie literally does so itself.

With its editing style and to-camera narration, “Brexit” speeds through the tactics of the Vote Leave and Remain campaigns, the former headed by Cummings and the latter by Craig Oliver (an excellent Rory Kinnear), the director of communications for Prime Minister David Cameron. The film sticks to the timeline of summer 2015 to summer 2016 as Cummings assembled his team and strategies, striking true oil when he realized that changing technology could allow him to access the disenfranchised through social media in ways that had never even been attempted before. This wasn’t just targeted advertising, it was data mining (Cambridge Analytica plays a role), and Cummings used that data to come up with a campaign that played on people’s fears while promising them a better future. The Vote Leave slogan—“Take Back Control”—implied that leaving the EU wasn’t a drastic change but a reversion to a better time. Discuss how that slogan worked in a similar way to “Make America Great Again” among yourselves.

What “Brexit” deftly captures is how Cummings sensed a growing majority of disappointment in his own country before the opposition knew how to bring those people back to their side. The script by James Graham literally compares it to oil pockets of energy just waiting to be released—the energy of people who felt like they didn’t have control over their own lives and that leaving the EU would return that lost control to them. There’s a phenomenal focus group scene in which a woman who supports Leave is accused of racism and she breaks down over how she feels like she literally has nothing left to lose. The idea that people can become so disenfranchised in their lives that they support anything that might shake it up has led political revolutions for decades, but people like Cummings and Trump found new ways to use modern technology and rhetoric to galvanize these people into action.

Despite all the things that work about “Brexit,” there is sometimes the sense that this is a story half-told. With the Brexit drama still unfolding, one wonders if they shouldn’t have waited a year or two to discern how upcoming developments were influenced by what Cummings accomplished back in 2016. Historical dramas typically work better with a little more distance from the history they're dramatizing.

And there are times when the McKay-esque style works against “Brexit,” making it feel flashier than it needed to be. I found “Brexit” most interesting in its calmer beats such as the aforementioned focus group scene and a great one late in the film as Cummings and Oliver get a drink and hash out how their country got here. It’s a complex moment in which Cummings persuasively argues that the powers that be that Oliver represents didn’t understand their own constituents and basically took them for granted. Whatever comes of Brexit and Trump, not taking entire groups of people’s needs and worries for granted is a mistake that politicians are unlikely to make as easily in the future. We can hope. 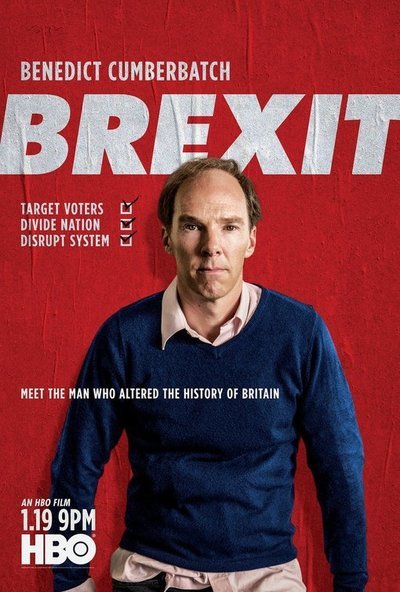