The key figure in the film is Dr. Nof Atamna-Ismaeel, a cheerfully genial microbiologist who, in 2014, became the first Muslim-Arab to win Israel’s “MasterChef” competition. Having herself grown up in an Arab town while attending a Jewish school, she learned to embrace the similarities between the two cultures instead of the tensions. Using the platform she achieved through her win, she created a food festival in which the items on display would be rare dishes prepared by teams of Arab and Jewish chefs. Even the location selected to hold the festival, Haifa, is chosen for how it has also brought the two cultures together as well with its own theological balance.

Over the course of the film, we meet several of the participants, learn their individual stories, and watch as they come together in the kitchen with the shared purpose of preparing food. Whatever initial trepidations they may feel are quickly swept aside as they discover a shared purpose in their love of making food, a practice that crosses all physical and ideological borders. Of course, there are moments when even something as simple and straightforward as making food can be tainted with conflict, most notably when Atamna-Ismaeel talks about how the meal known as “Israeli salad” is actually Arabic in origin and has therefore been appropriated. Moments like this, however, are relatively few in nature as Hawk stresses the commonality between the participants over everything else.

Although not exactly penetrating or innovative with form by any means, “Breaking Bread” is certainly pleasant enough—the chefs we meet all have interesting stories to tell (although the preponderance of male chefs on display is a little jarring) and the long, loving close-up images by cinematographer Ofer Ben Yehuda of the meals being prepared and served will no doubt set stomachs growling. However, it does make one odd tactical error in that after all of film's the buildup to the festival, we only get to see a little bit of the actual event and that is only during the last 15 minutes or so of the movie. Yes, I know the focus is meant to be on the chefs coming together, but it might have been intriguing to meet some of the visitors to the event and get their thoughts on both the food and the ideas being served.

Whatever "Breaking Bread" lacks in artistic ambition, it makes up for with its good heart, sincere intentions, and, most importantly, all of those luscious images of food. (The film’s website offers up instructions to acquire the recipes on display.) If you do see it, just make sure that you leave enough time afterwards to get something to eat—preferably at the nearest restaurant specializing in Middle Eastern cuisine. I guarantee that after watching it, you are going to be very hungry. 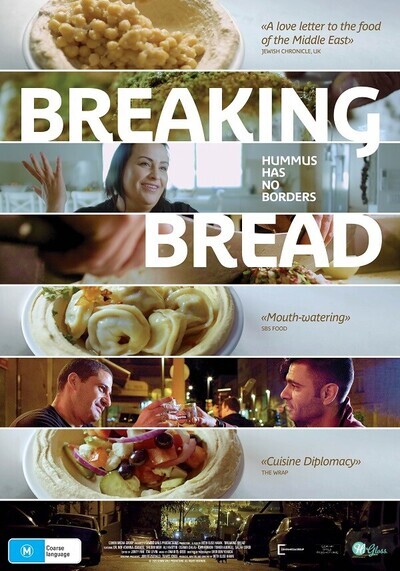 Dr. Nof Atamna-Ismaeel as Self

Shlomi Meir as Self

Osama Dalal as Self

Ilan Ferron as Self

Salah Cordi as Self

Tomer Abergel as Self

Shoshi Karaman as Self

Fadi Karaman as Self