There has been an unexpected mini-trend lately in which horror sequels, not typically a strong subgenre, have been surprisingly strong creatively with films like “Ouija: Origin of Evil” and “Annabelle: Creation,” both better than the movies that preceded them. Perhaps this is what led someone to believe that “Brahms: The Boy II” was a good idea. This person was wrong.

Maybe that’s harsh, but at least that person was wrong with this version of a sequel that even fans of the original probably weren’t really expecting. Given that "The Boy II" arguably works better—and makes a tick more sense even—if you haven’t seen the original, if you’re one of those people turn away now because the ending will have to be spoiled to discuss the new one. You’ve been warned.

The first film was basically a modestly clever cheat, convincing viewers that it was a movie about a possessed doll and then twisting that narrative in the final scenes. The story of a woman who was tasked to take care of a doll as if it was a real boy, and became convinced that it was real only to find that there was a man living in the wall, had at least a bit of simple narrative thrust compared to the nonsensical places that “Brahms: The Boy II” ends up. It’s almost as if someone started the project by asking “How can we get crazier than the ending of the first movie?” And then worked back from there.

Sadly, even posing that question probably makes “Brahms” sound significantly more fun than it actually is. The truth is that it breaks a cardinal rule of genre filmmaking which is that if your film isn’t going to make much sense, it at least needs to be fun. A movie this boring that doesn’t cohere at all narratively is just dreadful. And the worst thing is that there’s a point in the final act when it feels like “Brahms” could have become the crazy movie it needed to at least be memorable, but then it just fizzles to one of those annoying non-endings that makes even less sense than the nonsense that preceded it.

Anyway, back to the story. After a home invasion that’s filmed just horrendously, a mother (Katie Holmes), her husband (Owain Yeoman), and their son Jude (Christopher Convery) move to a country estate that will be familiar to fans of the original. Actually, they move to a guest house on the grounds of that estate, which is only one of many bad decisions here because while the setting was actually an effective element of the first movie, you'll have no such luck here. On the first day there, Jude finds the doll known as Brahms buried in the woods—always a good sign when your kid finds a creepy doll buried with its clothes in a coffin in the creepy woods. But mom plays along. And because of the trauma of the attack on his mother that he witnessed, Jude has gone mute, and Brahms seems to open him up. And possibly make him crazy!

As Jude adopts a creepier posture and dead-eyed stares, mom starts to wonder if Brahms is possessed and ordering Jude around, and director William Brent Bell leans into the idea way more than the first movie that Brahms is animated. We see his eyes and head move in cartoonish, horribly rendered ways, although you keep telling yourself that it could be a product of mom’s trauma, which has been leading her to have a few hallucinations of her own. (And because you're trying to make the movie more interesting.) Things get more intense as Jude starts relaying how unhappy Brahms is with mom and dad. Finally, a creepy guy named Joseph (Ralph Ineson) wanders the grounds with a shotgun, and clearly has either a big secret or is just there for an exposition dump in the final act. (It turns out that he gets to do both.)

Clearly, this film shares some thematic elements with the original, including a woman traumatized by violence who may be going crazy, but almost all of the atmosphere is drained. It’s a film with alternating shots of Katie Holmes looking scared and the doll looking creepy. Rinse and repeat. And it becomes so tediously boring that your mind will wander. (I started to imagine an Annabelle vs. Brahms battle movie.) The biggest problem is that are are no stakes. It’s a ghost story with no ghosts; a slasher pic with no slashing; an atmosphere with no, well, you get it. It’s just a film that’s as blank as Brahms’ expression. And when it finally threatens to fill that space with something interesting? Roll credits before it even gets to 90 minutes. After all, they have to leave something for “The Boy III.” 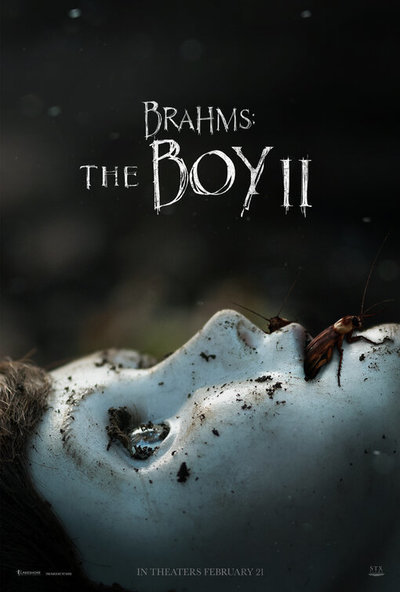