In “Boulevard,” the late Robin Williams plays a man with a secret. His character, Nolan, has muted this piece of his life for over a half-century, as assisted by suburban monotony and a peaceful marriage. His cubicle at the bank boxes him in during the day. At night, his wife (Kathy Baker) has a peaceful distance from his personal life, as they sleep in separate bedrooms. Even his best friend, Winston (Bob Odenkirk), seems to be a good one, but not someone that pays close enough attention to truly understand his friend's life.

"Boulevard" is a movie about choosing truth, regardless of how many years may have been lost to a lie. The catalyst for Nolan's choice is his father's cardiac arrest. After leaving the hospital, Nolan drives down a shadier street of town, and picks up a young male prostitute named Leo (Roberto Aguire). They go to a motel, but Nolan isn't paying for anything sexual; he just wants to talk, to interact with someone that might listen.

The two continue to see each other, of which Nolan is insistent upon paying for his time. Nolan isn’t clear about his intentions, which alarms Leo, but he isn’t malicious about them. Talking to Leo makes Nolan happy, as does the idea of taking care of him. Nolan wants a true connection with a human being. As Nolan spends more time sneaking out to see Leo, the charade of his public life begins to unravel.

Williams and director Dito Montiel are in tune with a pervading sense of tenderness, as the movie distinctly ruminates on connection, not love. Writer Douglas Soesbe does something that's nothing short of miraculous with the presentation of its secret, by stripping it of its sensationalism, and showing how big a deal it is despite the smallness of Nolan's character. The dialogue within Nolan's moments of accepting himself provides for revelatory scenes, especially the spacious conversation between him and his wife, as she expresses her awareness of the situation, but her own resistance to see it change. Montiel's usual dramatic instincts, to go big and brash, are aptly muffled for the most part, except for the couple moments of false intensity involving Leo's abusive pimp Eddie (Giles Matthey).

With dramatic scripts, Williams was a hushed force that offered something painfully human, and a talent who would go to the darkest depths with directors who had the right story (ex. Bobcat Goldthwait’s "World's Greatest Dad," the definitive Williams role in the 2000s). The ingredient he brings most to "Boulevard" is heartfelt empathy, which makes this portrayal heroic. In such a peaceful performance, Williams achieves layers with muted expressions of angst or defeat, and a confident stillness. In his everyman presence, which he achieves before even stepping into the movie's generic suburban setting, Williams is as gentle as he is compassionate for those who live with their secrets daily. Just like with his rambunctious comedy, he plays this character as an accomplished entertainer with nothing to lose.

"Boulevard" is not just the transformation of Nolan, but that of a director. Montiel successfully removes himself from the NYC roots he has reflected upon so often in his films that star male aggression, and he now takes to nondescript suburbs, with an entirely internal character. A display of his potential with bare bone filmmaking elements, along with his able to diversify the energy within his films, “Boulevard” proves a personal success.

The end of the film, which is uncharacteristically upbeat, is tough. Regardless as to how much one may like the movie, it’s a bittersweet conclusion. “Boulevard” has the unfortunate mark in history as being the last on-screen appearance for Williams, and it provides the ending to his on-screen life that tragically doesn’t parallel that of his off-screen one. His soulful work here leaves his career feeling very incomplete; for a few more misguided film choices that he might have made, as popular entertainers always do, there would also be some very special performance vehicles, as with "Boulevard." And they wouldn’t have just displayed proof of his timeless, humble grandeur. They could have done some good for us, too. 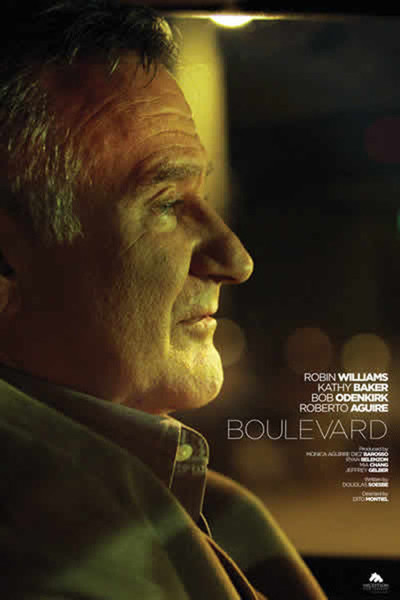