Sacha Baron Cohen's "Borat Subsequent Moviefilm" is a deliciously unstable comedy. This new installment in the misadventures of Cohen's ignorant yet fearless Kazakhstani journalist Borat Sagdiyev is filled with risqué (and just plain risky) jokes. Some land. Others explode in the film's own face like a baggy-pants comedian's prop cigar. That's all true to the spirit of Borat, for better and worse. Even gags that leave a troubling afterimage fit the star's wise-ass, id-monster persona. You can't open a comedic Pandora's box and expect the results to be orderly and reassuring.

The story begins with Borat's release from prison, where he spent 14 years atoning for his shenanigans in the previous film, "Borat: Cultural Learnings of American to Make Benefit Glorious Nation of Kazakhstan." Borat is blamed for the country's political and financial collapse (file footage shows a stockbroker trying to kill himself by jumping from the country's tallest skyscraper, a second-floor office in a muddy village). Like a noncombatant pervert cousin of John Rambo, Borat is given a mission that will redeem and pardon him if it succeeds: he must journey to the United States in order to...

Actually, hold on. We shouldn't get into that, because the described mission is wild and ludicrous and (Rambo-style) is immediately compromised. Let's just say that it involves a monkey (actually a chimpanzee), and that when it doesn't work out, Borat tries to mend fences between Kazakhstan and the United States by offering his only daughter, Tutar (Irina Nowak), as a prize to "Vice Premiere" Mike Pence, whose aversion to spending unsupervised time alone with women is chalked up to his voracious sexual appetite. Tutar, who was raised in captivity on Borat's farm (like livestock, and Melania Trump, the movie insists), has a lot to learn about life, men, sex, and everything, because women aren't allowed to read, learn, drive, or do anything else in her country. Her most treasured possession is a child's bedtime book that depicts the vagina as a toothy maw that will, if touched, swallow the toucher's whole body. (Irina Nowak is an incredible find, if indeed she's a "find." The closing credits claim that the movie is "introducing" her, but media outlets speculate that she's really Bulgarian actress Maria Bakalova.)

There are a couple of other layers to the plot, revealed in due time. But as always, the gags and riffs and characterizations and cultural observations are the point—and the high failure risk, which lends a veneer of excitement even to the dumbest bits. As directed by Jason Woliner ("Nathan for You," "Parks and Recreation"), and scripted by enough screenwriters to field the world's least threatening rugby team, "Borat" stays focused on its core mission: positioning its hero as a depraved, narcissistic fool whose flaws and excesses mirror his clueless targets' so closely that they don't realize they're being made fun of, even when Cohen stops just short of hauling out a sign that reads, "YOU ARE THE JOKE."

At the heart of the film is the belief that, for all its posturing as The Greatest Nation on Earth, the United States circa 2020 has more in common with a retrograde foreign backwater than its government or people like to admit. Borat's country is a kleptocracy that runs on fear, corruption, and theocratic pronouncements that never seem to apply to the people doing the pronouncing. The culture's boundaries are set by a dominant religious sect, but their declarations of the importance of morality, ethics and mutual respect are contradicted by their private embrace (or tolerance) of cruelty, depravity, anti-intellectualism, and superstition, at least when practiced by members of their own tribe.

The horrible belly laughs that are generated when we see how Borat's country treats women (as chattel conditioned to serve men from a young, even pedophilic age—one of Borat's sons even changed his name to Jeffrey Epstein) ring hollow in the memory once we see Borat trying to position his barely-adolescent daughter as a human bribe in the US. A FedEx employee is privy to a fax exchange establishing Tutar as an underage concubine, but he doesn't bat an eye; he might as well be overseeing the transfer of a deed to a 2015 Ford Fusion. A plastic surgery clinic doesn't question Borat's bringing in Tutar for Russ Meyer-scale breast implants, even though she's so young that she needs dad's permission; nor are they fazed when he tries to pay with a bag of cash. The subtext of a lot of the jokes is that the exploitation of women and girls, some below the legal age of consent, is an ingrained perk of being a financially comfortable adult man in the United States, as well as in countries that Americans like to paint as inferior.

The highlight, or low-light, of the movie finds former New York mayor turned Trump advisor Rudy Guiliani participating in a TV interview in a hotel suite with a woman who represents herself as being 15 years old. Guiliani—whose mouth is ringed by pink-and-purple discolorations that suggest either a makeup disaster or the recent removal of an oxygen mask—fails to practice social distancing; coughs on camera; touches the interviewer's hand and creepily flirts with her after learning she's interested in older men; then follows her into an adjoining bedroom with the singleminded eagerness of a dog expecting a biscuit. The Zapruder deconstruction of what follows will vary, probably along partisan lines. What's beyond dispute is that Giuliani's behavior is the maraschino cherry atop the movie's slime cake of male entitlement. His leer could be the film's logo.

Q-Anon comes in for special ridicule by the film, and it's quite pointed: the cult's followers (represented by a couple of survivalist-types that Borat briefly stays with when he's estranged from Tutar) agree with Borat that the Democrats are "demons" and the Clintons are "evil" exploiters, yet they gladly help Borat in his odyssey to deliver his daughter as a carnal prize to a member of the Trump administration. Borat's explanations of his own troubles are dismissed as "a conspiracy theory" by men who believe that a secret, quasi-vampiric cult (a modern gloss on the ancient blood libel) controls the levers of power. The threat of state-approved murder hangs over Borat throughout, thanks to his government's pledge to dismember him should his mission fail. But when Borat performs a song written by his two new buddies at a fair, the audience eagerly sings along with his lyrics about how Covid is "The Wuhan Flu" and the US should chop up journalists "like the Saudis do."

The movie's scripted fiction mirrors the reality that the star captures when interacting with nonprofessionals: there is no agreed-upon morality, ethical code, or national fellowship in America. There is only greed, tribal loyalty, and power dynamics. Maybe that's all there ever was. This is a dark, dark movie, invigorating in its bleakness.

Cohen "retired" Borat in 2007, saying that his disguise-driven brand of satire had become impossible due to his own fame and the instantaneous, identity-checking ability of search engines. And yet here he is fourteen years later, releasing a follow-up that was shot (mostly) under the radar during a pandemic. Some early scenes account for Cohen's inability to work incognito in public: Borat, aka Cohen-in-character, gets recognized by random pedestrians, but their chasing and pestering him for autographs is chalked up to Borat's infamy.

This launches a gallery of disguises that are like something Peter Sellers' Inspector Clouseau would've worn to fool the bad guys, only to arouse a different sort of suspicion. There's a Soggy Bottom Boys-looking "hillbilly" outfit; a Donald Trump disguise that involves a fat suit and a "Mission: Impossible"-caliber face mask and hairpiece; and a "Jew" costume (drawing on Borat's own country's history of antisemitism) with bat wings, talons, and a Pinocchio schnoz.

As you've gathered ("gathered"—like you'd be reading this if you weren't already a Borat fan!) much of the humor is deliberately provocative/offensive/filthy, and while the script has a theoretically progressive agenda (as in Cohen's TV series, and the last Borat film, the hero's misadventures are meant to expose latent American bigotry, depravity, bloodlust, and authoritarianism), the result risks accusations that the creators are trying to eat their cake and have it, too. Is Cohen wallowing in American dysfunction by giving it so much screen time, even as he's putting ironic quote-marks around Borat's in-character "agreement" with it? Is he inadvertently creating YouTube clips and memes that bigots can strip of irony and self-awareness, and fold into the same old rancid propaganda? How responsible is Cohen for unintended consequences?

These are the conundrums faced by comics who incarnate a phenomenon that they want to critique. Some (like Andrew Dice Clay in the nineties) get swallowed up by it, to the point where they become advertisements for the thing they originally dismantled. That's not the case here (yet). But Cohen's always on the edge and sometimes tips over before catching himself (more so in "Bruno," an often homophobic expose of homophobia).

On top of all of the movie's theoretical/political aspects, something more conventional is going on. Although much of the movie is goofy, surreal and scathing, all of the sections that concentrate on Borat's relationship with Tutar are heartwarming. It's that Will Ferrell kind of heartwarming, though, where the script is making fun of the idea of "heartwarming" while still being heartwarming. Imagine the classic road film "Paper Moon" with the father and daughter replaced by sketch-comedy degenerates.

It's fun to see contrary storytelling impulses layered on top of each other, even when (or maybe because) it's hard to tell how much you're supposed to accept at face value, and how much is a put-on. But even as Borat and Tutar become (comparatively) enlightened about culturally ingrained sexism in Kazakhstan and America, the film ties every element to a unifying idea: we think we're making fun of the view through a window, but it's a mirror. 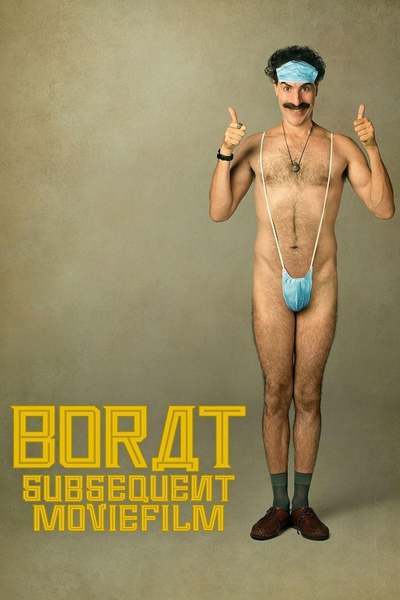 Mike Pence as Self

Rudolph Giuliani as Self

Judith Dim Evans as Self

Writer (based on character created by)