“In 1984, The Books of Blood were published … they shocked and frightened millions of people around the world … this film dares to open those pages again.” These are the words that start Hulu’s very loose adaptation of Clive Barker’s “Books of Blood,” based on one of the most influential series of short stories ever put to the page. While it may seem unfair to compare an adaptation to its excellent source, the creators here lay down that gauntlet right from the beginning, and then fail to meet their own standard.

Originally conceived as an anthology series, "Books of Blood" has now been reduced to an anthology film, three stories with loose connections in terms of plot but all about people who learn that they shouldn’t mess with the other side. If creator Brannon Braga had been allowed to expand this into the series it should have been, it might have worked, but it feels like a half-hearted project in every way in this form. Would I judge this differently if it were three episodes sent to press for a new Hulu series instead of a complete feature? Maybe, but I’d still be nervous about where it was going next.

In one of this production's strangest decisions, only one of these three stories is actually based on a Barker composition, and even that one (the actual story called “The Book of Blood” that opens the anthology) has been liberally altered. The other two are original, reportedly conceived by Braga and Barker. If they were part of a larger series that returned to Barker stories, they might fit in better, but here they feel like they have almost no connection to the anthology collection of Books of Blood, bearing little resemblance to the dark, twisted visions of Barker’s writing. There’s something about Barker that makes him incredibly hard to translate to other mediums—films like “Rawhead Rex” and “Lord of Illusions,” both based on Barker stories from Books of Blood bear this out even further. So I suppose it makes sense that Braga was scared of how Barker’s deeply literary surrealism would work on Hulu. But then why associate the film with such a beloved property? It’s only going to pale in comparison.

“Books of Blood” opens with two criminals seeking payment from a bookseller, who tells one about the existence of a $1 million book and where to find it. Cut from that opener to the story of “Jenna,” starring an effective Britt Robertson as a young woman who flees her home after a traumatic incident and the decision to go off her meds. Jenna has issues with the world around her, particularly the sounds it makes. The emphasis on the creepiness of human mouth sounds like chewing does feel very Barker, and Jenna wears noise-canceling headphones to drown out the world. She ends up at a bed and breakfast, where she learns that leaving home is the worst mistake she’s ever made. Robertson gives the best performance in the film and, to be fair, an arc here about things hidden in the walls also feels distinctly Barker—picture what was hiding in an average house in “Hellraiser”—but Braga can’t find the grisly tone this story needed overall, letting it drag in a way that gets less and less interesting.

Anna Friel anchors the second story, “Miles,” as a woman who grieves the loss of her son when she’s approached by a man (Ravi Gavron) who claims to be able to communicate with the dead boy. Like the character in the first short story in Books of Blood, he has been chosen as the vessel to tell the stories of the dead, but this version of the character has a dark secret. Friel is solid and Braga creates more of the right bloody tone here, but it feels distinctly like an introduction to an anthology series more than the centerpiece of a film.

“Books of Blood” circles back around to its first story (and then its second and third again) in the final stretch, attempting to tie together an anthology film into something that’s kind of one story when one sits back and looks at the whole picture. Sadly, what it’s trying to do in this form is a little blurry, especially with a cheap twist involving Jenna, and worst of all it's boring. Anyone who’s read Books of Blood will tell you there’s nothing boring about them, even at their worst. The greatest sin here is that "Books of Blood" is too generic to be remembered, despite bearing the name of someone who redefined the genre. 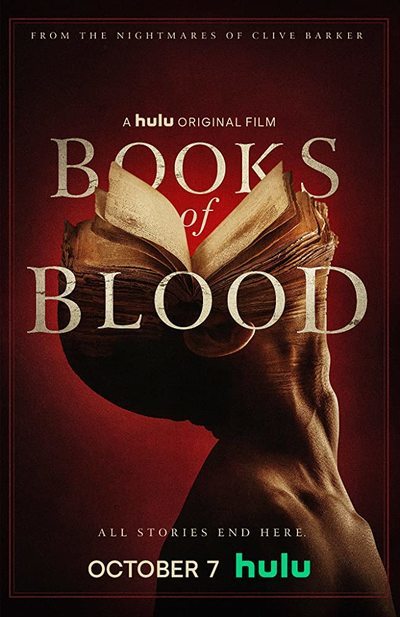