A Danish revenge Western starring Mads Mikkelsen, huh? If the credited director were Nicholas Winding Refn, the idea could pass for a “Funny or Die” pastiche. A little bit inside, admittedly—one needs to be a real up-to-the-minute cinephile to get the joke, but it’s pretty…evocative. But as it happens, “The Salvation,” a Danish revenge Western starring Mads Mikkelsen, is a very real movie, and it is directed by Kristian Levring (“The King Is Alive”), whose sensibility is a little more nuanced than that of the sensationalist Refn, which is all to this movie’s benefit.

Viewers who only know Mad Mikkelsen as the title character in the ultra-creepy NBC series “Hannibal,” or recollect his teardrops-of-blood turn as Le Chiffre in the Bond reboot “Casino Royale” may have trouble imagining him in a role as anything other than a stolid terror. His broad shoulders, often stiff bearing, and finely sculpted but almost over-definite facial features—broad brow, skyscraper-high cheekbones, a mouth like a closed switchblade—don’t fit the profile of the devoted husband and family man that Mikkelsen plays at the opening of this movie, which takes place in the American West of the 1870s. The thing is, of course, that Mikkelsen’s a damn fine actor, and as Jon, a Dane come to America to escape the aftermath of a war in his home country, meeting his young son and reunited with his wife after seven years apart, he brings a lot of heart to the train station meeting with which this film opens, complete with gorgeous rock-formation vistas and stirring Morricone-like music on the soundtrack.

However. Mikkelsen does not get to play the kind, devoted husband and father for too long. Soon both wife and son are, well, dead, and Jon has taken swift revenge on the dirty rapists and killers responsible. It’s at this point that a viewer might be truly grateful that the movie wasn’t directed by Refn, for fear that Refn might depict Jon, I dunno, bathing in the entrails of the men who destroyed his family. No, Jon merely shoots them, and the violence is brutal, and fittingly so, but it is not carried out to cartoonish extremes.

Since this is not just a Western but a homage to Westerns (one wonders whether it’s possible in this day and age to make a Western that’s not), and since all he described action takes place in the first fifteen minutes of a 90-minute movie, that of course can’t be the end of it, and as it happens, and should surprise no one, the dirty dogs that Jon killed happen to have a fairly prominent dirty dog relative/associate. Enter Jeffrey Dean Morgan’s Delarue, a gang leader and “boss” who’s got the “good” people of Jon’s town well and truly under his thumb. He vows vengeance on the killer of his younger brother (for he was one of the two dispatched by Jon) not just on his behalf but on that of his brother’s widow Madelaine, a beauty with a slashed-up lip that just won’t seem to heal, and whose disinclination to speak is soon revealed as an actual inability. Delarue’s a real horror show, as his adoption of Madelaine more than aptly demonstrates, and the way that the townspeople bow to his will (Jonathan Pryce’s undertaker character is particularly obsequious and weasely) is both deplorable and kind of understandable.  But summoning the steely implacability that’s become a hallmark of his performing style, Mikkelsen transforms into a merciless, quiet force of vengeance; working with brother Peter (Mikael Persbrandt) a somewhat more voluble and crafty character (the way he manages his escape from jail is one of the film’s standout scenes), he makes the evildoers pay, even as the audience is made to keep guessing as to whose side the silent Madelaine, a key game piece, is on.

It’s all quite engaging, beautifully shot and staged, with very satisfyingly choreographed action scenes. It is not a particularly light-hearted Western but it’s also neither portentous nor pretentious, and it doesn’t wear out its welcome. Some of the CGI-enhanced shots of evocative Western landscapes are a little TOO evocative, that is, picture-perfect, but what are you going to do. I’ve seen homage/pastiches commit much worse in the way of sins. 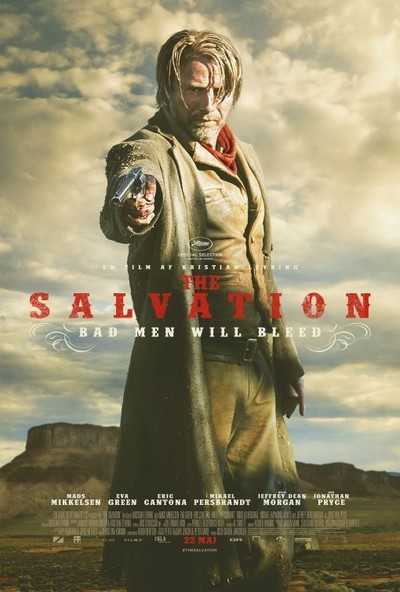