A B-movie that turns its violent rage on corrupt Los Angeles cops should be better than "Body Cam." Unlike so many cheap horror films that show their flaws most explicitly during the scare scenes that are overly reliant on loud music, quick cuts, and attempts to make you jump, it’s really everything but the big moments in “Body Cam” that falls apart. The set pieces—including a great one in a liquor store—nearly justify a look, especially for horror fans. But everything else? The plot is so predictable that it’s boring, the performances are so flat that they approach Tommy Wiseau-levels of affectless oddity, the dialogue desperately needed a rewrite to sound like something human beings actually say, etc. If you’re such a horror fan that a couple of really well-done grisly sequences are all you need—look no further. Even during a pandemic, I need just a little more than that.

A cop (Ian Casselberry) pulls over a van with no plates on a rainy L.A. night. There’s increased tension in the air of the City of Angels because of recent violence between the police and the citizens they’re supposed to protect. The cop orders the driver to get out of the car and can sense something is very wrong. A trembling, frightened woman (Anika Noni Rose, who deserves so much better than this non-part) emerges and the cop goes flying into the air.

A flashback that loops us back to the van scene introduces us to our real protagonists—Renee (Mary J. Blige) and Danny (Nat Wolff). Of course, Renee is coming back to the force after some time away due to trauma and Danny is young enough to be called the new guy even though he’s really not. Both are two-dimensional character traits designed to give a little bit of depth to the script but ultimately feel cheap and generic. Even the racial and gender dynamic of Renee feels woefully unexplored and could have added a much-needed layer of social commentary.

Renee and Danny come upon the scene with their colleague after the fact and discover carnage. A fellow cop has been brutally murdered and Renee sees something supernatural on the dash cam footage, just before it disappears forever. Of course, Renee is going to be the only one who knows the truth as a force works its way through the, well, force, cleaning up some dirty cops in ways that would make Candyman cringe. Reliable character actors like David Warshofsky and David Zayas fill out the cast, but this is really just a piece about Mary J. Blige looking through dark rooms with her flashlight for what seems like forever.

“Body Cam” has a fatal pacing problem. There are sequences of exploration by flashlight that feel like they’re never going to end, wherein tension turns to boredom. And Blige, an excellent actress in “Mudbound,” is simply poorly directed here. It's the only way to explain it. She’s capable of great emotion and depth, but she looks half-asleep at times, barely interested in the film she’s making. Part of the problem is the tinny dialogue that sounds like it was pulled out of a cop movie cliché handbook. There’s not a single scene of believable character interaction in this movie.

But then there are those scenes. They’re the ones anyone who pays to rent “Body Cam” will talk about. The first and best is at a liquor store, where two cops see the van from the opening sequence and stop to investigate, unaware that there are two other armed men in the store already. Let’s just say it gets surprisingly violent and Vitthal proves to be a deft director when it comes to spacing physical action, moving frightened bodies around a relatively small area and producing shocks in the process that don’t feel cheap. It’s amazing to watch a relatively inert movie that relies way too much on rain and darkness suddenly become something else entirely. Perhaps that was Vitthal’s intent—to make a film that bursts with violence like the world too often does between citizens of L.A. and the people who are supposed to protect them. But imagine if the world between these operatic bursts of carnage felt real and captivating. Imagine how much more impact they would have. As is, they’re just stand-out moments surrounded by material that isn’t worth anyone’s time. 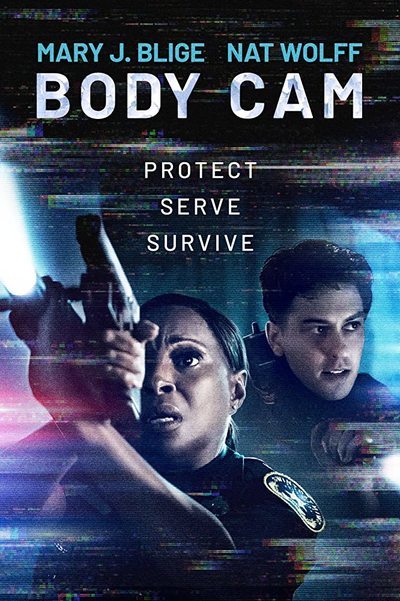 Rated R for bloody violence, grisly images, and language throughout.