A lot has been written about the visual style of "Blood Simple," but I think the appeal of the movie is more elementary. It keys into three common nightmares: (1) You clean and clean but there's still blood all over the place; (2) You know you have committed a murder, but you are not sure quite how or why; (3) You know you have forgotten a small detail that will eventually get you into a lot of trouble.

"Blood Simple" mixes those fears and guilts into an incredibly complicated plot, with amazingly gory consequences. It tells a story in which every individual detail seems to make sense, and every individual choice seems logical, but the choices and details form a bewildering labyrinth in which there are times when even the murderers themselves don't know who they are.

Because following the plot is one of this movie's most basic pleasures, I will not reveal too much. The movie begins with a sleazy backwoods bar owner's attempt to hire a scummy private detective to murder his wife. The private eye takes the money and then pulls a neat double-cross: He shoots the bar owner who hired him. That way, the killer keeps the money and eliminates the only witness who could, implicate him. Neat.

Meanwhile, the bar owner's wife has fallen in love with one of the bartenders. They know nothing about the private eye, even though they know somebody has been following them. So, when the bartender finds the bloody body of the bar owner, of course he thinks the guy was killed by the wife. But . . . and I will not breathe another word.

The movie has been shot with a lot of style, some of it self-conscious, but deliberately so. One of the pleasures in a movie like this is enjoying the low-angle and tilt shots that draw attention to themselves, that declare themselves as being part of a movie. The movie does something interesting with its timing, too. It begins to feel inexorable, Characters think they know what has happened; they turn out to be wrong; they pay the consequences, and it all happens while the movie is marching from scene to scene like an implacable professor of logic, demonstrating one fatal error after another.

"Blood Simple" was directed by Joel Coen, produced by his brother, Ethan, and written by the two of them. It's their first film, and has the high energy and intensity we associate with young filmmakers who are determined to make an impression. Some of the scenes are virtuoso, including a sequence in which a dead body becomes extraordinarily hard to dispose of, and another one in which two people in adjacent rooms are trapped in the same violent showdown. The central performance in the movie is by the veteran character actor M. Emmet Walsh, who plays the private eye like a man for whom idealism is a dirty word. The other actors in the movie are all effective, but they are obscured, in a way, by what happens to them: This movie weaves such a bloody web that the characters are upstaged by their dilemmas.

Is the movie fun? Well, that depends on you. It is violent, unrelenting, absurd and fiendishly clever. There is a cliché I never use: "Not for the squeamish." But let me put it this way. "Blood Simple" may make you squeam. 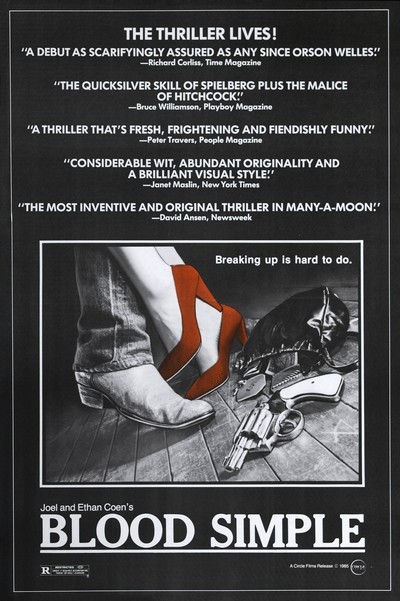