Blind can refer to a physical disability. Or blind can be a state of mind. Both meanings exist in the most literal of ways in “Blind,” the movie. One doesn’t need perfect vision to quickly surmise that this sudsy affair among Manhattan swells is a glorified Hallmark Channel melodrama. In fact, it is so predictable and old-fashioned, “Blind” could pass as a recently excavated and slightly musty VHS tape from an ‘80s time capsule, especially judging by the shady Gordon Gekko-ish insider-trading shenanigans that open the film.

Consider that “Blind” features a pink envelope scented with Chanel No. 5 tumbling out of a suitcoat pocket to signal adultery. That it somehow finds room for namedropping both “Anna Karenina” and “The Karate Kid.” And it even relies on that perennial staple of grief cinema—listening to the phone messages left behind by a deceased loved one.

Adding to the flashback feel is the casting of Dylan McDermott, Demi Moore and Alec Baldwin, all now members of the 50-something club, who were up-and-coming whippersnappers back when Reagan was in office. At least this trio can still summon just enough star shine to keep audiences mindlessly crunching their popcorn. That is especially true of Baldwin, whose Trump-inspired antics both on “Saturday Night Live” and in the animated hit “The Boss Baby” have elevated his presence of late.

Harder to swallow is the stale taste left behind by what happens onscreen in “Blind,”  the directing debut of Michael Mailer (eldest son of novelist Norman Mailer), with a script by brother John Buffalo Mailer. Here is a sample: In an early scene, a high-stakes power couple, consisting of a hubristic wheeler-dealer Mark Dutchman (McDermott) and Moore as his chilly yet compliantly dutiful trophy wife Suzanne, are preparing to head out to celebrate their 19th anniversary. Running late, she is on the phone on one side of the wall in their bedroom making sure they can keep their dinner reservation. Meanwhile, he is on the phone on the other side plotting to engage in some unethical financial deal. But before they leave, he presents her with a box. What could it be?

Of course, it’s that most ancient of high-end, guilt-assuaging spousal gift clichés, a diamond necklace. He lovingly places a cascading waterfall of jewels around her neck while the city that provides their panoramic penthouse view seemingly glitters with envy in the nighttime sky. But, in this case, it might as well be a choke collar.

While in the car later, Mark’s true alpha nature comes out when his wife tells him she would like to go back to work as an executive editor. He forbids it because, “I need all your attention on me right now, all of it.” It is easy to surmise that this me-first dude will soon get his just deserts. Payback, in fact, is just around the corner after a business associate is caught in a sting involving an undercover cop posing as a hooker. To save his skin, he rats out Mark. Soon Mr. Big is bedecked in drab prison garb and no chance of bail. Nonetheless, this wolf of Wall Street assures Suzanne, who is blithely unaware of whatever her underhanded hubby has been up to, that they and their pampered lifestyle will be just fine despite stashing his illegal gains in their private family account.

This is where Baldwin’s Bill Oakland comes in. The famous novelist lost his sight in a terrible car accident that took his wife’s life. Now a writing professor at NYU, he relies on others to read aloud the work of his students in a makeshift office in a center that provides help for the sight-impaired. Is he bitter? Yes. Is he demanding? Of course. Does he yell in frustration when his assistants don’t meet his exacting standards? Naturally. Most of his helpers end up skittering away in despair. But volunteer Gavin (newcomer Steven Prescod, bringing some much needed diversity to these very white proceedings) is apparently the world’s biggest Bill Oakland fan and is quite happy to subject himself to his idol’s abuse. But then Suzanne quickly spoils it all by fulfilling her court-ordered 100 hours of community service by unceremoniously (save for the sugar-cube-sized diamond chunk on her finger) taking Gavin’s place. It’s an awkward sort of plot turn that transforms the young wannabe scribe into a housekeeping protégé and worshipful companion for Bill, one who takes advantage of his blindness in ways we are supposed to somehow overlook.

While the big mean hubby is locked away, Suzanne and Bill—who initially clash like entitled titans—will eventually hit the hay with foreplay in the form of her shaving away his ages-old stubble with a straight razor right in his office. I prefer smooshing wet clay together while canoodling at a pottery wheel, but that’s just me. But then, in one of the hoarier turns of events, Mark is released because somehow his associate and lone witness oh so conveniently dies after being hit by a bus. Confrontations and resolutions follow, ones that you will see hurtling toward you at least 45 minutes earlier.

I am glad that Moore and Baldwin—who is also an executive producer—had a chance to join forces again and help erase any lingering ill will from their only other collaboration, 1996 flop “The Juror.” But the strain of lifting this dated material off the ground shows. About the only early word of mouth on “Blind” came from disability advocates who protested how the film treats blindness “like a costume.” If “Baby Driver” was able to hire a deaf actor to play a hearing-impaired character, they might have a point. But this is probably the wrong film to start a debate about such authenticity.

If you stumble upon “Blind” one day, at least stay through the closing credits. You will hear Robert Redford sing a duet on a song called “Bird in a Cage” and it isn’t half bad. 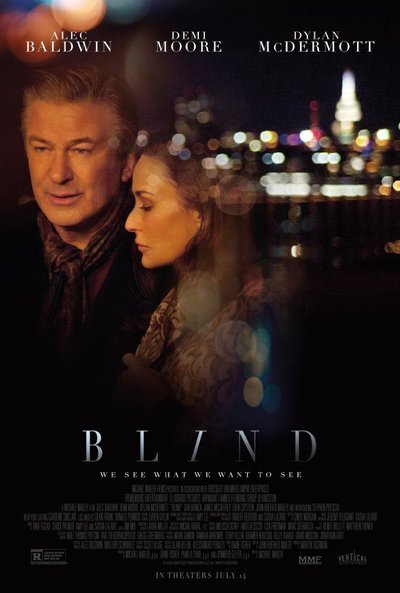 Rated R for language including some sexual references, and brief drug use.