"Bleed for This" starts out like a traditional underdog-fighter-makes-good flick, based on a true story, pivots and becomes something else, then goes back to being traditional.

Miles Teller plays Vinny Paz, aka Pazienza, aka The Pazmanian Devil, an Italian-American junior welterweight fighter from Rhode Island. He's a likable, young, working class guy who doesn't take the sport as seriously as he should. He barely makes weight and stays out all night before fights blowing his money on gambling. His domineering dad (Ciaran Hinds) hooks him up with legendary trainer Kevin Rooney (Aaron Eckhart), one of the wizards who helped channel Mike Tyson's rage. It's Rooney who recommends that Paz move up one weight class, a bold move. Everyone else in Paz's circle (including his manager Lou Duva, played by gravel-voiced character actor Ted Levine, who's never looked worse or more weirdly compelling) thinks it's a bad idea. But it turns out to be a stroke of genius. Paz becomes not just a winner but a sensation, beating champ Roberto Duran (Edwin Rodriguez, radiating intelligence and focus) and priming himself for stardom.

Then he gets blindsided by life: a car slams into him head-on as he's driving to the Foxwoods casino in Connecticut and throws his vehicle into a ditch. His spine is damaged. He has to wear a "halo" to keep his head upright; it sits on his shoulders like scaffolding, but despite the theologically loaded name of the device, director Ben Younger ("Boiler Room") and cinematographer Larkin Seiple restrain themselves from playing up the Christ-crucified parallels that are sure to form in viewers' minds. The doctor tells him not only will he never fight again, he'll probably never walk again. Undaunted, Paz charms Rooney into undertaking a secret training regimen in his parents' basement, and the film becomes a recovery story. The emphasis is mainly on what the injury does to Paz's body, and how he manages and transcends the pain: a mind-over-matter narrative.

The problem, though, is that we never get enough sense of Paz's interior life to judge this movie as anything other than a comeback story about a nice guy who got knocked out by the cosmos and hauled himself up. Its modesty is welcome, and its deep knowledge of boxing pictures and sports weepies helps the story glide along. Still, there's a deeper, more powerful tale here that remains frustratingly untapped, maybe because the film knows that if it got too messy, contradictory or raw, it would lose the "inspirational" label and become art.

Many reviews of this film have complained about how predictable the story is, which seems like an odd complaint, given the script's basis in fact. But if you think of "Bleed for This" in terms of a commercial drama rather than as a simple story of a man rebuilding his life, you might have to admit they're on to something.

The direction, the photography, the editing, the production design and most of the performances are on point. And there are ways in which "Bleed for This" transcends cliche—mainly in the sociological margins of the story. We get more journalistic details than pictures like this often provide: the scene-setting driving shots of Providence and leafy surrounding counties, the texture of the wood paneled walls in characters' homes, the cigarettes they smoke, the beer they drink, and the cadence of their talk, which often revolves around men expressing love by busting each other's chops. "You get cable with that thing?" Rooney asks Paz, indicating his halo. "You got heart, kid," Duva tells Paz, "but you wear it on your fuckin' chin."

The film excels in its portrayal of what it means to be injured. Too many boxing films downplay the fragility of the body, unless a hero is being warned that if he keeps fighting, he'll go blind or suffer brain damage (he always disregards the warning and wins anyway). The middle section of "Bleed for This," which focuses on Paz and Rooney's secret rehab project, is an exception. We see Paz sneaking into the basement, gingerly sliding onto his weight bench, and trying to bench-press a barbell he hasn't touched in years, then removing weight after weight until only the bar remains. The first rule of rehab is "start small." It's great to see a movie not only acknowledge this reality, but make the man embracing it seem heroic.

But the movie has major problems. The biggest is Teller, a committed and likable actor miscast as Paz. You're aware of how hard he must have worked to get in shape, sell the accent, get the demeanor right, and so on, but he's never wholly credible as the hero. This performance feels built from without, not found within. Teller lacks the affable meathead quality that made Mark Wahlberg so compelling in "The Fighter," the movie that this film's modern, white ethnic, working class setting evokes. He's just right in films like "The Spectacular Now" and "Whiplash," playing nonviolent guys struggling with specific personal demons, but I never bought him here as an Italian-American, a guy with a working class sensibility, or a boxer who's driven and skilled enough to win five world titles in three different weight classes (lightweight, junior middleweight and super middleweight). He's bouncy, even chirpy, verging on Tom Hanks or John Cusack in light-comic-lead mode, and while he gets certain signatures right in the ring (such as Paz's whirligig punch) the editing and camerawork often seem to be doing too much of the work for him (when he throws a flurry of combinations, he looks like he's dog-paddling).

To be fair, the writing and filmmaking are probably as much at fault as Teller—actors are only as good as their collaborators and their material—but it's a debilitating strike against the movie. The supporting cast, though, is flawless, especially Katey Sagal as Paz's mom, who listens to fights from the next room because she can't bear to watch her boy get hit on TV, and Eckhart, whose transformation into Rooney is both emotionally and physically complete. He seems to have made himself shorter and changed his bone structure, which is not something they teach you at Stella Adler. When his character appeared onscreen for the first time, I mistook him for Dean Norris. Teller can't keep up with any of them. He's a promising junior welterweight, and this is a heavyweight cast.

The frame the movie puts around Paz's comeback is iffy, too. It's unabashed in telling us that Paz reset his life through optimism, stubbornness and hard work. There's no denying Paz's achievement, but it's one rarely shared by people who've suffered massive physical trauma, and it would've been nice if the film had acknowledged that. As is, there are scenes and moments (particularly during Paz's closing interview, a bewildering mistake) where "Bleed for This" seems to be suggesting that if Paz did it, you can, too, and if you can't, it's because you didn't try hard enough. That surely wasn't the point, but it's what comes across, and it gives what might otherwise have been a pretty good, occasionally inspired sports movie a sour aftertaste. 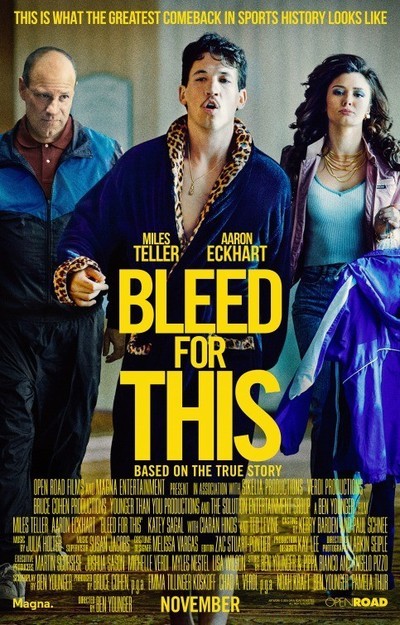 Rated R for language, sexuality/nudity and some accident images.