Ethan Hawke’s easy-to-like “Blaze” is full of country-spun wisdom like “Rain doesn’t try and fall, it just falls” and “Wherever I’m going, it’s the same place I’ve been.” Clearly inspired by his work on the underrated “Born to be Blue,” the Oscar-nominated actor/writer/director has crafted a film that attempts to capture the spirit of its subject not merely through an ABC chronology of his life but through a structure that reflects his art. At its best, “Blaze” feels like a cinematic translation of not just Blaze Foley’s life but his music, anchored by two incredibly likable, lived-in performances. Its shapelessness can sometimes get the better of it, especially during the second hour when the “montage set to a Foley song” approach starts to wear thin, but it’s a high compliment to how much this film conveys the genius of its subject in the fact that I’ve wanted to listen to almost nothing but Blaze since it ended.

If you don’t know the name Blaze Foley (played by Ben Dickey in the film), you’re not alone. He was something of a contemporary of people like Merle Haggard, Willie Nelson (who recorded one of his songs), and especially the brilliant Townes van Zandt, who was actually a friend and collaborator. Foley had a few minor hits that obviously inspired current alt-country artists like “Clay Pigeons” and “If I Could Only Fly,” but he essentially lived up to something he says in Hawke’s film: “I don’t want to be a star, I want to be a legend.” He was never quite a star, but he was a legend to the people who loved him.

Hawke wisely avoids too many of the biopic traps that have the potential to sink any country singer story post-“Walk Hard” by sticking to three major storylines at three different points in history. One of the major framing devices of “Blaze” is a radio interview being done with Van Zandt (Charlie Sexton) and one of Foley’s best friends and collaborators, Zee (Josh Hamilton, having a hell of an indie movie summer with this and “Eighth Grade”). It allows the two gentlemen to reminisce about Foley with the occasional prodding of the interviewer, voiced by Hawke himself. The film also flashes back regularly to the last night of Foley’s life, during which he recorded a live album in a seedy Austin bar. This vision of Foley—fatter, drunker, sadder—is contrasted with his relationship with Sybil Rosen (Alia Shawkat), who a younger Foley met in an artist’s community years earlier. Sybil was Blaze’s muse, the one who inspired so much of his music and encouraged him to move to Austin and become a singer. Of course, Foley’s touring and drinking would tear his relationship apart, but the core of “Blaze” is still that dynamic in which one person helps bring out the artistic dimensions of another.

There’s a lot to like about “Blaze,” but it’s the scenes between Shawkat and Dickey, the ones in which love is helping produce creative inspiration that really stand out. It feels like something very personal for Hawke—he’s clearly had a few people who romantically inspired him to greatness at his craft in the past—and you can see his heart reflected in it, both when it’s great and when it collapses. It helps that Dickey and Shawkat have stunning chemistry, not just totally embodying these characters, but understanding how they influenced, inspired, and infuriated one another. They’re two of the most consistent and fascinating performances of the year.

“Blaze” only falters, ever so slightly in the second hour (of an over-two-hour film) when Hawke’s use of montage starts to feel like a crutch. It’s fine in the first hour, but when we’re still watching highlights of happier times set to sad Foley music, it creates a distancing effect, too much like a music video for a movie that generally has so much heart.

It’s a minor complaint for a haunting film. Hawke’s understanding of the Austin creative scene and his gift with performers was something easy to predict given his track record, but what is most likely to stick with me regarding “Blaze” is the imagery. It’s a visually striking film, whether it’s a shot of Blaze Foley lit red against a flag during his last show or the heartbreaking visual of a dying father hearing his children sing. Hawke has clearly translated the emotions produced within him when he listens to Blaze Foley’s music into something visual and cinematic, while also avoiding the usual genre cliches. What more could you ask for from a biopic than that? 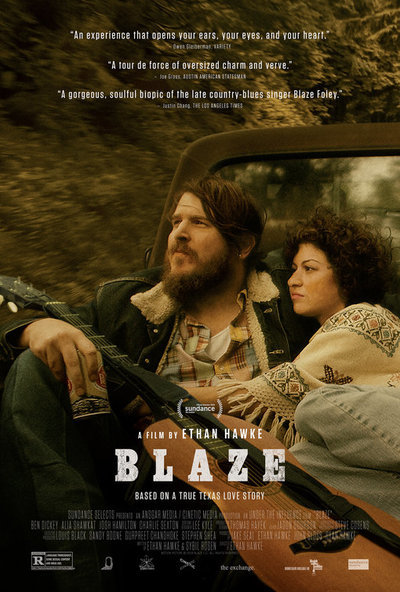